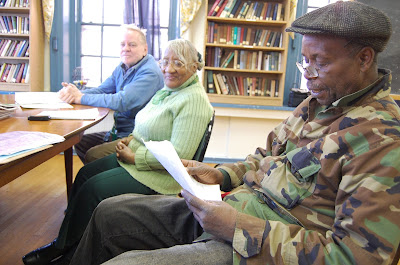 I love it when our senior buds tell stories about how they went against tradition in their youth and instead went with their heart. And decades later, through stories, they are here to tell us that they are still sticking to their decisions. I really love that. Below is Norman’s memory of how everyone gave him a tough time for choosing to attend a certain high school.

1954. When I decided to attend high school, I broke a neighborhood tradition by not choosing West Philadelphia High School or Overbrook High School. Instead I chose John Bartram High School. The neighborhood youth were not impressed with my decision. To them it was as if I was abandoning the crew and had become a traitor.

Two peers, a girl and a boy, let me know how they and others felt about my decision to attend Bartram. First Vivian, a senior at Overbrook High, who was four years older than I and who was a play-big-sister and former babysitter voiced her displeasure with me. Her main argument was Bartram’s low rating in the high school athlete system; because, after all, Wilt Chamberlin was a product of Overbrook.

The next person to question my decision was my next-door neighbor, Jimmy, who was a freshman at Overbrook. His message did not contain anything about sports, but rather, safety. He said that I would have to cross 49th and Woodland on route to Bartram. He went on to say how this corner was dangerous, mentioning names of some of its most notorious members, among them, Foots. I still opted to attend Bartram. Once there, I did run into Foots, he was a senior and was not a terror. He became my mentor, best friend, daughter’s Godfather, etc.