Announcing our new group and blog at Pitman Manor, NJ! 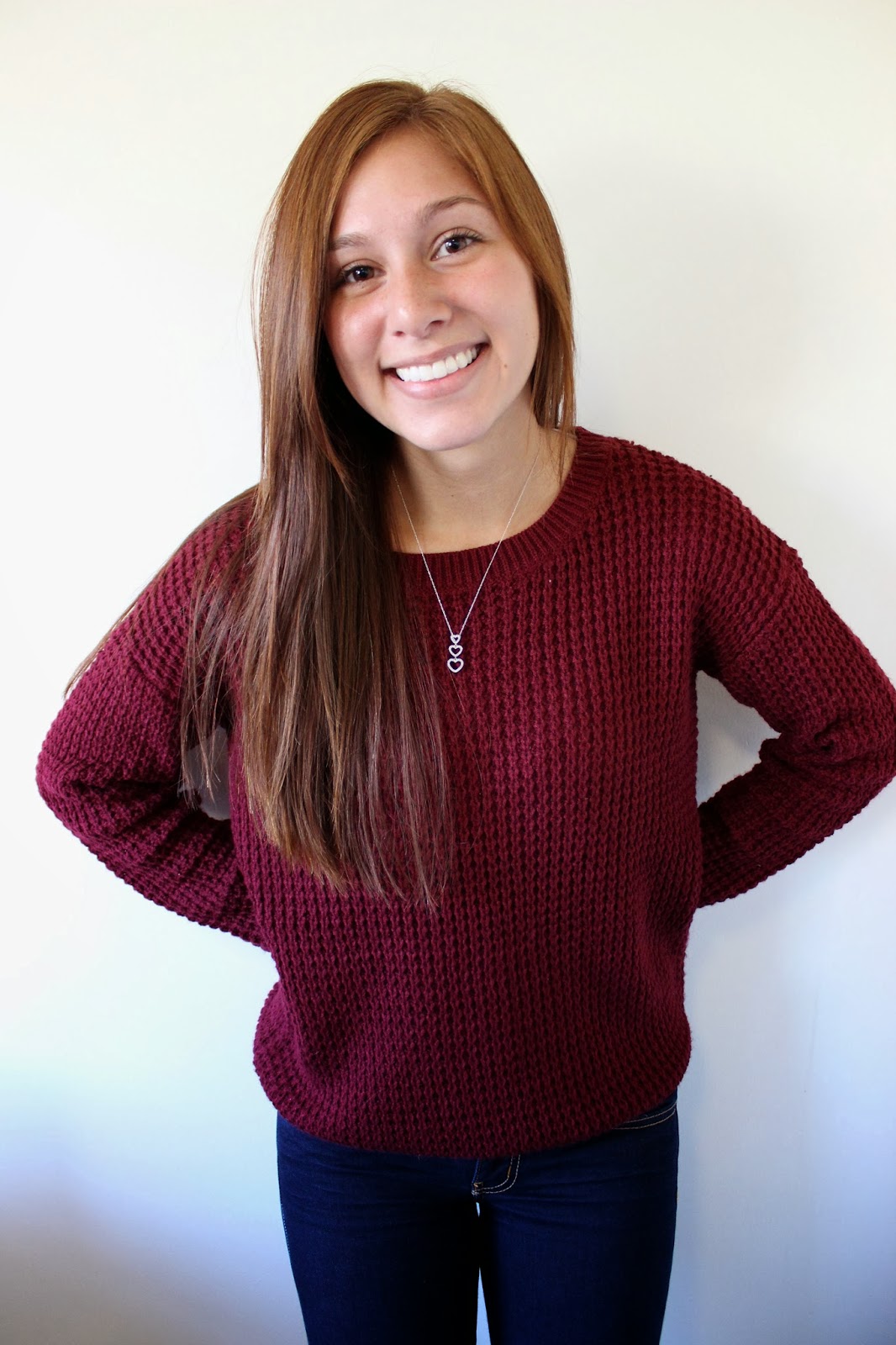 GO, PITMAN!!!! I am so excited that I can't contain myself... our group at Pitman Manor in New Jersey is all set up and the blog is live: http://bestdaysofarpitman.tumblr.com/

Meet Ashley Force, the people-loving, life-loving, radiant 21-year-old powerhouse who is serving as our Pitman group's facilitator, and who in Best Day of My Life So Far fashion is also the voice on the group's blog. Ashley is a junior at Rowan University studying broadcast journalism and hopes to one day become a news anchor.

Over the past few months, I've loved getting to know Ashley and sharing my facilitating "secrets" with her. Not only am I confident she will make a great facilitator (and future news anchor!!) I have zero doubt that you too are going to love getting to know her through her ongoing blog posts!

Remember to:
to receive stories from our Pitman group, as well as our original Philadelphia group… and soon-to-be-announced groups around the country!

Click Here to reread a blog post by Pitman's Coordinator of Volunteer Services Sharon Yesner entitled "Why I Love the Best Day of My Life So Far Program."

Brenda S (A Salute to My Mentor) 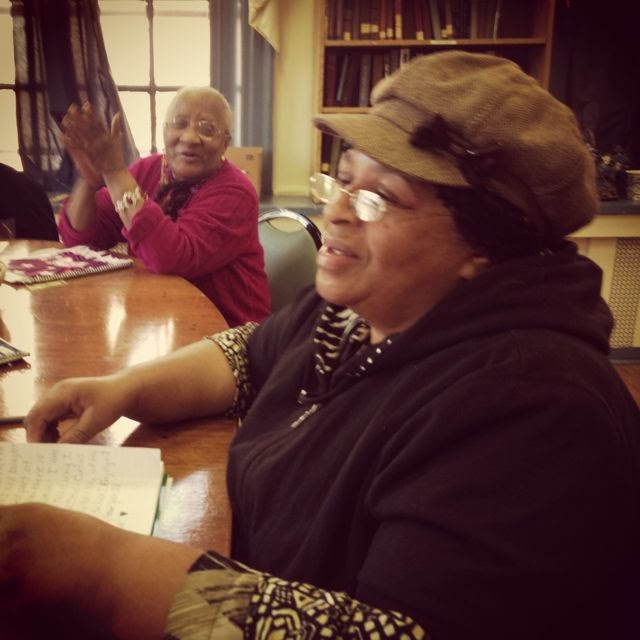 The Best Day of My Life (So Far) has 3 anniversaries that mean a lot to me every year:

2. The first session of our founding group, deep in the basement of Philadelphia Senior Center, on September 24, 2009.

3. The session following Martin Luther King Day in 2011. That session was on January 20, 2011… which happens to be MLK Day this year, today!

The first two may be self-explanatory… "But why the third?" you may ask.

Because that one session, 4 different seniors spontaneously, unpromptedly, felt inspired to write about their reflections of him, including childhood memories of hearing him speak - in person! Afterwards, I wrote here on the blog, "Huddled around the same table with my senior buddies, I was just one degree away from Dr. Martin Luther King himself. How surreal is that? Who needs time travel? Past and present – I realized there is no real line between the two." You can reread the blog post Here.

That day forever changed my perception of "the past". I began to see history in present-tense. From the larger-than-life Martin Luther King to personal mentors who left a mark more softly in our lives, through our seniors' stories, their spirits live on.

Today my thoughts are on mentors.  This past Friday, January 25, 2013, I went to New York.  The occasion for my journey was to celebrate the eightieth birthday of one of my mentors.  The name of the celebrant is Mr. Eugene M. Brown.

When I was in high school, I loved to swim.  The recreation center I belonged to was run by the Children’s Aid Society.  Every day after school, you could find me at the swimming pool practicing my swim strokes or my kicks so I could qualify for the swim team.  Mr. Eugene M. Brown was our swim teacher and coach.  We would practice under his supervision.  I would hear him say, “Straighten your arms, put more power in your kick, use the kick board”.  We also trained with weights on our ankles so that we could develop strong and powerful kicks, in order to win at the swim meets.

Mr. Brown was instrumental in my life and all of our lives.  He required of us: excellence, training, education, personal appearance and good manners.  He has impacted and imprinted on each of our lives and helped us to become the persons and people we are today! 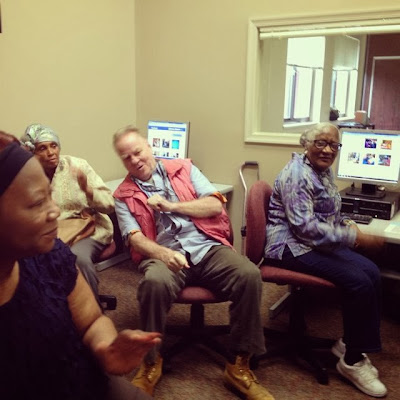 If I had to make a list of top 5 feelings in life, somewhere on that list would be the feeling you get when you’re having a great time with great friends. You know what I mean, right? Just that feeling that washes over you right when you are in the middle of hanging out, having fun, being silly or maybe acting a little stupid ;) and makes you think, Right here right now I am having the time of my life!! When I read Big Mo’s childhood stories about things he did with his friends, that’s the feeling that I always get. It’s like he has bottled one of the very, very, very best feelings into his stories, so we can all take a little sip any time we want. Icy lemonade on a summer day, hot chocolate on a winter day, Mo’s stories any time any day, yeah, that’s the effect Mo has on us, and that’s pretty awesome.

Actually we were in our under shorts.  The girls wore T-Shirts also.  We would be celebrating spring by tiptoeing into creeks or ponds within a few miles of our homes.  Lots of laughter and wise cracks from about 5th grade to 8th grade when it was obvious that we could no longer be co-ed without blushing and/or embarrassment.  It was always a wet, cold walk home.  Nobody had towels and nobody was allowed to use these private waterways.

The Delanos twins, Frankie and Anita, and little sister Joannie and their parents lived in a house next door to my parents’ bar.  Frank was two years behind me and one year behind my cousin Johnny at the Catholic grade school.  When my dad would drive us to the seashore, my cousin Joey who was three years older would babysit us in the back of the pick-up truck with a few lucky other little guys.  Dad and one or two other men in the front of the truck would go to the race track in Atlantic City while we all went to the beach.  Joey was our idol so there were no problems at the beach.

Seeing Anita and Joannie waving goodbye to us as the truck pulled away was a beautiful sight but there also was a twinge of sadness in their beautiful faces. It didn’t seem like girls had as much fun and that wasn’t fair!


Mo McCooper
3.31.2011
Pike’s Peak
On the edge of town, we lived the an apartment over a tavern on the highway and  my cousin Joey, who was 3 years older than I, would come to take me places.  Sometimes my mom, his Aunt Katy or my mom’s little sister who I knew as Aunt Nancy would give Joey some change for ice cream cones at a place a few blocks away.  Teenagers also went to dance there.  We could stand around the juke box and watch the records spin.  The girls were called “Bobby Soxers” and the boys “Jitterbugs”.
Joey was saying something funny all of the time.  He made everything we did together a lot of fun.  I idolized him.
The name of the place with the dance floor was “Pikes’s Peak”.  Later in life I learned that it was named after a famous early American Landmark.

Starting in the summer between 7th and 8th grade when I was still under 5 feet tall, I would hide in a big bunch of bushes next to the town playground and find tennis balls before the owners came to look for them.
If the balls were brand new we would get another kid to return them. The others we took to streets in the north end of town where usually an older kid, better with a knife than we, would cut the ball in half.  Usually teams of three would then play half ball with broom handles as bats.  I was awful at this game.  The worst pitchers could strike me out every time.
One of the reasons I put up with being the butt of the jokes and the last one chosen was the food which the neighbors would bring out to us on the sidewalks.  Lemonade, iced tea, peanut butter and jelly sandwiches and other tasty treats.  But the finest food of all was Bobby Neely’s mother’s homemade chocolate chip cookies and homemade iced tea with real lemons and fresh mint.  FANTASTIC!

Joan and Beatrice (These Cold Days) 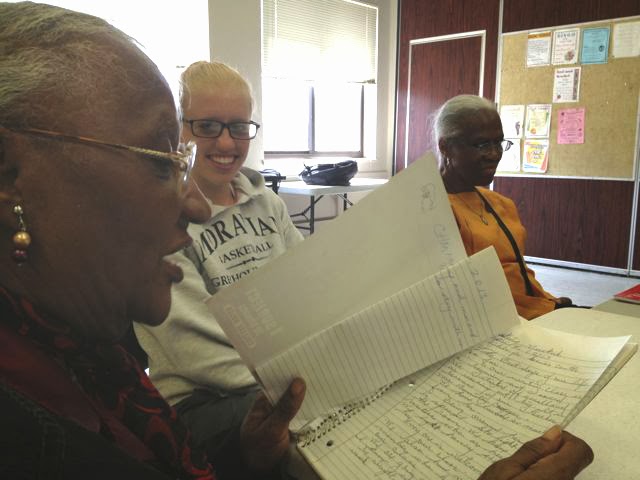 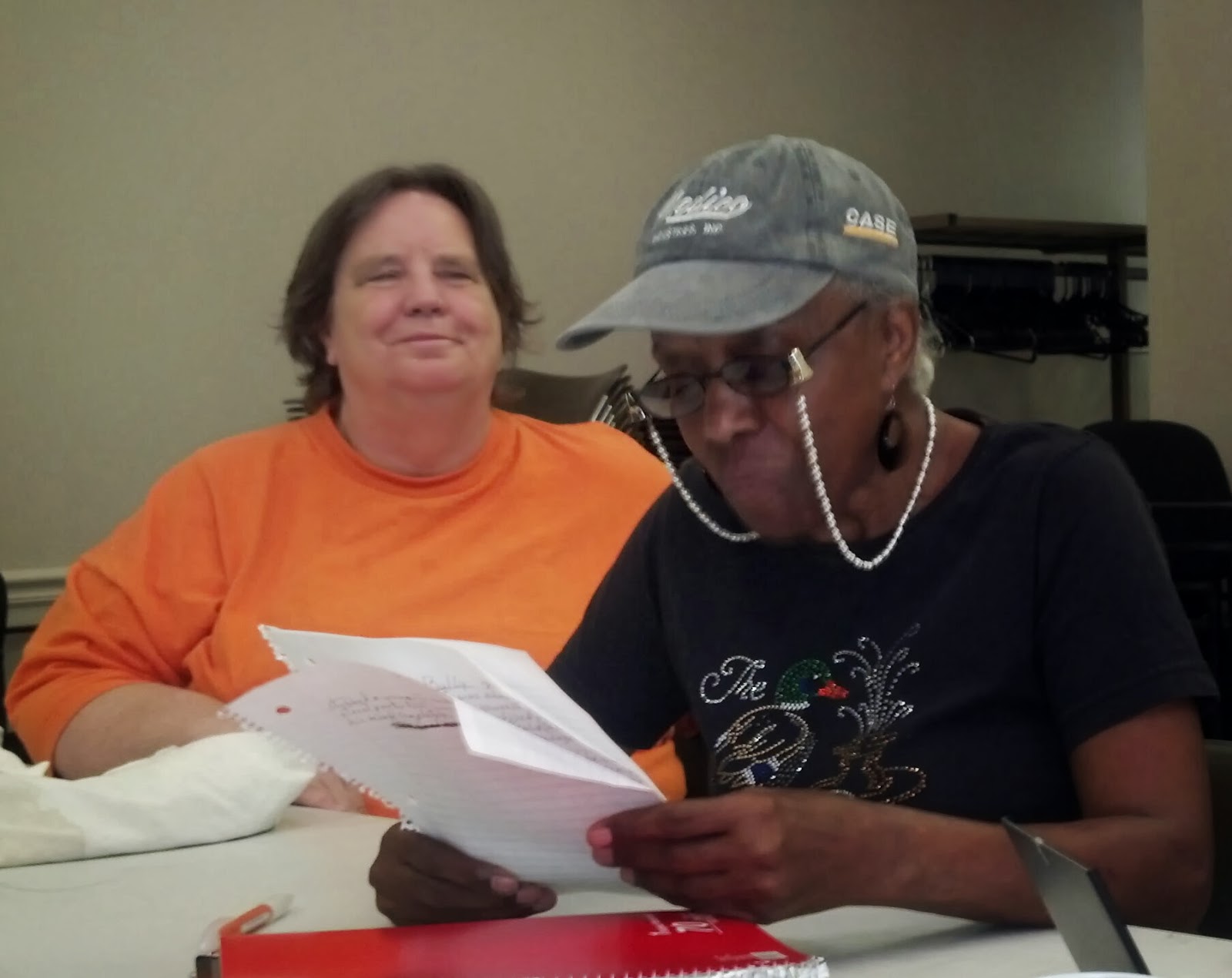 Who says weather is only reserved for small talk? In our seniors’ stories, they open up wonderful worlds with coal men, wood men, and snow angels! Stay bundled... stay warm!

Snow. I love the snow. I get excited when I listen to the weather forecasters announce that there will be snow, but I get kind of disappointed when we get only a small amount. I like watching the snowflakes fall. As I stand at my living room window on the ninth floor there’s always a big smile on my face. Now I know there’s lots of people that dread the weather forecasters prediction of an approaching snowstorm. My heart goes out to those who drive, or have made plans to travel by plane, bus or train because if the storm is bad enough, they’d have to postpone their trip.

Yet I’m still so happy. I picture myself making an angel in the snow, but I’d better not try doing that anymore. If I were to go so far as to lie down in the snow no one would be there to help me up.

These cold days have been very strange - by the temperature being so low when it’s 8 below.  But we seniors know about the cold weather.  Growing up in the 30’s was not a picnic.  We had to make good of everything.  But we made it.  We had to make the fire before we could get warm.  We had to look for the wood men and then the coal men.  Everyone had a pot belly stove.  We always had a cooked meal.  People were very close in the olden days.  Families were very close.  There was always a mom and pop store.  Every corner had a store of some kind.  These days are nothing like we had years ago.