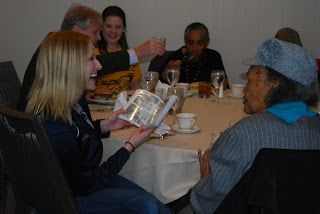 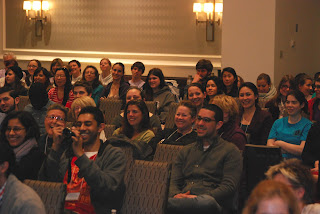 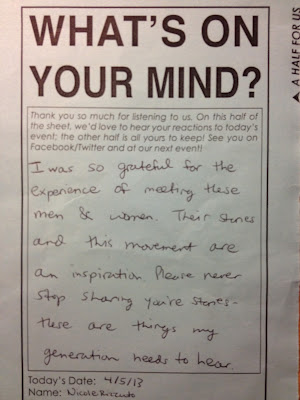 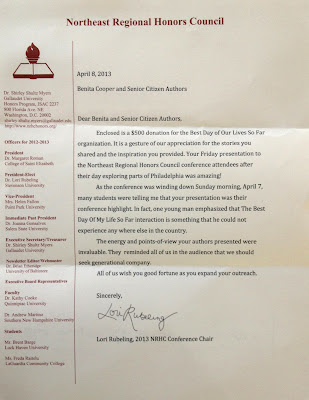 As you all know, Philly has been on our seniors’ minds this month, as inspired by conversations with visiting college students from different cities. Check out photos of our lunch and writing workshop and our formal presentation on Facebook!

Not only did our seniors have a blast telling spontaneous stories about Philly to a conference hall full of young listeners, their memories continued to flow during the weeks to follow –

… about the streets they used to run up and down... “laughing as we attempted to reach our goal near the end, with the sun shining down on our legs”

… about the trolleys they used to ride... “and when you paid the conducters would ring a bell like a cash register”

… about the neighbors they used to know... “we were just like extended family members, we cared”

Can't you all see it? Can't you hear it? Smell it, even? Not just Philadelphia I mean. I mean pieces of our seniors’ childhoods – the everyday pieces that matter – can't you just feel it all coming back to life?

I was born and raised in Philadelphia and things have changed a lot, but the one thing I really miss is the trolley rides.  I had an uncle who used to take me all over the city on trolley rides. I would say I was between four and six, but when my uncle took me on the rides, I noticed little intricacies about the trolleys. I remember they were big, heavy, massive vehicles and when they passed they would vibrate the streets and sidewalk. I remember getting on the trolley, and there were two conductors at each end and when you paid they would ring a bell like a cash register. The seats used to be made of wood, like big wooden benches. Even when I was a teenager, I still had a fascination with trolleys. My friend and I would go on Route 23 and stay on for the whole route just to have something to do. I used to live near a trolley line, and I would feel the vibrations of the train and that’s how you know the trolley was coming. I get that same feeling in the subway or the elevated train, and it’s basically a glorified trolley.

Buses are okay, but they’re not the same. It’s basically a glorified, really big car. It’s not the same as the thrill of riding a trolley car. Throughout the years, the one thing I will miss about Philadelphia is the trolley.

My father was a traveling man and I inherited his love for the road from him. Because I was able to be surrounded by nature’s oceans, country, cities and the jungles of Panama, I know that Philadelphia was just another place on the map of the world . . . or so I thought. I promised myself when I was very young that I would not let my last sunset catch me there . . . or so I thought.

My father worked for the Panama Railroad, therefore he was able to receive free train tickets to major railway hubs like New York or Washington and discount rates to places like New Haven and Richmond. Consequently, my family often took excursions to the forenamed citied on the weekends. Also my sister and I would spend the last week of September on my grandparent’s tobacco and cotton farms in Florence County, SC.

Beginning my junior year in high-school, I worked for three summers at the Joseph and Betty Harlam Camp (a reform Jewish venue) in Kunkletown, PA – the Pocono Mountains.  Between 1961 and 1965 I was a student at Bluefield State College in Bluefield, West Virginia. I was in Philadelphia between September 1964 and July 1965. Thus I was drafted in the Army and served as a Military Policeman and member of my battalion’s basketball team.

I returned to the US in July of 1965. When July of 1966 arrived, it was a special occasion, actually the first time in 25 years that I spent a full year in Philadelphia. It was an adventure to explore the city of my birth but after a while I longed for the road. Therefore, throughout the years I spent three years in Atlanta and seventeen years in Ocean City, MD. My mind was made up to not spend the rest of my life in Philadelphia.

But I’m still here. What does that tell me?

I grew up in what was called “The Tenderloin.” This area was also called just plain 8th and Vine. We had schools, nursery school (The Deaconess Home), churches, hospitals, markets, clothing stores…everything…you name it.

The neighbors were just like extended family members. We looked out for each other. We cared.

Today you may not know your next door neighbor and don’t even care to meet them.

But I still love my hometown.

Is there any section of the city where I feel most at home or belong?

Only fifty or more years ago, yes, yes, my family and I entered West Philadelphia!

Do I have any choice? Of course not!

To add frosting to the cake, we were block busters, having been the fifth Black family out of forty different homes to move here. Nothing new to me, as a former Civil Rights college advocate. At the present Rowan University, formerly Glassboro Teachers’, we were segregated as freshman dorms, but integrated as seniors.

A poster discovered by the Dean saying “Colored Floor – No Whites Allowed” was the catalyst.

This is my first day to be involved in a class that has given me permission to write an assignment about my life. At this point, my mind wanders back to yesterday – the yesterdays when I was funny and energetic. I recall the days I played with my sister and friends in a small street in North Philadelphia. We loved to run up and down the narrow street, laughing as we attempted to reach our goals near the end of the area. I can recall the sun shining down on us as our legs made moments of happiness, taking us to our playful destinations. At some point our family urged us to enter our home and the family affairs that kept us close to each other. I recall lingering over my dinner so I could delay becoming engrossed in homework which was one of the most important events of the evening. My mother and grandfather gave my sister and I attention as we struggled with our multiplication tables and finally placed our eyes on reading our elementary literature.