Alright! To kick off our new tradition of showing our older buds' handwritings with their stories, here's a story that has always meant a lot to me, not just because of what Hattie wrote, but because of what happened right after our writing session was over. I was cleaning up the papers in the quiet room. In walked Hattie. Click HERE to find out what she said. This conversation took place October 15, 2009, just the fourth time of our group has ever met. Already, the sense of trust in our group was inexplicably, magically deep. 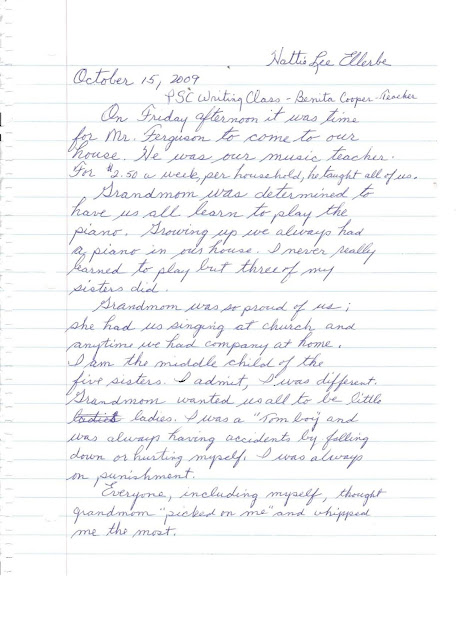 In later years, November 26, 1974 approximately 8pm, Grandmom died in my arms, with a smile on her face as I tearfully whispered - I love you. 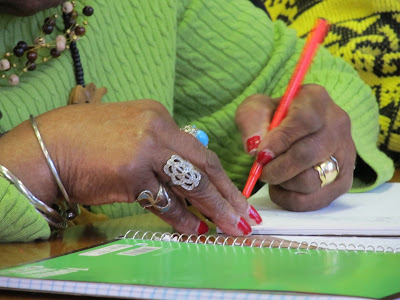 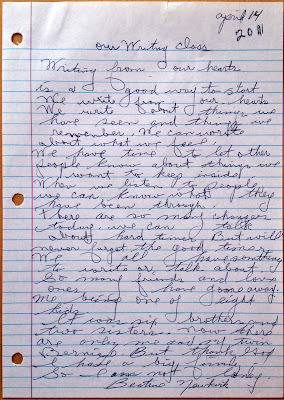 Today, I shared another string of enlightening group texts with our super facilitators of this group. Cassie is a rockstar for starting the convo (Cassie is a very cool girl with a band so it's only an appropriate analogy!!) She said, "I think seeing the actual paper with the older adult's handwriting is something our readers would like to see. Raw and original, you know? Everyone's handwriting says so much about them." So that got me thinking, maybe I will go back through our boxes of original handwritings that we have protected for years like gold, and start posting some here. Scanned version. Typed version. Side by side. I am pretty excited about this. I hope you are too. 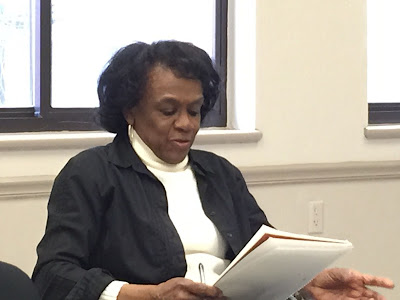 Have you ever felt like sometimes you stumble across a story and it’s the exact thing you need to hear? Frances’ story is advice that I am filing under “best advice I have ever heard.” I need this story in my back pocket, so I can come back to it over and over again. Figure out which part of your life needs changing. Make a decision to get on the right course. Go for it. I love that. Next time that feeling for change hits me in my gut, you know what story I will be rereading. Thanks, Frances!

My daughter and I had a conversation recently about her career path that has gotten altered. She is now working in a company that she does not like, after being there for the last year. I reminded her that unless she actually pursues another path, the conversation could be repeated at this time a year from now. She agreed.

Often we follow a path that does not lead to the change we desire and let the clock keep ticking, keeps us in the same place. We decide which course our lives will take either by doing something or not.  Course of action is being taken.