Tip #2 Honor the older adult’s version of the truth. 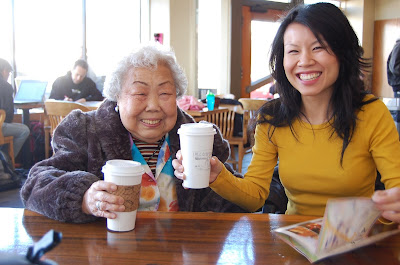 Today’s Tip:
Try not to worry if parts of the older adult’s life are missing between stories. What he or she has chosen to tell you are the episodes of the life that matter to him or her, the moments that contain his or her emotions, values and dreams. Whether they are exaggerated on purpose or by accident, they are the older adult’s version of the truth, which is more real than fact itself.

The Moment that Inspired This Tip:
At the end of my second ever call with my grandma, I distinctly remember her saying this to me in Chinese: “A lot to tell. A lot happened. As I start to think back, one thing blends into another, probably hard for you to understand, right? But you are patient. You ask me. You are very thoughtful. You want to know. This kind of deep, deep memory doesn’t usually come up when you are just talking about daily routines.”

At that point, I was already in love with her stories but I didn’t understand how to listen the right way. For the first couple weeks of our conversations, I felt this impulse or obligation to play family historian, to uncover every fact in her past. I would get so mad at myself for not being able to bullet point all the things that happened in her life and fit them neatly into a timeline. Then something shifted. I began listening with my heart, not my mind. After getting off the phone one night, I had an epiphany. I realized my grandma’s voice is more precious than any fact in any history book. I finally understood what it meant to be a granddaughter. That was when our friendship I think really began.

My grandma had bound feet – did you know? She also lived in Guang Zhou in the same house with Old Li and me. Oh no, not my real grandma. My real grandma, I didn’t meet until I went back to the village and by then she was very old. When I was young, I didn’t know her; when I went back, she was already blind, so she never knew me. Gou Ma visited her and brought her food, and brought me along. Gou Ma was already sixty herself when she took me back from Old Li, and living by herself by that point. I never met her hushand, who had passed away by then.

And so, to be clear, the one I call “Grandma” was actually Old Li’s late husband’s mom. I can see how that could sound a little confusing, and am glad you asked! She and I spent many hours together in the house, most of which I spent watching her feet.

Sad for me – no school to go to and stuck inside. I wanted so badly to go to school.

Old Li was out a lot, and her mom was a nurse, or training to be a nurse, so she was out of the house too.

Grandma wouldn’t let anyone see her bare feet, so I had to use my imagination. It was pitiful, painful to imagine. Her four small toes were bent backwards under her feet. Her big toe was really the only shape in her cloth shoe you can see. She wore these shoes that had holes just for the big toes. I don’t know how she took a bath. I don’t know. Maybe she didn’t wash her body? But what I could observe was that she tipped her weight to the front of her feet when she walked.

Traditionally, the ladies had bound feet; poorer people had normal feet. But it was just going out of fashion by my time. Good thing!

I will show you a photo of my grandma next time you visit. I will find it. Back then, there weren’t many photos taken, so ones showing bound feet are very rare. It is they kind of picture they make many copies of and sell in Chinese arts and crafts shops – Americans like to buy pictures like that to decorate their houses. They must think the way Chinese people dressed is cute or special.

You know, rumor had it that Grandma was the first woman with bound feet who came to America. But how she hated it here! Because Americans wouldn’t stop gawking at her. She got here all the way by boat and rode all the way home by boat. The rides must have been unbearable, so the ridicule must have been even worse.

Grandma’s feet are really the main thing I remember about her. And I remember he singing. She sang to herself, staring into a book. You can listen if you want but it was intended for herself. Besides that, she spent her time reading the paper, listening to the radio (which had been invented by then and was pretty popular), and sang along to Chinese opera songs.

The Li family had a live-in maid. They had enough money. So Grandma just sat at home. And I was told to just sit at home. With no books to read. They said to me, “Girls go to school for what? You tell me?! Not like you will make money any way.” That is what Old Li said to me. I was very mad at for saying that but what could I do?

Meanwhile, Grandma would try to convince me to be a Chinese opera singer so she could go to shows for free. But I didn’t want to. I couldn’t tell if she was just trying to be funny, because she mentioned the idea often. If so, I didn’t think it was funny. I didn’t even like Chinese opera. I just couldn’t get into it.

What I loved was movies because they are about real life. In Chinese opera, you wave a flag around which symbolizes this or that, but it is not true. I didn’t understand. And besides, I was too short. I couldn’t see past people’s heads. They built low temporary scaffolds out of bamboo and threw wood planks across them. That was it – simple way of making many rows of benches, wasn’t it? The problem for me was that they were all the same height.

When I was twelve, Gou Ma brought me back to the village, where I finally got my wish – to go to school! Can you imagine my happiness? The sad part was, it did not even last a whole year. The teacher was old, and taught all the same classes in the same room. She tried to teach everything, but really only knew a little of everything. Now one good thing was, after I got out of classes in the afternoon, I sometimes went with other girls to the movies. Not too many times, but every time the movies gave me a mixture of real feelings, and I liked that.

Years later, when the Japanese came to fight in Hong Kong during the war, I went to movies a lot. There was nothing to do during wartime. And because of the war, movies got very cheap, only five cents. Your grandpa had a steady income so we had enough to eat and a little extra to spend. You ask why I had this kind of  freedom during the war, why I didn’t have to hide? You see, the Japanese kids were dropping bombs, yes, but just once in a while. You were as safe in the movie theater as you would be at home. We were ok, so why sit at home and be scared? You need entertainment to have a meaningful life. And for me, movies were very exhilarating. Of course, when peacetime came, life was easier in a sense. At that point the family grew, and sometimes we brought all the kids to the movies including you mom when she was little.

A lot to tell. A lot happened. As I start to think back, one thing blends into another, probably hard for you to understand, right? But you are patient. You ask me. You are very thoughtful. You want to know. This kind of deep, deep memory doesn’t usually come up when you are just talking about daily routines.
Newer Post Older Post Home