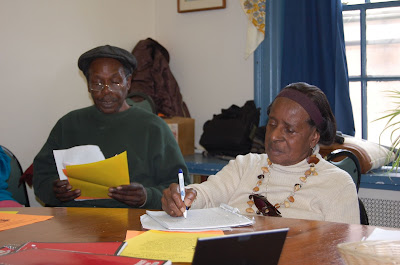 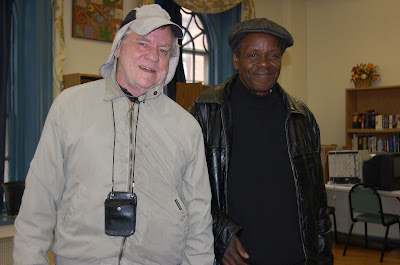 Ready? Then here we go! Flash back to 2010 to our first teen visits, and yup, this was when our class was still starting out and was camping out in the basement office of a senior center staffmember...

I was initially attracted to the senior center because of its computer lab, which is located in its basement.  I would literally spend hour upon hour in the lab pursuing my passion: writing stories.  Eventually I began to notice that a group called “The Best Day of My Life So Far”, a story telling and writing group that met weekly in the conference room at the end of the hall once a week.  Because I had been engaged in writing stories, one would assume that I would have jumped at the opportunity to join the group; however, that was not the case, for I allowed prejudgment to sway me.  I had become leery of young people.

I clandestinely investigated the group 3 times by peeping through the window in the door.  I saw, not only seniors but young people as well.  They were actually running the group.  Odd.  They seemed to be in their late teens and early twenties.  I assume that the young folk were college students fulfilling a course requirement.  Experience with such groups (juvenile incarceration, Philadelphia Senior Center) generally found me becoming alarmed at the “greater than thou” attitude that many of the interns exhibited.

One day in the computer lab, a gentleman, Ted, told me that in light of my writing interest I should join the group.  He definitely thought it would be worthwhile for me to do so.  He also spoke of a storytelling presentation at the main branch library.  I had no idea that the presentation in question was also hosted by “The Best  Day of My Life So Far”.  Several months went by and in the winter there was a well advertised campaign for a week long storytelling festival at approximately ten venues in Phila.  Maybe there was something to this storytelling stuff.  My interest heightened, but there was one more incident involving a young person that I would not allow deter from my prejudgmental path:  A young lady, a fine poet who stated that it was irrelevant for black poets to write about the black experience.  Young people.

Finally I went to visit the “The Best Day of My Life So Far”.  During my first session with the group, I was immediately in a comfort zone and found the founder, Benita Cooper, although young, a wise leader.  She is mature, showed compassion, organization capabilities and dedication.  I could feel the camaraderie that encased the room and delighted in the stories being told by a multi-racial group.  And it was then that old adage “Don’t judge a book by its cover” struck me in my brain.  Thinking that prejudgment could have prevented me from not being a part of “The Best Day of My Life So Far” I have assumed myself to always give multiple looks to that which I may have questions.

I have been a part of the group for several months and have recently visited the website, a well organized endeavor that has enlightened my on the various aspects of the writing group.  Through the website, I have been made to realize that the “The Best Day of My Life So Far” is a multi-generational group.  I am eagerly looking forward to meeting its younger participants when they visit again.  They will help me to not prejudge.