One of the good things about Best Day is that it takes place on a weekday: perfect for retirees looking for activities to fill up their formerly full nine-to-five slots. The downside is that many people who would otherwise be interested in volunteering can’t take the time off to do so. I'm lucky enough to be able to have a job that allows me to facilitate on Thursdays, but as a 27-year-old that makes me an anomaly. On the plus side, there is one group who is always ready, willing, and able to volunteer on the weekdays: college kids. College kids tend to have flexible class schedules to begin with, and many of them are already looking for volunteering opportunities. Many of my fellow facilitators came to Best Day during their college years themselves. 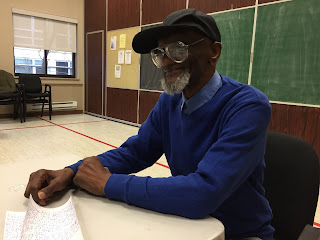 A special thank you goes out to La Salle University, who hosted a lunch and writing workshop based on the history of Philadelphia. Our older buds got to lunch with loads of La Salle's history and anthropology majors, as well as several undeclared but not unenthusiastic undergrads. Afterwards, they shared their favorite stories about their life in Philadelphia, the Philadelphia outside the textbooks and Wikipedia articles. It was one of my proudest moments at Best Day, and I've wanted to do another workshop like that ever since. You can read more about our workshop at La Salle here and here.

And yet another shout out goes to Temple University, since I heard they will be sending us interested college students themselves. One of them, by the name of Stephanie, is an intern at the Philadelphia Senior Center. Last week she sat in on one of our sessions so she could tell interested college students what we were all about. It looked like she really enjoyed herself, and the older buds loved her too. Eugene and I both took Senior Selfies last week, but Stephanie opted out. Perhaps another week... 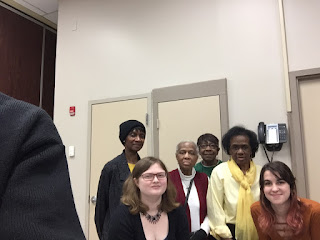 So without further ado, please enjoy this collection of college-themed stories!

I had been out of high school for a few years, and the idea of going back to a classroom was a little intimidating. I was a little nervous but I thought maybe I’ll give it a try.

I prepared myself for the first day. It was a new experience because I was the only sightless person. On the first day, I walked in and introduced myself. People asked, “How is he going to keep up? Take notes? Survive in the class?” One particular fellow who was sitting next to me had a really surly attitude. He said, “Do you expect us to take care of you? To help you, write your notes?” I said to him, “I never asked you to help me. I can hold my own and keep up.” Another lady was the opposite of this man. We became friends. She helped me out, took some notes and we were friends outside of class.

People always pre-judge. All that man could see was that I was sightless and he judged me. I maintained an “A” average in my classes. I had my text books on tape. I hated Algebra though I took other math classes, but Algebra was the worst.

I found my way around the school. I knew where to go on campus. I took the bus and sometimes my friend would drive me home. I loved my music history class. I thoroughly enjoyed it. We learned about music from the medieval period to rock and roll! I imparted some of my knowledge to the instructor! She gave me an A+!

I enjoyed my experience at Philadelphia Community College.

When I arrived on the campus of Bluefield State College, a small Historical Black College and University, located in the city of Bluefield, West Virginia during the semester break in January 1961, I was highly disappointed for several reasons. First, I expected a larger campus, certainly nowhere as large as Temple, Penn or Drexel; but nevertheless, a campus more vast, a campus with more buildings. Secondly, I expected to see students dressed in the ivy league mode (loafers, recreational bucks, newsboys hats, khakis, rain coats, button down shirts) opposed to fashionable party wear. Truth be told, I was equating my initial impression of the campus with what I had seen of the large Philadelphia campuses.

As I stated earlier, I arrived on campus during the semester break. There were no females present. There were around 30 males, some of whom where Korean era veterans. As the only true freshman on campus, I was subjected to light silly hazing, a custom on campuses during the period, which I found to be entertaining, until the students who had spent semester break off-campus returned. For me, freshmen hazing was over.  I let the upper-classmen know that fact. They reluctantly left me alone. There was no way that I was going to be embarrassed in front of those lovely coeds whose presence had me forget about what I thought the short comings of the campus were. My college life had begun. Four years of study, dances, love affairs, pranks, highs, lows, camaraderie, dormitory life, civil rights demonstrations.

During my first semester, I did well in my history class, I struggled with remedial English, a class taught by a young professor who took me under her wing. Once, after reading my essay that I had written, she informed the class that while I needed to gain a mastery of grammar, I, nonetheless, had an idea about the nuances of creative writing. I was surprised when I received my first college transcript. While I thought I was going to be placed on academic probation, I received a grade point average of 2.17. I was elated. I felt that, perhaps, I could manage to navigate my way through college. During the second semester of my freshman year, I again, did well in history and received an “A” in sociology, English Literature, and Public Speaking, a class in which, I was amongst a few who were selevted to participate in a workshop designed for those that showed an aptitude for oration.

In order to increase my grade point average, I enrolled in a summer accelerated constitution class at Cheyney State College in Cheyney Pennsylvania (which had turned me down for admission) and received an “A”. By the time I was a second semester sophomore, my grade point average was 2.38. That average allowed me to become eligible to pledge for the Omega Psi Phi Fraternity. I became president of the pledge club and secretary and Dean of pledges for the fraternity. I was always the master of ceremonies when the fraternity held academic functions. During my senior year I became vice president of the inter-fraternal counsel.

In addition to having become a visible fraternity leader, I also became a civil rights organizer and president and founder of the poetry society. In my senior year, I received an “A” in Advanced English Grammar. I accomplished this feat without purchasing the text. Evidently, I had come a long way from being chronically shy, learning disabled, and low self-esteemed individual.

I can truly say that my sophomore year in college was the year that convinced me that I could overcome all obstacles if I persevered, believed in myself and worked hard. I realized that I was not stupid. I began to verbalize. I began to assume campus leadership positions. Attending a HBCU, which in the early sixties were institutions where the students’ administrators and faculty were close knit – like an extended family, was a plus. Some instructors realized that I was not equipped for college study, but because they saw that I was trying heard, they helped me. They would have me do chores for them: rake leaves, shovel snow, paint, clean house, run errands, etc. After completing shores, they would give me a meal, private tutoring for several hours and pay.

On the two occasions when I was unable to pay for boarding, the administration did not send me a bill. When a local graduate sorority chapter, one whose members were overwhelmingly, alumnus of Bluefield State College, found out that I was financially strapped, they gave me a stipend. When I did not have $25.00 to purchase my teaching certificate, a group of female students made sure that I had the money I needed. My four year tenure at Bluefield State College taught me an important lesson: if one desired something badly enough, perseverance would deliver it. I spent four wonderful years there. My last night on the campus a Bluefield State College was a spontaneous time of ritualizing for a few of the students that had completed the summer session. I remember how on that pleasantly warm mid-August evening we gathered in front of the girls dormitory and commenced to sing all of our colleges fight songs, the school’s hymn, as well as an array of the sorority and fraternity songs.

I felt like a physical sensation in the form of stupendous school spirit had engulfed me. Exhausted, we spent several hours conversing. I spoke and heard about the past incidents that happened on the campus. I wanted to stay in the group forever. I do not know how long we were engaged in this ritual or when I retired to the men’s dormitory for the last time. I could not sleep. I thought about what had transpired in my life during the last four years that I matriculated at the college and what the future held for me.

I recalled how I had entered the college as an unprepared freshman but had blossomed into a campus leader – a big fish in a small pond if you will. I thought of how my becoming the founder and president of the poetry society, secretary and designated master of ceremonies of my fraternity, vice president of the inter fraternal council, speech writer for the eventual schools student body president and civil rights designated chaplain and leader could not have been accomplished without the support of the administration, faculty, and student body. I was especially grateful for those faculty members who saw that I was trying and unselfishly extended themselves towards me. I thought about what the future had in store for me. Would I be drafted? Would I be able to get into grad school? Should I go to the Deep South and become a full time civil rights activist? Should I seek employment? The morning after the last night on campus, I moved into the future and never forgot my time as a mountaineer. In August 1964, I completed the requirements for Bachelors in Education. I majored in Social Studies and minored in English. While I entered Bluefield State as a student who was unprepared for the rigors of collegiate work: I nonetheless completed my course requirements a semester a head of time. 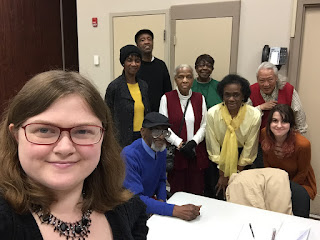