The Year of W.E.B. duBois (Norman)

This past Tuesday, I gave older bud Norman a call asking for details on a future blog post. When he picked up, he apologized for missing the last and current week of Best Day...because he was working on a symposium devoted to W. E. B. Du Bois! For those of you who don't know, W. E. B. Du Bois was a sociologist, historian and civil rights activist during the early 20th Century. He's know for having popularized Frederick Douglass' phrase "the color line," co-founding the NAACP, and writing lots of books and studies on the Black populations of America. One of his books, The Philadelphia Negro: Past and Present, is the focus of the symposium Norman will be attending. I mention this not just because of Norman's involvement, but because the Philadelphia Senior Center is based in South Philadelphia. Many Southern Philadelphians, including members of the PSC, had grandparents who lived during W. E. B. du Bois' study of Philadelphia. So they'll be going to this symposium to share their grandparents stories as well! Also, Philadelphia will be hosting events in honor of W. E. B. Du Bois for the entirety of 2018. Click here for more information.

Norman, we'll miss you, but we know you'll have lots of amazing stories when you come back. In the meantime, here's an absolutely incredible story Norman wrote back in January. Brittanie Sterner from the Free Library of Philadelphia will recognize this one! 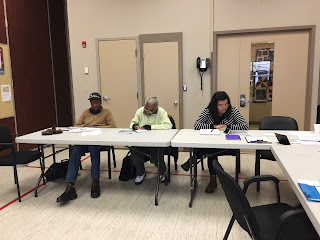 One pleasant afternoon in the Spring of 1953, when I was 11 years old, my crew and I at the suspension of this guy Benny, decided to leave our neighborhood and walk ten blocks to “Father Devine’s Mission” to play basketball in the mission’s gym. The idea was not a good one for two reasons: (1) we had to go through several hostile neighborhoods; (2) The guys Bunny (who was 2 or 3 years older than us) behaved as if he was our boss. He should have been associated with guys in his age group, he was always leading us into detrimental situations.
After walking, long, long blocks, we reached our destination without incident. However, the gym was closed. On our way back to our neighborhood, we had to cross an overpass above a railroad yard. On the edge of the overpass were several crates of 1-qt milk bottles – all glass. Remember, this story took place in 1953, years before the advent of plastic containers designed to hold liquids. The guy, Bunny, who like I said was years older than our crew and who was the one that subjected our journey – began to pasture.
He just had to demonstrate his mistaken intelligence. He began to count the bottles. Before he finished, we saw a police car turn the corner. Although we had done nothing wrong, we ran. Being a slow runner, I was at the end of the back. After we had run ¾ or less of a block, all of the guys, except me, jumped under a car. I kept running, only to be picked up by the police and placed in the car with the other 4 members of our crew. It was an adventure gone awry. When the policemen asked Bunny why he was counting the milk bottles, he replied, “You know how boys are.” I think Bunny had been influenced by the television sitcom, “Father Knows Best” and the characters and situations found in Archie comic books.
We did not ask what we had done to be in police custody. We silently huddled in the back seat of the police van wondering what the outcome of our adventure would be. We realized that we were en route to the 39th district police station at 39th and Lancaster Avenue.
When the police car passed Lancaster Avenue and Aspen Street, which was within the boundaries of our neighborhood, we tried to shrink – make ourselves invisible, we did not want to be seen by those who knew us; we would have never been able to eliminate the stigma of being in the custody of the police

When we reached the 39th district, we were placed in a cell. We still did not know what crime we had committed. Incidentally, we had been jokingly placed by a group of good humored police in the exact cell a year earlier during an open house event which commemorated the opening of a new 39th district police precinct. This was different; however, we did not panic, actually we were in a jovial state. Within 15 minutes, one of the arresting officers came to our cell and asked us who was turning on the fire ply in our neighborhood? We told him we didn’t know. Why tell on yourself? Especially when you are in a jail cell. The officer said we were taken to jail because we had been suspected of throwing stones and milk bottles at the trains from the overpass from which the officers first spotted us. We were allowed to go. When we got back to our neighborhood, we vowed to never tell of our scary adventure. 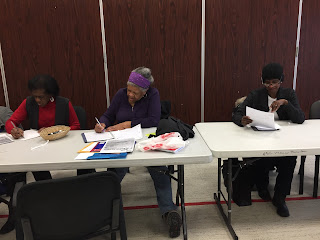 P.S. We did take a senior selfie this week, but one someone else's camera. I haven't gotten the picture yet, but I should have it by next week!