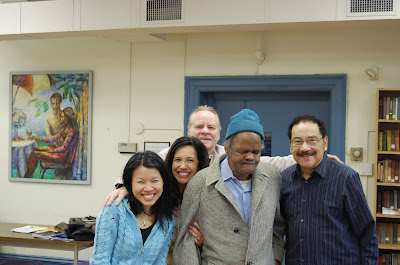 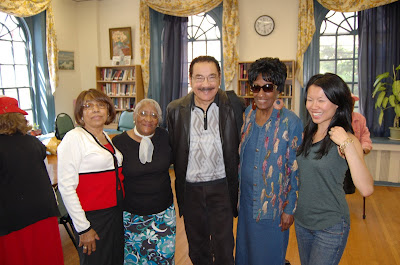 And now, a shoutout to our very own Luis as he is en route to Houston to compete in the racquetball division of the Senior Olympics! Luis, we are all here cheering for you - your own digital cheering squad! Well, that’s a story that is waiting to unfold and be told when Luis gets back in town.

Until then, how about a little something (or, more like a majestic something!) that shows another facet of his colorful life... let's just say it's "a love story" with a twist. But wait, there’s another twist: see the responding email that our super copyediting coordinator Tanya sent me after she read Luis’ story! I couldn't wait to pop the email open when I saw her subject line: “Something Fun for Luis”.

And, she’s been waiting a long time, too long.  Her make-up has started to run, wrinkles have started to replace a once smooth skin.  A lady that had been described as having a majestic beauty that drew everyone’s attention, now appeared gaunt and alone.

Her appearance, which she always took pride, had now been totally neglected.  As I stood there, having difficulty looking at her, my thoughts went back to the day when we first met.

We were both very young.  She a maiden, I, just a boy.  But it was love at first sight.

She was beautiful, well stack, and just looking good, like any lady should.  I boarded her several times that day, until it was final time to say goodbye, and go my way.

I can still hear and see the imaginary sounds and sights of fireworks, bells and whistles, and fog horns in the night,  . . . . or were they?

Knowing I would never see her again, I turned for the last time, but she was gone.  And now, after all these years, I stand here looking at her, all tattered and torn.

What happened, where did she go?  What was her name, what did she do?

My questions were answered when she left me that day in 1952.

All stacked in red, white and blue, little did I know she would go full steam ahead and make her maiden voyage true.

She was built for pleasure and speed.  Her beauty and performance became stuff that was hard to believe.  Her name, the SS United States.  The largest and fastest ocean liner ever built.

Little did I know, when I boarded her in “52”, that her 17 year journey would include, “holding the record for the fastest crossing of the Atlantic, designed to serve as both luxury passenger ocean liner from New York to ports in Europe, and as a transport to host U.S. military troops”, until her forced retirement in 1969.

After year in dry dock and not knowing what to do, she was moved to the Delaware River in South Philadelphia and docked at her new resting place at pier 82.

Yes, Her wait has been long, her patience virtuous.  Still well stacked, her condition fuctional.  And now, at age 59, the stately lady is seeking a new suitor and new ground, that is, if one can be found.

Tarnished by decades of neglect, now comes forth a passionate commitment by a granddaughter named Susan and the help of a gentleman, they call “Gerry”, to restore this “damsel in distress” to the majestic beauty I once knew, when I last boarded her that day, . . . that day, when she left me in 1952.

This time things will be different when I board her again, not to deliver tokens of warm wishes and good cheer, bon voyage gifts as it was in “52”, but to set sail with her anew.

While renovating our house many years ago, we found tons of old papers under the many layers of linoleum.  We had to look through them all – they were fascinating!  We took photos of some articles/advertisements we thought were interesting.   Here’s one of them: 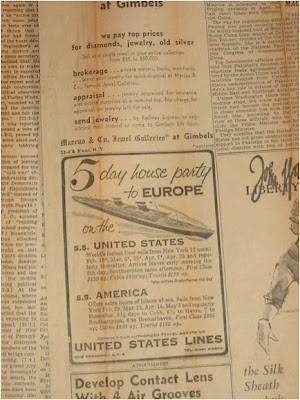