The other day, I went through my phone and noticed some old screenshots I took of some Best Day stories from our Dropbox. I’m the kind of person who loves to take lots of pictures; I have 3,000 from a ten day trip to Japan! I knew I took screenshots for a reason, but I took them so long ago that I actually forgot the reason. Even at home, my computer is filled with folders called “Why Do I Have All these Pictures of Tarzan” or “Why Do I Have So Many Pictures of the Rival Band from Jem and the Holograms?”

Here’s the first story I re-discovered:

Way, way back before there was MySpace, Facebook, Twitter, Instagram or Snapchat, there was “The Slang Book.” Yes, the Slang Book was social media of its time. In the impoverished North Philadelphia, largely African American neighborhood where I grew up, it was the sine qua non of socialization for predominantly female teenagers of junior high school age. But some boys and high school students also indulged in slang books. Unlike the private nature of diaries and journals, the slang book allowed participants to share their opinion on current information related to such topics as entertainment and romance. Some subjects considered taboo by adults – related only to what teenagers felt were relevant.
All a team needed to create a slang book were a notebook, a pen, and lots of imagination. On the first page, the book’s creator identified herself and the book’s name; e.g., “Slang Book” by “So and So.” The next two facing pages consisted of a sign-in sheet. On it teens entered personal identifying information about themselves, just as is required of most online social media websites. This information included name, address, code, phone #, and age. (Hardly anyone worried about privacy in those days.) The code was analogous to today’s “username” or online name. The remaining pages were filled with questions to be answered by the participants.
As it happens, I recently discovered an old slang book that I created in 1957. I intend to scan each of its pages for my grandchildren to read, especially for my granddaughter, who is now 15 – the same age I was when I created the slang book.
Some of the most intriguing question and responses in the slang book of yesterday.
Ruth will now read some of the most intriguing questions and responses in the slang book.

Interestingly enough, there wasn’t a Ruth in Best Day that day, so we never got those questions and answers. Also, Googling “The Slang Book” just leads to books about slang. Dolores passed away in 2018, and I never knew what came of her slang books. Interestingly enough, Frances’ story is about losing an entirely different type of book.

I fondly remember reading comic books in my childhood. Dick Tracey was one of my favorite. He had a girlfriend Tess who later became his wife. They had an adopted son Junior Tracey and later a daughter Bonnie Braid who was born in the back of the squad car in 1951.
Dick Tracey used his two way wrist watch to communicate with his partner Sam Catcher. Now, we have an iWatch, which shows that long before Apple invented the iWatch, Chester who wrote the story, had the technology in mind. I have been reminded that most things are not new, but are improved on things before.
Who can forget B.O. Plenty and his wife Gravel Gertie, who gave birth to a beautiful daughter – Sparkle Plenty. Now, comic books are priceless from the early editions. I think of all the treasures that my mom trashed after telling me and my siblings to pick up our comic books or they would be gone if she had to pick them up, if only we knew the value of all the comic books that we owned and had no sense of how valuable they would be later.
Today, I still enjoy some of the daily comic strips printed daily in the newspaper, but they do not evoke the memories of Dick Tracey, or Archie, Betty, Veronica and Judd Head! 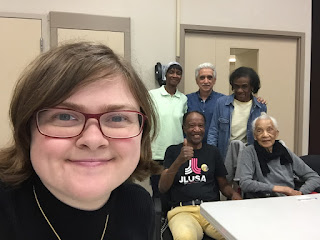 If you or an older bud come across some cool stories while cleaning and tidying up, share them through http://bitly.com/shareastorytoday
I've found plenty of hidden gems myself throughout the year. One about targets, one about guns, one about potatoes, and one about the Rocky Horror Picture Show.Or if you'd like to contribute to our 10th Anniversary celebration, then donate athttp://bestdayofmylifesofar.org/donate/
Curated by Caitlin Cieri
Newer Post Older Post Home