We went to Drexel’s Dornsife Center again last week for another storytelling workshop. But before we did that, I bumped into older bud Eugene. He’s moved from storytelling to photography, and he brought over a photo he took of one pf our workshops. 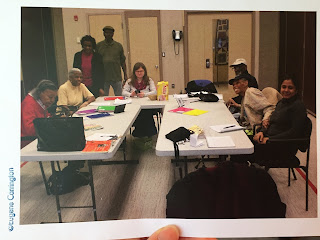 And I also confirmed that he headed the Harlem Atheist Association in the 90’s. I saw that he did in this one book, but I wanted to make sure. 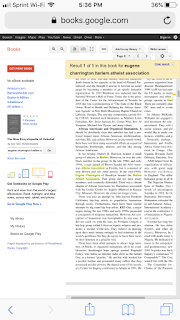 I always get warm fuzzies when the older buds are cited in other books!

Makoto couldn’t make it last’s week Dornsife workshop, but Tenara ran it like a pro. We split up into groups of three again and got to hear everyone’s stories from last week. It ran the gamut from getting lost in Japan, assumed infertility, proposals, a dancing thief, trash-talking your own reflection, and getting a part in a movie. And not only did I convince a few more people to come to this week’s session, but Joyce brought a framed picture she took with the Obamas. 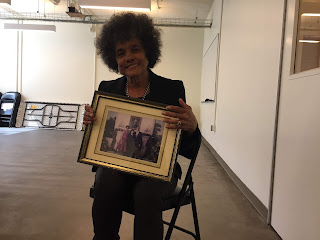 We're back at the Philadelphia Senior Center this week, but this won't be the last we'll see of Makoto or Tenara. We'll be seeing Makoto's show with The Sincerity Project on Saturday, June 8th at 2PM. Also, Tenara herself is interested in a collaboration with Best Day as well. And no wonder, with incredible stories like these:

Last Thursday and Friday, I spent with my oldest daughter, Rose. I was very excited because her daughter and her four children would be there. They’re from Johnstown, Pennsylvania. I have lots of other great-grandchildren but feel closer to these because before they moved to Johnstown and when they were younger, I used to have to take them to school and the youngest one to daycare and then pick them up. At that time, there was only three of them. I had to iron the clothes they had to wear for school the next day and make sure they were presentable at school.
I enjoy doing it and am glad I was available. My daughter worked and was not able to be there for them and of course, the children’s mother worked also.
My [favorite] television show that I watched with them was “Spongebob Squarepants.”
They have a little brother now. his name is Jcea. He’s not quite two yet and very sweet.
My granddaughter Tauheeda will be soon moving back to Philadelphia, sorry, I mean Chester, PA. At least they’ll be living closer.
I never heard of Johnstown until Tauheeda moved there. It takes about five hours from there to Philadelphia.
I also enjoyed visiting them while in Johnstown, and I know I’ll also enjoy visiting them in Chester.
The only thing I’ll miss now is the long ride from Philly to Chester. It’ll be long enough, but not as long.

I started to go down the front stairs when I emerged from the bathroom and noticed that the back room door was now closed. Since the whole neighborhood was changing, several of my brother’s friends, my play brothers, stayed with us during the school days. The guys stayed five days and went home on the weekend. The boys had the largest room in the house – two big beds and two fold-up couches. Their room was near the back stairs that lead to the kitchen. So if the door was open, I would sit on top of the back stairs and converse with them. If it was just my brothers, I would sit on top of the dresser that was inside the room and talk with them while then shined their shoes and ironed their pants and shirts.
My mother always said an eavesdropper never hears anything good.
When I noticed that the door was closed, I did something that I never did before. I overheard one of my play brothers speak about one particular lady. It wasn’t what he said, but it was how he said it. When I emerged into the kitchen, my mom and her friends were at the kitchen table and they all said, “You look flush.”
I couldn’t tell my mom why. Lesson well learned.

Well when it first got cold, I turned the heat on. It was nice and toasty warm. I turned the heat off the next morning and went about doing my household chores, took a short walk, ate and finally got ready for bed. I turned the heater on and around 4 am turned it off because I was too warm. When I got up yesterday (the 16th) the heater would not come on. I called the Gas Company’s Parts and Labor Program and was given an October 24th appointment. Hopefully they can repair the problem. In the meantime, I have either a burner on to give the house hat in the daytime and the oven on low all night. I really don’t want to see this incoming gas bill!
But I have to pay for the heat or freeze, maybe freeze isn’t right but be cold and achy because of the arthritis. In addition to the cold and coming gas bill I’m worried that I will have to buy a new heater. I’m telling myself that it’s probably time because the heater is forty-two years old and I’m thanking the Lord that it’s lasted this long and if I have to get a new, I’m sure he will make a way for me to do so because being cold – putting on layers of extra clothes that must be removed for bathroom purposes really ain’t funny.

After a trip to the “Light and Sound Theater” in Lancaster, Pennsylvania, I will always remember this experience. With a huge cast of professional actors and actresses and a never-ending backdrop of exquisite scenery, this was entertainment at its best.
Some of the 30 fellow travelers on the bus were happy to speak about this Pennsylvania Dutch country. However, I still have a few unanswered questions. Following the show, we stopped at the “Good and Plenty” restaurant. This family style eatery seated our group at a long table where we helped ourselves from large bowls and platters of delicious dinner foods.
Oddly enough, the “Shoo Fly Pie” was untouched! Why? Well, I alone tasted a small slice! Can you help me? What is the history of Shoo Fly Pie?? Why was it shunned?

My mother saved her extra money she made doing domestic work, which included washing and ironing for families. She put her stash under the linoleum rug in the living room. This money was used to buy us Easter outfits and back to school clothes that we had previously outgrown the past year.
Our small town had few places to purchase quality clothes and lots of shops. This was the shopping center that our small town visited.
My mom and two of her friends tried a taxi to take them to the shopping trip when the cab arrived she grabbed her bag and went into the living room to get her money. She raised the gray incision to get the money. She didn’t see her money. She looked to see if the money had stuck to the underside, nothing was there. Her face showed the shock and disappointment that was impossible to forget, the money was gone.
She went out to tell the driver and her friend that she would not be going that day. Money she had earned during domestic work and laundry for families was stolen and she knew who had done this terrible deed.

In my youth, I was a team sport fanatic: football, baseball, track, tennis, golf, and especially basketball consumed much of my time as well as the time of my friends.
We would play sports from early dawn to beyond dusk, on streets, playgrounds, and parks.
Some of us were good enough and fortunate enough to be members of junior and varsity Junior High and especially High School teams, which was quite a feat because there were only 16 public high schools and fewer middle schools during the 50’s and 60’s. Today, there are at least 65 to 70 or more charter High Schools that held league competitions. In most cases, varsity High School athletes participated in these leagues.
While I did not make my High School basketball team , I played on a YMCA basketball team that consisted of members of Junior High School Penn Relay 440 championship and two outstanding football players. One was an all-Delaware Valley first team and the other a member of the Baltimore Colts. Often times we played against teams that were actual complete High School teams of merit.
During the 50’s and 60’s, the cost to see professional and college athletic events were not as astronomical as they are now. Things are different today.
Schools in Philadelphia – most having athletic teams. Back in the day, many promising athletes did not make school teams because high schools may have had upwards to 2,000 or more students. However, athletes did not have the opportunity (know what their level was) to participate at a competitive levels, because almost each neighborhood had a recreation center and playground.

There are fewer recreation centers and playgrounds. Video games have taken place over creative recreation and the joy of playing as a team. I feel sorry for the youth of today who have athletic interest. 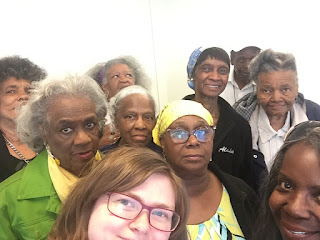 There's never a bad time or place to tell a story, so share an older bud’s story through http://bitly.com/shareastorytoday
I've posted stories about about targets, guns, potatoes, and one about the Rocky Horror Picture Show.Or if you'd like to contribute to our 10th Anniversary celebration, then donate athttp://bestdayofmylifesofar.org/donate/
Curated by Caitlin Cieri
Newer Post Older Post Home