I consider every moment I spend with Best Day’s older buds precious. You never know how much time you have with the people you love, and this was especially true last week.
That was because the Philadelphia Senior Center had to close early that day.
The staff told us that every workshop had to end at 3PM on the dot, so we made sure to finish our stories ASAP. I was rapidly taking snapshots of stories for our transcriber Allison and making copies for the authors. To make sure the older buds could actually get their stories before leaving, I ducked out while they were telling their stories. At some point, I realized I had copied the same page twice and cut off some writing on a few other pages, so I decided to leave them for another day. When I came back, Ann turned to me and said “Caitlin, you missed my story.”
So we all sat with each other and shared our stories until it was time for us to go.

December 6, 1987 dawned gray and dreary with promises of freezing rain and black ice to come. It was moving day – a basic move from a small house to a bigger house just a few miles away. My daughters were 8 and 4 at the time and went off to school as my husband and I got ready for the first of 2 settlements. He kept complaining of stomach pains so I kept feeding him pepto-bismal. He kept getting worse as settlement dragged on and on so the lawyer (who was also a friend) and I used the 2 hour gap between settlements to take him to the emergency room where it was decided that he most likely had a kidney stone but they allowed him to go to the 2nd settlement before admitting him.
So a la Weekend at Bernies, the lawyer and I dragged him into settlement, put the pen in his hand then dragged him out of settlement and back to the hospital where a judgmental nurse rolled her eyes at me as I literally dropped him off at admissions. But hey, I had things to do like meet the movers who should be done about now at the new house. However, there was no sign of a moving van as I arrived. Long story short, movers had gone to the wrong realtors office to pick up the key and just sat in the parking lot until I figured this out. It was getting dark when the van finally attempted to maneuver our narrow lane. That earlier threat of freezing rain had come true, I realized, as I watched that van misjudge the curve, take down a power line to the house, and come to a halt after hitting the shed. My brother-in-law arrived just in time to deal with the movers, so I went over to the new neighbors house where I was kindly outfitted in a coal miners hat with the headlight along with several flashlights to use as we waited for PECO to restore power. It was now clear that the movers had put their down time in the parking lot to good use by drinking.
Luckily, they were happy drunks, laughing and singing Christmas songs as they pretty much rolled in our furniture, dropped and dented our new washing machine and broke several framed prints and my grandmother’s china which I never cared for anyway. At this point, I gratefully accepted their bottle of beer and joined in a chorus of “Jingle Bell Rock.”
By now, my children had arrived with my sister-in-law. She and I quickly hung a few pictures and ordered a pizza, trying to give my daughters some semblance of calm in the chaos. Suddenly I remembered I had a hospitalized husband so I called to check on his progress. Yes, he had passed the stone and was entertaining the nurses with his funny stories. Ha ha. Luckily, they kept him overnight. My in-laws helped me find and unpack the essentials – toiletries, linens, blankets, a few dishes, and change of clothes before saying goodbye and leaving me and my two young daughters alone in this very big, every old and very creaky house in the middle of the woods with no curtains on the windows.
I realized that we probably got such a good deal on the house because it was haunted. My thoughts were thankfully interrupted by my sweet 3 year old who asked me to find her stuffed animals. So we wove our way thru the myriad of boxes in the hallway and miraculously found her treasured friends in a box on the first try. We put her new sheets on her new bunkbeds and she crawled between the sheets with her animals and quickly fell into a contented sleep. My older daughter was happily exploring her new room with the built-in bookcases and drop down desk. I reflected on the stressful events of the day someone proud that I kept myself together, unaware that the day’s biggest challenge was about to arrive in the form of my sweet 8 year old daughter who was making her way thru the hallway box maze and into my room.
“Mommy,” she said, “I don’t think there is a Santa and I want you to tell me the truth!!” I was not at all prepared for this conversation and I made a few attempts to convince her otherwise. But she was relentless and I caved saying, “OK, there is no Santa!” Then burst into tears as a result of the stressful day and my questionable mothering skills. My daughter, however, was very happy to know she was right and crawled into bed next to me where we held on to each other and fell asleep. 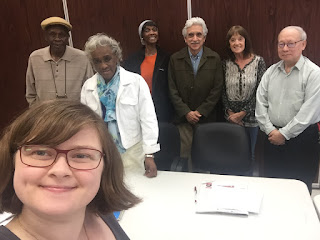 Don’t wait for a building to close early to spend time with your older buds. Talk to them and share their stories through http://bitly.com/shareastorytoday
If you're looking for a little inspiration, than you can read some of the stories I've found throughout the year. One about targets, one about guns, one about potatoes, and one about the Rocky Horror Picture Show.Or if you'd like to contribute to our 10th Anniversary celebration, then donate athttp://bestdayofmylifesofar.org/donate/
Curated by Caitlin Cieri
Newer Post Older Post Home