Last week’s session was a little different, because Best Day went to Drexel! We teamed up with their Dornsife Center for Neighborhood Partnerships, FringeArts and Philadelphian performance artist Makoto Hirano. And the best part is, we got a new regular. Older bud Joyce came to our workshop and planned to come back, but things got a little busy for her. So imagine my joy when she found Rochelle and me right before we left for The Dornsife Center. After some expert navigation from Rochelle and nervousness from me, we arrive at the workshop and saw Delores, José, Norman and Victoria (another former Best Day Facilitator.) 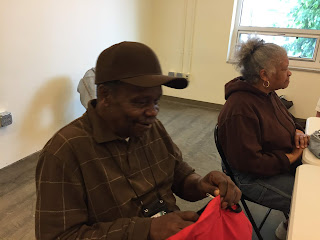 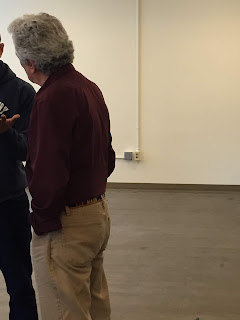 We spent the day working with local artist Makoto Hirano, who was inspired by  his idea with the Sincerity Project and the many twists and turns his life took. We did a couple of exercises involving emotionally charged memories, and then dramatized each others’ stories. During one of the exercises, where we were asked to identify objects in the room, Rochelle and a new older bud named George had a lengthy discussion about exactly what types of pipes and plugs were being used in the building, so we got to learn a bit about electrical engineering, and how widely studied it used to be, that way. We also found out that Joyce started working as a Democratic campaign manager while recovering from chemotherapy, and got so good at it that she met President Obama...five times! 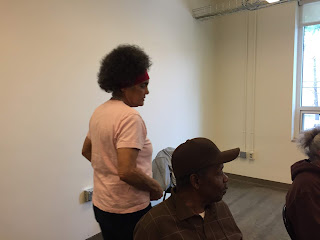 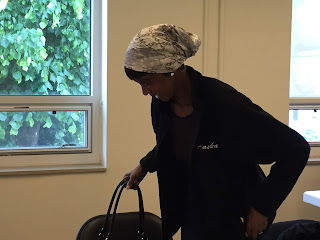 I didn't get the chance to hear everyone's stories from that day, but everyone there was excited to meet each other the following week. So I'll try to get some new stories to put on this page then. In the meantime, how about a few older stories from the folks who went to Drexel? 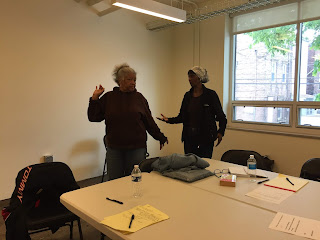 The patient and I hit it off in a good way. I liked her immediately and wondered, where did I know her from? I also noticed she was observing me while I was taking her vital signs. She asked me if I danced. My reply was responding, “Yes, for fun!”
As I was evaluating her she looked like a dancer herself and I wondered where did I know her from? She looked so familiar. After two days, I finally asked her where did I know her from?
She evaded the question and asked me quietly if I liked jazz. With a resounding, “Yes” I replied. Then she said Arthur Prysock will be [her guest] and she wanted me to meet him. True to her word, her call light came on in her room and there he was. I had just been to one of his concerts a few weeks prior. I got a chance to tell him how much I enjoyed his concert and was looking forward to the next one.
In return, he gave me an autographed copy of his latest album. The next day, she was discharged (the patient that is). I asked one of my friends who went to Juilliard in New York and he said she was Josephine Baker.

When I do something against my conscience, there are options: I can continue as if nothing happened, or I can do something about it. But what to do about it. If I damaged the other person, I will have to ask for pardon. But a simple word “pardon” is not enough. I think I will have to recognize my fault with my excuses face to face and try to repair the damage. Nevertheless, life is not so simple. I will write some situations that I experienced related with pardons.
My first encounter with asking for pardon was when I was 6 years old and I was attending a Catechism class with a very gentle, but strict old maid named Snort Claudia. She was instructing me on the basics of Catholicism because my mother, who was a convinced religious person, wanted for us to be good Catholics. After finishing my studies, I will be prepared to submit my first verbal confession to a priest and after the priest’s pardon, I will be ready for my first communion. By that, I will say it means to have the soul clean to receive the body of Christ. Now I have that clear image, but at my short age of 6, I thought that it was like going to school, receive a class and memorize to pass a test because I didn’t want problems with my teacher, my parents, or with God. Imagine. I don’t know where my moral conscious was before because I didn’t understand how the 10 Commandments applied to my insipid and tentative infancy. Nevertheless, I acknowledged wrongdoing trying to put on words some of my deviant behaviors or trying to imagine myself doing wrong things often, offending God, my parents, and society and later asking for pardon. Pardon of what? Well, I learned also some general wrongdoings that helped me to cover the procedure in my infantile language. I learned to say: “I had had dirty thoughts,” “I have said dirty words,” “I have lied,” “I have been lazy,” etc. Perhaps, I convinced the priest of my sins and mostly of my repentance that solemnly gave the absolution since then, I have several tasks in my life.
What does my conscience say?
Do I repent of my wrongdoings?
If I do, do I have the courage to face the victim of my actions?
Have I made the real repair to the victim of my conduct?

My only experience with Tennessee was when I went up to a sightseeing point up in Chattanooga. I was on the bus, on the floor huddled up against the wall on the passenger’s side praying, “Lord, if this is going to be the end, just make it quick. I don’t want to see it coming. I don’t want to spend the rest of my life in bed getting my diapers changed.”
And the driver wasn’t even supposed to be going up that way. What she was supposed to do was to drive us to this old railway station so we could ride the train to the top. But she got on the wrong road and kept driving up very slowly, because you can’t go over 20. The roads were very steep and very narrow. I don’t know what made her stop, but she started driving down and people who lived up there were driving up and going up to their homes.
Still, she was a good driver even up those mountain roads. If I had too I’d ride with her again; but not up the mountain!

Drexel University’s Dornsife Center, located at 36th and Spring Garden Street, is a 3-building campus that stands on a meticulously manicured carpet of white snow in the winter and the ultimate of green grass during the summers and spring, a bed of the fall found on the carpet of multi hued leaves that fall from the nearby streets. The western building serves as a middle school during the day and as a classroom for the side-by-side program which is a program that integrates Drexel students with the community folk. The students of course pay and receive credit, while the community students receive free tuition and books.
The center building houses classrooms among them: Recording Studio, Kitchen for Culinary Students, Medical Center and rooms for a choir, writers workshop, lectures, and many other programs including programs with certifications, writing, dances, and counseling.
The unique thing about the Dornsife Center is that its patronage is a community of interracial and intergenerational folk who co-exist in harmony.

There's never a bad time or place to tell a story, so share an older bud’s story through http://bitly.com/shareastorytoday
I've posted stories about about targets, guns, potatoes, and one about the Rocky Horror Picture Show.Or if you'd like to contribute to our 10th Anniversary celebration, then donate athttp://bestdayofmylifesofar.org/donate/ 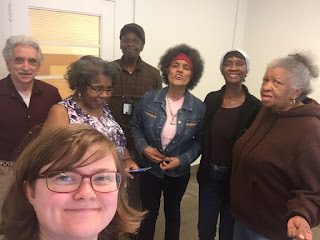