Ellis and Marci (A Night Together) 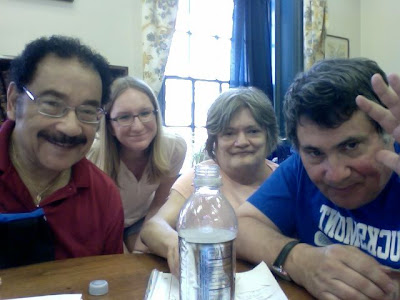 The World Series kicked off with Game 1 yesterday, so let’s do a pair of baseball stories, to get us all in the mood! Best part is, these stories are about so much more than baseball.

When Ellis read his out loud, about his night with his sister at the game, Marci was sitting next to him. I remember watching her watch him. He was holding his paper tightly but gently and looking intently into his written words with his reading glasses on; she was soaking in his voice and focus with a slight smile – that’s how love between siblings look and sound like, I thought.

And then, it was Marci’s turn. And guess what Marci read about – the same thing, her night with her brother at the game, from her perspective. Marci beamed, because she knew she successfully surprised us all, especially her brother. We all laughed. And then I remember watching Ellis watch her. There was again, the look and sound of the love between siblings.

It’s not just what is written and how it is written - but how it was read out loud. On the surface the words below may be about a baseball game, but to me they’ll always be more.

On Wednesday, August 17 my sister and I went to the Phillies-Arizona O Backe night game which started at 7:05 P.M.  We were all set for an exciting night of baseball when our hopes for an early night of baseball were dashed at the computerized ticket processing machine.

I made the mistake when buying tickets that I never had made and will never make in the future.  I bought 2 $20 tickets two weeks ago for Tuesday, August 16 and we were denied admittance to the Wed. Aug 17 game.  Next a panic ensued in which we were faced with going home without seeing our game last night.  We sat down and examined our options. They were (1) go home somewhat depressed without seeing a battle for first place, (2) come up with more money and go to the nearest sales window open and ask what the cheapest tickets were.  We overcame our shyness and the sales person found $25 tickets (2) and a big rock was removed from our backs.  We could attend the game and got to see our heroes in person.

The game was tied going into the bottom of the 7th inning.  The Phillies rallied for at least 3 runs in the 8th and 3 or 4 runs in the eighth.  All our dreams came true and we found we had a tremendous time among other 45,000 fans.  It was relaxing; no one was drunk and unmannerly.  When we got home we reminisced about our great night at the game.

Last night my brother and I went to my very first game that I saw a game.
An earlier date, my brother bought tickets for a game a day later I had to dig up my debit card to pay for valid admissions for the two of us.  I had no choice – we were there already!

The start of the game wasn’t fun and games.  In fact, for the first 6 or 7 innings – the Phillies were behind the Diamondbacks.  Then in the 7 inning, Wilson Valdez hit a double off the wall and brought what was to be a Phillies landslide victory.  In fact, the Phillies went on to win a 11-2.

Then came the ride home.  There were dozens of taxis lined up outside the park.  My legs tire and feel pinched due to neuropathy.  I momentarily yearned to be among those who could afford the fare and easy ride home.  There were a 45,000 people attending the game and I freaked out, envisioning a mob scene exiting.  I was wrong.  I miraculously saw that others were exiting peacefully and I started to relax.