Aileen and Gloria - Our Mother and Daughter 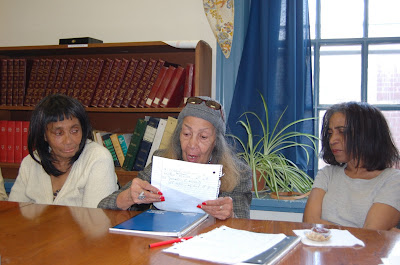 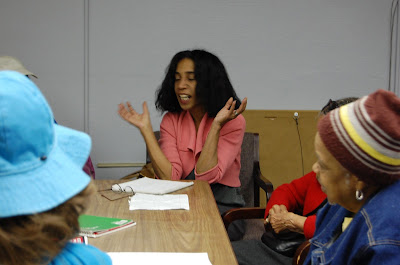 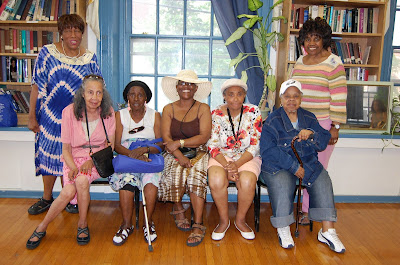 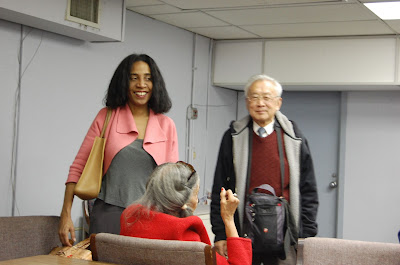 As you know, our class feels like one big family. There’s no other way to describe the feeling at our table. And for those of you who’ve been following along, you know our “fam” includes a couple pairs of real-life siblings. We’ve got Ellis and Marci whom you heard from in the last blog post; and our famous twins Beatrice and Bernice.

Well, guess what, we’ve got a set of mother and daughter too! Aileen and Gloria have been attending for months now, and everyone in class calls them Our-Mother-and-Daughter. Like Aileen is everyone’s mom and Gloria is everyone’s daughter – I can’t help smiling whenever I hear their combined nickname. So simple and innocent, but so totally magnificent.

Gloria cares for Aileen around the clock every day, and when they first joined months ago, I remember Gloria taking a backseat saying that she was just there to help her mom out. Gloria would write but for weeks Aileen would just listen. Then Aileen began writing too, and her words became more playful each week. Still, for a while, her reading voice was timid, and when she came across a harder-to-decipher part of her handwriting, Gloria would jump in instantly to help. But then, Gloria began giving her mom more space, and it’s like… it unlocked something – Aileen’s reading voice literally grew clearer and louder week after week, and Gloria’s own voice became happy and excited, and now the two of them just sits back and gleams whenever the other person reads. And THAT right there, watching each of them sit back and give the other person space to be herself, is a totally magnificent thing. Love comes in a number of forms, and I’m pretty sure that’s one of them.

New faces, New Experiences
And above
All speed – finding at this market
Money saving bargains

You’re seated on the train and
10 minutes later, you’re there. Where?
The market of course. Tremendous
Advantages – strawberries for 75 cents
A pint of candied ginger, 50 cents
A pound, if I proceed, you won’t believe it me.

In the writing workshop, I can
Imagine hearing, “Where? Tell me
Where? How do I get there?”

And will you tell me why
This is my first visit to this
Miraculous market? Proximity!
…All this in the neighboring township.

I dream about food.

Often I visualize the whole process
procuring the seasonings
a spicy garam masala
spelled Garam
MASALA
This is an Indian spice with many ingredients, from cayenne pepper to cloves and garlic.

I also like Chinese 5 spice. This is a piquant spice that embodies ying and yang of seasonings.

Did I say I love lamb.

Once I went so far as to buy a shoulder of lamb, freezed and carried it on an airplane to visit friends in a part of the country where lamb is not so easy to find.

I also experienced a Mechoui where a whole lamb was roasted on a spit. This was in the Carribbean or a French island.

When you rearrange the letters in Lamb
Lamb you get

The anagram Balm, perhaps that’s what lamb is for me,
a balm for the soul.