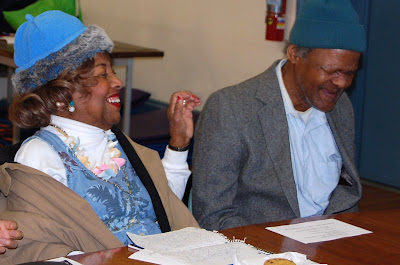 The only act that can follow the previous “star”-studded blog post is… hmm, a lil’ act of kindness, perhaps ;) ?

Sometimes it seems like this is a very impolite era, but then I look around and I realize that isn’t true.

One day, my daughter had pulled us in front of a restaurant and I opened the car door. I began to get out, and immediately, a lady took my arm and walked me to the door.

Another time, a young couple, who were talking to each other in front of the restaurant stopped and got on each side of me. They escorted me to into the restaurant.

This past Tuesday my daughter got up as usual and started to drive down I-95 at 6:25 A.M. The weather report promised the day would be sunny and beautiful. Before leaving the house, the reporter on KYW stated there had been a traffic accident, but it would soon be cleared. Well, we had been on the road long before there were two other accidents. A back had begun to occur and soon we weren’t even moving. Finally, my daughter called her school and told them of the situation.

Eventually, we reached Philadelphia and turned onto Front and Lombard Streets. We were very late for my daughter’s job so I told her to hail a cab. I didn’t want her to drive me to the Senior Center and make her later still. There are always a lot of taxis in the area.

As the cab pulled over and I bent down to open the cab’s door, I heard a voice say, “Let me do that.” This gentleman reached out and opened the cab door and placed my coat, which was hanging out of the cab window, on the seat and beside me. He said, “Have a nice day,” and closed the door.

This is a beautiful world in which we live in because there are many beautiful people in it.