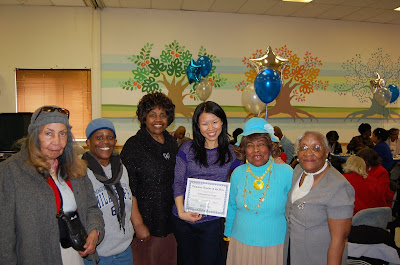 I am humbled to share that I was awarded Teacher of the Year by Philadelphia Senior Center last Friday! The best part was having my senior buddies by my side, and seeing how happy they were. Here are a few very kind words from Vicky Lynam, the center's fabulous director. Thank you, Vicky, for letting me to barge into your office that summer day, and for your unending support!

I first met Benita Cooper in the doorway of my office in June 2009.  Our then Volunteer Services Coordinator, Helen Sunga, had brought Benita to meet me, the Director of Philadelphia Senior Center (PSC), because she wanted to volunteer.  We proceeded to have an animated conversation in the hall just outside my office because she had come to with an exciting idea for a new class – a writing & storytelling class for the members that would allow them to share some of the hidden treasures of experiences from their pasts.  She shared that one of the writing prompts she would use for the class was “The Best Day of My Life…So Far” – which I thought was great. I loved the positive, upbeat quality of both Benita and the phrase “…So Far.”  And she was willing to volunteer to teach it – even though she is a Harvard trained architect.  Having grown up in Hong Kong, she’s bi-lingual too. Wow!  We stood there throwing out ideas and getting very excited about the prospect of what could happen with this new class.  We decided we’d try it as a 6 or 8 week series in the fall.

September came, then class started…it gradually grew in numbers and intensity.  The seniors attending the class begged Benita to consider doing it as an on-going class instead of a series.  They were having so much fun and the group was developing such a bond with one another, they didn’t want it to end.  Neither did Benita or PSC Main Branch.  The whole phenomena expanded, developed, and grew in ways no one expected at the beginning.  It seemed almost miraculous to me.  The blog that Benita started to link the seniors’ families with the stories they were writing became very popular, and the stories on it never fail to touch me in a very deep way.  The families of some of the class members have expressed their heartfelt appreciation for the blog – and their responses have brought tears to my eyes a few times too.

The class, the blog, the relationships, the wonderful stories the seniors share, the commitment and enthusiasm of Benita herself – these are all wonderful things.  Things that add depth and meaning to the lives of the people involved.  This is why we decided that Fookling Benita Cooper should win PSC Main Branch’s Volunteer Teacher of the Year award, which she graciously received at a ceremony today. Keep doing what you’re doing, Benita.  We at PSC all appreciate it and you!