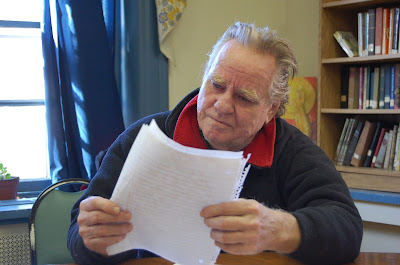 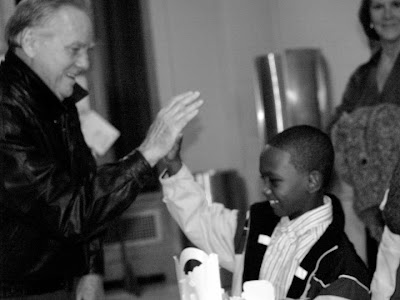 I am constantly impressed by how much detail Mo is able to remember (+ willing to share) of his adventures as a young boy. I was rereading some of his stories today, and it occurred to me just how vivid they are… I can SEE the cops – whom everyone knew by name, imagine that – patrolling the sidewalks, keeping the town “safe from jerks and punks”. I can HEAR the neighbors cheering in unison for each homecoming veteran, and for every well-played baseball match. I can TASTE and SMELL that famously delicious and infamously stolen lemon meringue pie. I can TOUCH… well, for one, “the first low roof on a town building or unused garage” under my shaky feet as I get ready to parachute off of it!!! Yup, that’s Mo. Always taking us right there into the action.

(Haha I sound like I am talking about a movie, don’t I? The Oscars are coming up soon afterall… and Mo’s stories rival the most "realistic" 3D blockbuster if you ask me!)

From my earliest memories, there were cops around.  My dad’s older brother, Joe, was a township policeman as were Mr. Norton and  Mr. Tierney.  Their children were friends of ours.  Our town had it’s own police force who lived in the town.  Some of their kids went to school with some of us.

Sargeant Girvin was the head of the town police.  He knew every kid and would not  hesitate to holler at us or even chase us if we were where we shouldn’t be but we all liked him a lot and secretly called him “Charlie the Cop.”  He was ably assisted by Augie, Boots, Jake and George.  They all kept our town safe from jerks and punks. Officer Di Bonn, his wife and beautiful children had a lovely home on the street between my house and my Aunt Helen’s, where I hid between a tree and ate  a large lemon meringue pie meant for my family.  But that’s another story!

Our town seemed to have a baseball game in play every weekend.  Out first baseman, Buddy Walker, played in the Major Leagues during the war.  During WWII, an outfielder named Jerry McCarthy was brought up to the St Luis Browns in the American League.

Many of the churches had adult teams.  I was very proud of my dad and Uncle Tommy for playing on these very skilled teams.

When the men were playing they took up the space of a college team.  When we elementary school kids played, we could field three teams and often did.

At the end of WWII many of our citizens came home and the cheers arose again.

During WWII the news reels and some of the main pictures would show parachutes leaving airplanes and landing in trees and on the ground. When we left the movie house we would look for the first low roof on a town building or unused garage to become parachuter’s. Sounds of “Geronimo” filled the neighborhoods.

When I could walk even a little bit, my Dad would take me all kinds of places to meet all kinds of people.  People who worked at auto factories, truck manufacturers, railroad car plants elected my Dad to represent them to the owners of the companies through managers and other non-union workers.

As soon as I went to school, I would add union comic strips and books to the Batman and Red Rider comics I could trade. Dad did not push the information, but it was an interesting part of my early education.

There would always be a movie, circus, fair, sportsmen show, rodeo, auto show, or church fundraiser during that day.  I loved the city.

Some of my mother’s aunts and uncles lived in West Philadelphia, where many white families had moved out to the suburbs.  It opened up a whole bunch of new kids to play tennis, baseball, touch football and games I forget.  Their families were wonderful.

My Dad’s brothers and sisters were in the northern districts of the city.  Grandpop bought some farmland in Bucks County on a beautiful creek, but he lost the property to prohibition.  More to follow…