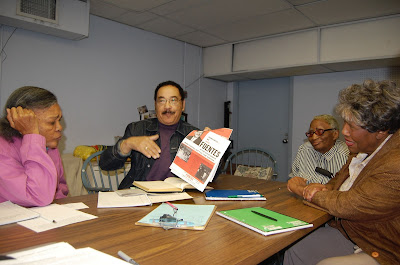 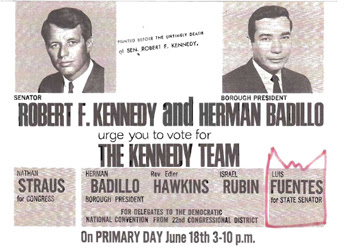 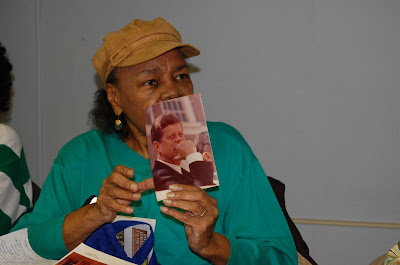 Every week, I witness it with my own eyes and ears: it’s a small world after all. I love sitting with my senior buddies in class, hearing decades of experiences converge and overlap at one table. As Hazel says, it’s indescribable really, how one senior’s story can trigger that of another senior’s, and on and on.

This story doesn't work without its visual aids! So here are 3 pix: 1 of Luis showing his papers from his senatorial run with John Kennedy (yup - our very own Luis is a big deal!) (btw I like how Hazel is listening intently on his left, don't you?) 1 of the actual papers themselves. Followed by a pic of Hazel showing her photo of JFK. Small world in a big way, right?

After Luis distributed papers showing the time that he ran for an office in New York on the ticket with Robert Kennedy, I remembered my photo of President John Kennedy.  The picture was given to me by a sixth grader, many years ago.  It just reinforced the fact that November twenty second was the anniversary of his assassination.  He was a leader, a realist, and an idealist who embraced economic opportunities, civil rights, the arts desiring to make the nation special.

While searching for the photo, I stumbled upon some of John Lee, another student and a real live boxer.  He was excused from class many times to exercise as directed by the physical education teacher.  I was informed of his special diet of eggs and other foods.  With his grandfather’s appearance often in the classroom, demonstrating great support and encouragement for the upcoming champion.

The connection this class offers is indescribable.