Arts and Leisure (José and Diane)

Coming up next is the second part to Diane Richardson's story "When I Met My Hubby." But first, an update on José's art show. 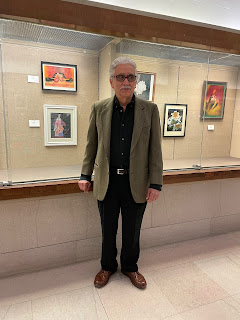 I had a great time at the show, and I loved seeing José's artwork on display. The best part was listening to José give the backstory to his illustration, and seeing how much his friends appreciated his work. I don't have the backstory to his shoe painting now, but I do have a story of him appreciating a friend's creativity back in school:

To Cheat During an Exam: a curiosidad mató al gato addendum

Each teacher has a different idea about educational evaluation; for example, many years ago I asked to my dear Philosophy professor Federico Ferro Gay his opinion about cheating during written examinations. After several seconds of spontaneous laugh he told me: “In my case, in the courses that I teach, the student is the total responsible of his learning process. The general idea of the philosophical studies is to inspire student to have an encounter with themselves. If we all are ignorants as Socrates asserted, who is the person to judge who knows and who doesn’t. But this essay is not to write about to copy or not during written exams. I’m writing about what happened one Spring morning of 1959 during a monthly test when I was studying my third year of Secondary education at the Instituto Regional de Chihuahua under the supervision of our teacher Mr. Medina. My group was identified as 3A and our classroom was located in the main floor just in front of the subdirector’s office. Crossing the room at the end was located the black board; to both sides our chairs were symmetrically distributed in rows. Entering to our class room my chair was to the left and near to me was seated my buddy Federico Garcia Terrasaz. He was a real pal and very often we shared our playtime together. Our teacher, Mr. Medina in those times was a celebrity in our school. Of all the Jesuit teachers no one surpassed him in severity. With him there was no middle grounds; so, it was impossible to act with him with imprecision. Added to that, he was always in a state of alert. That morning Mr. medina was in charge of the application of the test. The alternatives were scarce, the only possible thing was to answerer with how little or how much one knew. After delivering the questionaries he assumed his vigilant posture as always, scrutinizing with his eagle sight each corner of the classroom and each movement of our adolescent existences. Suddenly I was astonished to see Federico, who cold-blooded opened his left hand and began to read something he had written on his palm. I never had imagined Federico copying in one test, but now looking at him I was amassed how with out dismay was cheating in front of the wrong teacher. I guess I began to tremble feeling that a thunder storm was going to start, and it did. Abruptly in front of him Mr. medina appeared and sharply asked Federico: ”Show what you have written in your palm!” Not losing control, Federico answered calmly:” “It’s nothing related to this class”, “I will determine that,” said the teacher and at the same time he took Federico’s arm to read the text. Mr. Medina’s face become transformed by rage and boldly commanded: “Go out and find me later to speak to you” I was really intrigued about everything… how come my friend being a good student was cheating… and how come Mr. Medina did not disclosed Federico fault… Once I finished my test went directly looking for Federico and when I found him he told me: “Oh, that professor does not have any sense of humor.” I asked: “ What happen Federico show me your hand” There in his palm was written the Mexican saying “La curiosidad mató al gato” equivalent in English: “ Curiosity killed the cat”; so Mr. Medina did find funny to be call “cat” or either that curiosity killed him.
Conclusion: Too much solemnity can be uncreative and, remember, curiosity doesn’t kill creative people but to some other people is a deadly dangerous.

When I Met My Husband Part 2

So, after meeting him and giving him my number, he finally called. So you can get a mental picture of him, he is 6 foot 2, two hundred fifty pounds and sort of chocolate. No pretty boys for me. We talked on the phone a few times. Getting to know him I found out he worked most all the time. Didn’t smoke, or drink, didn’t do drugs or hang out. His hobby was going to the Supermarket and buying whatever was on sale and give it away. Much as I do now but with online shopping.
His Aunt Lorene lived directly across the street from me. Her and Joe’s mother Pearl housed and took care of mentally handicapped adults. They would cook them three meals a day and take very good care of them. They loved it there. Joe would drop the food off to them that he would purchase after work. When I told him where I lived, he told me about his aunt across the street. So, I said, “The next time you drop off the food to your aunt, come have lunch with me.” That next week we had a date for lunch.
I had a three room third floor apartment. It was small, nice, and clean and just right for me. He came for lunch, and we had a nice time. I liked how shy he was. I love shy guys. He said he had to go to work and would call me soon. He mostly worked the evening shift. When he would get off work, he would to the Pathmark to shop for whatever was on sale to give away to his family members.
He had a co-worked that his car broke down and wouldn’t be repaired for a few days. Joe offered to pick him up and drive him home until his car was repaired. So, on this first day on the way home from work Joe stopped at Pathmark. The co-worker complained, “When I work all day, I’m tired and want to get home and don’t want to be going shopping.” Joe said “I’m sorry” and drove him back to the job where he waited to catch his buses at 1AM.
To Be Continued... 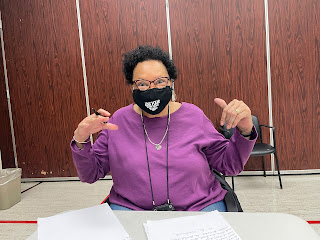 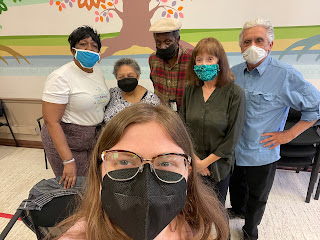 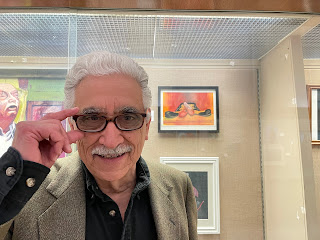