I only realized when Veterans Day was by the notification on my phone. Every holiday feels a little weird now, and Veterans Day feels especially somber because of the untold number of veterans who lost the battle with COVID-19; including my grandfather. I've regularly posted in honor of Veterans Day on the Best Day blog, but this year I'm interested in the families of veterans. Here's a few posts from a few older buds with relatives in the military, along with a poem from my Gigi for her veteran husband (then fiancé.)

What a difference time makes. I who was anti-war and one of the voices of protestors against the Vietnam War that started before I was in my teens. As my perception change, and realized not to blame the soldiers, I began to appreciate what they had done. Whether I was in agreement with the war or not, the men and women who served and sacrificed their lives so I could enjoy the freedom that I once took for granted.
My mother’s younger brother served in the Korean War and next to the oldest died with wounds afflicted from the World War II War. My brother did four years in the Marine Corps and we learned later that he did an extra 4 years so that my younger brother would not be drafted. I recall when the soldiers were discharged from the Vietnam War, they would arrive at midnight so they would not have to face the protestors. I’ve repented of my wrong attitude: I’ve asked my brother to forgive me for acting like a “hickey head.” When the country finally gave the men and women that fought in Vietnam War a parade, I made certain that I had that day off so I would attend. From that day to now, when I encounter men or women in the military I express appreciation for them for laying down their lives for us by thanking them and letting them know I appreciate what they have done. 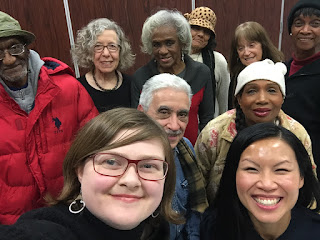 The subject that was suggested was feeling lucky, and I had never thought about feeling lucky until I thought about maybe, I had something to be lucky about if I thought about the past. So that’s what I started doing.
I am one of seven children who was born in the segregated South. And when I say “segregated South” I mean schools, busses, but we didn’t even have busses because there were only about ten thousand people in the whole town. And my grandmother worked for a rich family (a Caucasian family of course) and she had to go to the house by the back door. And then she could go the front door, and sweep off the steps. So that was a part of being in a segregated city.
So one of the things that happened was in our family of seven the oldest person in the family was with a boy cause there was five boys and two girls, and the first four were older than I, and I was the first girl born. So my oldest brother was thrilled, cause that meant that he would no longer, when I got old enough, have to do the girl things.
So that was the part that began and ended when I got old enough, because then I took over some of the duties. And which meant doing whatever. And so my oldest brother was in the Navy, and he got there because during that time most of the black young men were sent to the Army. So my grandmother worked for this white family, so she was able to get him in the Navy, so he never had to go in the battlefield. And when he came back he said to me, and to the rest of the family, “The important thing is getting an education, and getting out of Lawrence.” So that’s what we did.
The oldest person helped the next in line and that was the way it went. And when I went off to school, with the help of my oldest brother, and another brother, the thing that happened I met my husband, which was a lucky break for me. He was generous and kind, and we had a good life. He is no longer living, but he worked for General Electric and NASA. And I worked in various places.
But to me, I don’t think of it so much as luck, but having great parents and having a goal in life gives me a lucky feeling. That’s me. 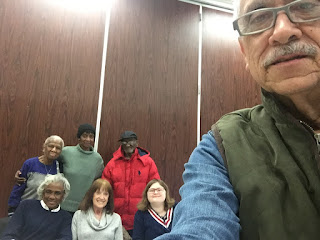 Take a heart and fill it with love,

As true as the blue skies high above,

Make it as shining as the gold sun,

And this heart no one will shun,

The sadness or the sorrow of a pearly tear,

Will never enter this heart so fair,

The height of the sky and the depth of the sea,

Can contend with this heart, but very humbly,

Take the brightness of all the jewels in the ladn,

But still more jewels are in demand,

The beauty of the flowers on a summer day,

But even this cannot mar the way,

The biggest clouds, the stars and all,

The towering mountains and trees so tall,

The heart hold more love than this,

More than can be told in the magic of a kiss,

You ask "Can there be a love so true?"

Yes Sweetheart, the one I have for you. 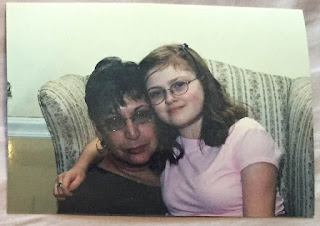 If you want to transcribe for Best Day, then email us at info@bestdayofmylifesofar.org. You can also share our older buds' adventures by donating to Best Day, subscribing to our newsletter, sending a note to our older buds, or following us on Facebook, Instagram, and Twitter. And if you know older buds who were in the military, then you or they can submit them through our portal right here. We're especially interested to stories from Black older buds, but we're always looking for stories from older buds of color, older buds with disabilities, LGBTQIA+ older buds, older buds of any gender or sex, older buds of any religion, and older buds who just plain break the mold.
And don't forget to maintain contact with the older buds in your life. If you can't be there in person, please call them, email them, or message them on social media. And if they're using teleconferencing or remote events for the first time, give them a call and help them set things up. Check in on them to see how well they're getting used to these programs. Buy them a computer or an internet package if they don't have one of their own. It's a human right, after all.