It’s been seven months since the lockdowns started in Philadelphia, and we’re not completely used to it. Many of us were able to dine outdoors, attend Zoom meetings, and have socially distant get-togethers. But not everything is the same as it was before COVID-19. Best Day has moved to Zoom meetings, but many of our regular older buds can’t or won’t come to these meetings. I can’t blame them, since Zoom can be frustrating even for people who’ve used it before, and many of them are worried about online privacy. There are options to call in by phone, but those have their own issues.

Delores Wilson
12.12.2019
Back to the Future
We children (girls) looked forward to the favorable weather so we could be outside and play our favorite make-up game that consist of clapping our hands together in a circle with a rhythmatic beat.
We would say words in a poetic fashion. The words had to be consistent with the beat of the hand clap. By the way it was called “Re-Cha-Chi-Cha”.
Double Dutch was fun. Each girl had her own unique style of jumping. When we were going out we were getting car fare, but we preferred to walk and talk. Returning home we would ride back. 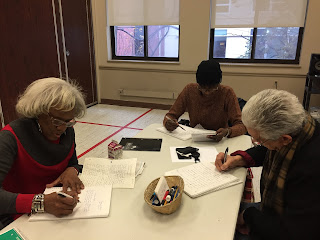 Joan Bunting
11.21.2019
The Day I Could Have Died
When I was twelve years of age, I was attacked with appendicitis. Within two months after the operation, I developed an infection.
Before I started having pain that night, my siblings and I had been eating raw peanuts all day.
When the pain had gotten so bad I started moaning and groaning. But the pain was getting worse every minute. My mother took me to the emergency room. The young intern told my mother that there was nothing wrong with me and that I just wanted attention. He gave me a dose of medicine, told her to put a hot water bottle to my stomach and sent us home.
As I was about to go up the steps into the house I threw up the medicine.
The pain got worse than it was before and my mother searched the rest of the night for her hot water bottle. She could not find it to save her life.
Now it was daybreak and the pain was so, so bad. Back to the hospital we went again. By then the head doctor was there. He examined me and wanted to know who was the doctor who told her to apply a hot water bottle to my stomach. She did not know his name and could not identify him. He told her that it was a good thing she could not find the hot water bottle because if she applied it to my stomach it would have busted the pus bag that had developed from the infection, it would have poisoned my system and that would have been the last of me on this Earth. 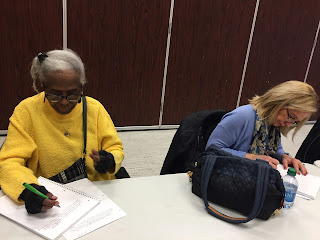 Joyce Woods
03.05.2020
I Wanted a Large Family
I don’t even know what I’m going to say.
Okay, I’ll talk about me.
Back in 1967, that’s when I decided to leave home and get married, I was 19. So a lot of people didn’t think that was quite a good idea. “Do you think you should finish school first?” or “don’t you think you should just wait a while? Maybe you should save more money.” My mother had a lot of older friends and my parents were elderly when I was 19. They were married 21 years when I was born. So they’re elderly and I came up by myself so I had a nice calm life. I didn’t even know I lived in the ghetto. This is on our block, I knew everybody, the same people when I left, and even the grandparents I would go back and take care of my mother. They and all the children would live on that block, the same parents lived there at that time.
So, as far as luck is concerned, I believe in luck, because I know what people mean when they say that. I know what their idea of luck is, and I understand your meaning of it too. I have very diverse life, so I think we have every religion in it from Judaism to Islam to African Methodist, Baptist and I’ve experienced it all. And what I’ve found, most people want good things to happen for their families. They want good honest life. Well I had decided since we didn’t have many children in our family at a very early age I think I was about seventeen that I wanted a large family. Eight to be exact. I would draw my little stick figures. The school I went to I got tired of blue and white uniforms, they were gonna have brown and beige, and I would draw that and it was it in my mind how I wanted these children. Because I was a woman, my father had died when I was nine, and I couldn’t understand why you would carry the father’s name, but I didn’t have a brother. So I said if I biologically have children, well they’ll still be a part of my father, and a part of me, and my mother. So I think I was a very mature child for my age by them being so old. All my friends were old. Even my mother would tell me sometimes, she showed me a picture after I was a teenager, she said, “you see all these people in here?” They were all seniors that had been my friends and passed away. She said, “There’s something wrong with this picture. Everybody’s on here’s dead but you.”
So I didn’t have hardly any friends when I got older too much but I did have a large wedding. It wasn’t intended to be large, it was supposed to be fifty people and I think the way I thought I wanted my mother to be happy because if I had lived with my boyfriend she would have died so I decided to go ahead and have a wedding. But it was supposed to be small. We ended up with nine children. The reason why we had nine was because, and they were all full-term natural births, I didn’t have any medication, nothing to put me to sleep, not that I was a hero but we were trying to eat right. During the first time that I first got pregnant we started reading books and started going to Lamaze classes, everything that we could get our hands on was trying to find out and it was a very nice experience.
So a lot of times, and you see I’m not really lucky, I don’t gamble. A couple of times I did try to play a number I never win. I’m talking about street numbers back in the day, right? So anyway I did it a couple of times but I don’t like to lose money, I like the shows if you go to Atlantic City. I used to be a lifeguard out there as a teenager.
Okay, sorry. Okay, one more thing.
So, after having nine children, a lot of people look at me like, “oh my God,” you know, they look at you like you’re a piece of meat or something, they have a bad idea. But I thought out how I was having children, and that’s what I wanted to do too, and I think that I have some pretty good children. Not everybody has the same type of experience but I think several of them have gone on to college and finished. One works at NASA and that gives me an opportunity to travel. I met a lot of the astronauts there. When they go different places I can go as long as I pay for my plane ride, everything else, I’m there, I could be anywhere else in the country. So they’ll send me tickets, and I can’t afford all of these things but having a lot of children in my family worked out nice for me. 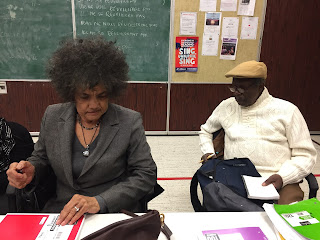