I like to keep The Best Day of My Life (So Far) running throughout the summer. I know a lot of the workshops at the PSC take breaks for the summer, but I also know the older buds won't be away for the full three months. And the most interesting things can happen over the summer, because that's when everyone's taking breaks from their job. Benita dropped by for a visit last week...and a ten-year anniversary interview! Five to six of our older buds were asked about the time they spent with Best Day, their relationship with our fearless leader Benita, and how Best Day helped them in their every day life. We got a mix of older and newer writers, but many of them came to Best Day after Benita's maternity leave. Nonetheless, I can't wait to show all of you the interview!

Another thing that's happening during the summer is storytelling shows at The Moth. Many older buds were interested in telling stories and seeing their friends onstage, but they weren't interested in staying out until dark. Luckily, the days are longer in summer, and the weather's warmer. I plan to take as many older buds as possible to The Moth during their July and August shows, and I'll naturally let you know how those shows went. 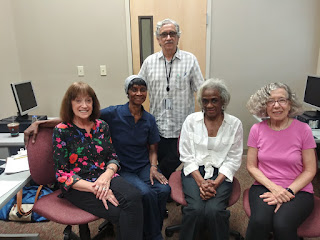 Curious about what a Moth story from one of our older buds would sound like? We have a few samples right here!

My car, like most cars, has a remote and a key that are both used to gain entrance, but yesterday I found that was not necessary. I was on my way to my line dance class, when I decided to stop and put something in my car. I noticed on the driver’s side beads of glass. I took little notice at first, then the reality of why the beads of glass were there hit me. Someone had decided to see what valuables were inside and break the back window on the driver’s side. I looked inside to see that all the things that had been in the glove compartment were now scattered on the floor; manuals, registration and insurance cards. The small purse that held quarters was gone. It may have contained three or four dollars.
I reported the accident to police by phone, another person by phone took the information. He was hung up on the exact number of the street, a lady finally took over and knew exactly what the important number he was seeking was. No line dance class, I needed to find a place that would repair my window. I scanned the white pages after my online search. Then remembered to call a friend who knew where I could get the work done after I had called the dealer and learned that the cost would be $300 for labor plus the part.
I finally got the work done for less that the labor cost at the Honda dealer. I was unhappy that I had to miss my line dance class, but very happy to have a friend who steered me to a place that did the replacement at a reasonable price. I wondered why my car was chosen. There were more expensive cars near mine, maybe he figured that a civic owner probably had money in the glove compartment. I wish that I had left the door unlocked for the thief.

Norman Cain
7.30.2015
A Hot Summer Day Back in the Day
Back in 40’s and 50’s when seasonable weather was predictable, the boys in our crew engaged in prescribed routines that would coincide with the various periods of the year.  During the brisk temperatures that accompanied the fall, we gathered on the street each day to play touch football. In the winter, we threw snow balls, built snowmen and cruised on sleds.  During the spring, we played stick ball and skated. During summer, we engaged in an activity that was held dear.
It was as if each day during the summer months could be considered a heat wave, and to make matters worse, air conditioning was years away.  There were no area swimming pools. We could only envision going to the seashore. Hand and electric fans did not generate relief, but there was a way that neighborhood occupants managed to cool themselves off.  We drenched ourselves in water from the fire hydrant which we referred to as the water plug. We turned on the water plugs, it was illegal, but it was traditional. In order to turn on the fire hydrant, a certain procedure had to be implemented.
We would have a boy stationed at each end of the block to watch out for police.  Two boys would emerge from the alley with a double handled hydrant wrench that was kept hidden in an abandoned building.  The wrench would be placed on the valve of the hydrant and the boys would strenuously and rapidly turn the wrench until the water the water began to pour from the hydrant opening.  The boys would then disappear into the alley, and replace the wrench in the abandoned building.
The neighborhood residents, both young and old alike, would then wade, douse, soak, splash and chill themselves from the refreshing water coming from the water plug.  Blankets of arching dense sprays of water, which was created by a boy’s posterior on the opening of the hydrant would rain down on all under the soothing waterfall. Cars would receive a free rinse.  Buckets of water would be thrown on fleeing victims. Females would have on bathing caps and little boys would race popsicle sticks and toy boats in the stream of water flowing beneath the sidewalk – making sure that their vessels did not go into the sewer.  Eventually, the police would come and turn off the water plug.
Pleasant memories.

Also, we only have five months until our 10th Anniversary Celebration! It'll be all day November 8th, and there will be lots of food, fun, and fascinating stories. I've raised a bit of money through a birthday fundraiser, but we still need support from local donors. If you want to make our tenth anniversary the Best Tenth Anniversary of Our Lives (So Far) then go to https://bestdayofmylifesofar.wedid.it/campaigns/6274 and make a contribution. We have special rewards for groups and families who contribute, like handwritten stories, family photos, sponsored tables, and free lunch!
And as always, we're still on the lookout for stories from the older buds in your lives. If you have any you think would interest us, then send them our way through
http://bitly.com/shareastorytoday. Happy Summer!