Yesterday was Juneteenth, the holiday celebrating the abolition of slavery in the United States. It was established when Texas heard the news about the Emancipation Proclamation, on June 19, 1865, one year and six months after it was signed. As a Confederate State Texas was unwilling to enforce the Emancipation Proclamation, but was forced to follow it after the Civil War ended.

Last week, Frances and I had the pleasure of telling some of the other Best Day members about Juneteenth and its origins. I'm honored to have my birthday on this day, so I want to further honor this day by sharing some incredible stories from our incredible African American authors.

While I was not able to attend a family reunion last week in New Orleans, I was not 100% disappointed because it seems that I’m constantly in contact with living and deceased members of my family via actual encounters and genealogy.

Occasionally I’m contacted with family members by phone, Facebook, or visitations. Because of a genealogy class that I’ve been taking at an adult continuing education facility at Temple University, Pascep. I have been able to trace my father’s  ancestral line to 1812 and my mother’s ancestral line to 1810. That amounts to 205 years ago.

While I missed my anticipated reunion in New Orleans, I am at least in constant contact with my ancestors.


My class that I attend after my writing class often revisits the preamble of the Constitution and did it, or was it written to include my fore parents who were slaves at the time it was written. Slaves at that time were considered property and some of them owned slaves.

The facilitator reminded the class that the Preamble stated “ We the People”, which in any interpretation included all persons whether they were considered by state law as property in fact included all persons, property known as people and that no part of the Constitution excluded slaves, and slaves were not mentioned anywhere in the original document.

The debate goes on, but whether we were mentioned, one cannot deny that we are part of the animal kingdom known as people. The Thirteenth Amendment made it clear that slavery, involuntary servitude, shall not exist within the United States or subject to their jurisdiction. 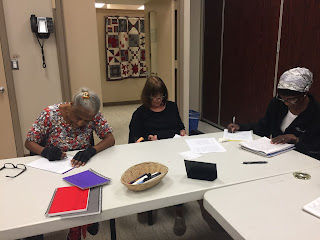 I had a problem with, it was about police officers shooting kids and kids shooting kids. A six year old kid got shot. The police were supposed to protect people, and yet they commit as much violence as criminals. I couldn’t believe that a six year old boy was shot and killed by a policeman because he thought he had a weapon, and he was in fear for his life. I couldn’t believe it. That boy had a play gun, he pointed it at the policemen and he shot him down.

It reminds me of that one television show where the officer was talking to his officers and telling them, “All right, gentlemen and ladies, to it to them before they do it to you,” And he was serious. I mean, c’mon. That’s giving them a license to kill!

And then there was a twelve year old who was shot and killed. Yeah, by the police also. The policeman was exonerated on the same grounds, that I don’t understand. There was a young woman who was stopped by a policeman because her taillight wasn’t working. She was dragged out of her car and then thrown to the ground. She was arrested and they later found her hanging in her cell in the police station. She was announced dead at the scene.

In my neighborhood, where I love, there were two young men who were shot. I was close enough to hear the shots. The one kid, he fell in front of my friend’s door. And the second shooting was also about 50 yards away from where I was sitting. And no one was arrested in either case. Because no one would admit that they had witnessed the actual shooting. Fortunately, neither of the victims were killed.

One of the individuals, he was stopped by police – he was sitting in his car, he wasn’t driving – but he was stopped by the police. Another policeman showed up so they approached together as a team and they shot this guy approximately 18 times Who’d have thought? Eighteen times. It was claimed that he was reaching in the backseat for a suspected weapon. And they opened fire on this guy in his seat and shot him to pieces. Eighteen times.

I got stopped the other day! I was stepping out of the bus and this policeman was running towards me. He said, “You! You stepped out of the bus!” I saidn “Yeah?” He said, “There was a stabbing on this bus and you fit the description.” And I said, “Do I look like I have blood on me? I didn’t do it.” Then he patted me down evidently looking for a weapon and I let him do that. And then he wanted me to take my things out of my pocket and I said, “I’m not going to do that. If you want to di it, you’ll have to charge me and arrest me.” So I saw his female associate across the street so I told her what was going on so I had a witness and I said to the officer, “If you want to search me, you’ll have to charge me and arrest me. But if you do, I will take you to court and I will sue you for everything you have. I don’t t know how successful I will be, but I sure can try.” And then they both let me go and I went on my way to lunch and I know if it happened at night, or if there weren’t any witnesses, I would’ve gotten shot. I saw him reaching for his gun.

So I want to know where is it safe in the city? Or any big city? I don’t see any protection, anyone protecting us, and above all, whom do you trust?

I just recently joined the Senior Citizen Center Choir. Already, I participated in a concert given at the center. Being a newcomer I had forgotten all about attending rehearsal last week. Now, mind you, I just joined about three weeks ago.

My voice is far from being angelic but I enjoy so much singing.

I started singing in a choir at the Holy Trinity Baptist Church when I was about seven years of age.

When I was transferred from one foster home to the next, I belonged to another youth choir at the age of ten or eleven years old.

So to make a long story short I loved singing gospel songs. My foster mother, Ms. Eunice Jackson asked me to join the choir at the Primitive Baptist Church. I would have been the youngest on the choir if I had accepted but when she asked me in my mind I said, “I don’t want to sing with all those old people.”

As I came into my teen years, I sang with my deceased sister-in-law and her cousin in the fifties when there was groups of singers on almost every other corner.

I was and still am a back-up singer.

When I finally joined another church, “Union Baptist” I joined the W. G. Parks. That’s when I discovered I am a tenor. I always thought I was an alto.

I don’t have the voice I had when I was younger but I still sing in the choir at Union Baptist.

I’m glad I joined the choir here at the center mostly because they sing a lot of the old gospel songs.

I get such a joy singing praises and glorifying God.

Even though my voice is not very good, I always ask God to give me voice when I have to sing. 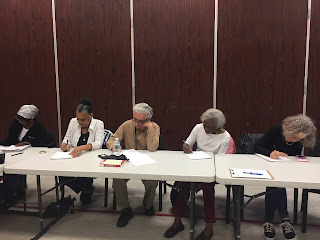 If you have an hour or more to spare, then share an older bud’s story through http://bitly.com/shareastorytoday
I've posted stories about about targets, guns, potatoes, stubborn babies, and one about the Rocky Horror Picture Show.
Or if you'd like to contribute to our 10th Anniversary celebration, then donate at
http://bestdayofmylifesofar.org/donate/ 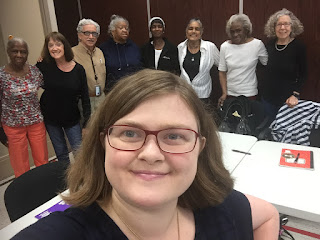