Last Monday was April Fools Day, a celebration of pranks, jokes, and major corporations advertising products you wish you could really buy. Last week, Best Day got into the April Fools Day spirit by switching around the names and dates on our stories. Below is an amended list of who wrote what:

Professor Gates and Me – Something in Common

To make up for this incredibly mild form of deception, I give you stories that were actually written by José, Eugene, Joan, and Delores:

Memories of My Lawyer Experience in Mexico

I guess to be a lawyer in Mexico is not so complicated as in the USA. Perhaps, that’s the reason I ended [up] practicing law. Well, my wife believed it was a risk not only to my clients, but to me as well, so when I went out too work, she prayed to all saints, the holy sprit, to God, to every holy power to protect me of all danger, mostly of my naiveness.I will tell you some experiences I lived so you will have an idea of what I am talking about. Blanca was a young lady close to my wife’s family. She came to our house to explain to me how she was suffering from her husband’s physical and psychological violence. Several nights, I had to hear the sad story and had to assure the lady that I would obtain the divorce from the court. I guess she was so grateful with my services that she insisted visiting my house night after night until late, after dramatic [tearful] sessions. But one day, she appeared at my door and told me, “Mr. Dominguez, I came to pick up all of my papers.” I answered her request saying, “But Blanca, the case is not over." “Mr., it is over, I decided that my husband is the love of my life and I live in peace with him.” “What? And What about all that you told me?” And she answered, “Forget it, its a matter of the past and that’s it.” Zero fees, zero earnings because a troubled couple decided to be happy.Another case was a criminal case working for the defense. My client was [accused] of fraud and robbery. I did a lot of work proving how my client was a good guy, a truthful husband ad a cool champ. The judge declared my client innocent. So I went to collect my legal fees. “What fees Mr.?” he asked. “The ones related to your case.” "But if you read the sentence, I was always an innocent guy, so if I am innocent, I don’t have to pay." Oh my God, I learned to make deals with crooks. Oh now can I skip. Don’t call it story. He was a very poor peasant and one friend of his drove his car against him (to harm him for sure) but in the moment of the stroke Don Calixto to tow bed so he only was injured in one leg so he was suffering terrible pains. Don’t want to write so much but I will end by saying that I took Don Calixto to the doctor and paid for the medicines. I added to my admirer’s club another member but my wife told me, “You are a nice guy, don’t discuss it, but tell me, how are we going to pay our bills?”

An obese man leaned against an antique Cadillac’s façade on Walnut Street by Broad. His gray hairline was thinning out of his forehead, his potbelly sagged down past his brass belt buckle. His brown loafers appeared to be spit-shinned and sparkled in the setting Philadelphia sun. His wrinkled olive-hued face had a look that said – a recent ugly agreement with his girlfriend, a business deal gone bad, or life’s problems just seemed to be taking over and all this caused him to gaze out sadly onto Broad Street as he slowly puffed on his prolific cigars, a cigar whose odor one could detect twenty or more feet away.
And you know, when I examine my life, I don’t have it so bad compared to many others.

How has getting older made you feel? Do you ever wish that you were younger or [there was] a special age you could return to?I don’t. To me, getting older is, of course, a brand new type of life experience.First, as I entered into my sixties, I started going through different physical problems. For a while, I would get a break from having appointments to my doctor. I would be feeling just fine when all of a sudden, a pain would hit me from nowhere. Once I finally got used to that, whenever I would get a pain where I’ve never had one before. I would just laugh and to myself I would say out loud, “Where did that come from?”But you know what? I’m blessed that God has brought this far in this life. I’ve experienced lots of ups and downs but, He has kept me and is still keeping me.First it was [that] females had a problem telling their age and now there are some males that seem to want to keep their age a secret. Why? Be grateful that God has allowed you to live as long as you have.First of all, no matter how young you might want people to think you are, the fact of the matter is that you won’t get any younger than what you are. People know that you’re not young anymore, so be proud of your age and thank the Almighty God for keeping you and giving you chance after chance to develop a close relationship with Him.

Five years had passed and now is time to have my total ID renewed. I was told by the receptionist that I would need $30.50 check or money order and they open at 8:30 however people are waiting in line before that time. I really appreciated the heads up.
This time I was prepared to do some reading. The young lady that was standing ahead of me was very cheerful. She and I began to engage in conversation and her attitude picked me up. It was very engaging to me to be engaged with a person of her youth. When it was my turn to get my information in check, another pleasant surprise. The gentleman that waited on me had a great sense of humor. Next, I was sent to the end of the process to actually have my picture taken. He asked about my scarf and I told him I wore it in the previous ID. He had me remove my picture from the holder and I could see for myself it wasn’t on. Then I remembered it was for my passport. I was told if I were to keep it on, I would have to wear it at all times.
He was very gracious. I never read the book I had to keep me preoccupied. There was a better book, the book of people. We human beings are part from God and we are expert at finding faults. I am challenged to see the good. I heard my voice say “kudos customer service.” I heard his eyes say thank you. 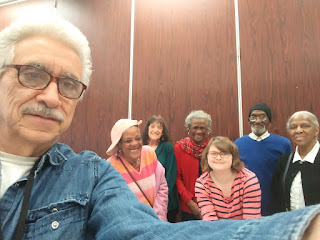 And we don’t fool around when it comes to ending senior isolation. Share your love for the older buds in your life by submitting their stories here: http://bit.ly/submit1000stories
And if you need a refresher on how to submit stories to “Joy Starts Here,” check out this handy-dandy link: http://bestdayofmylifesofar.org/joystartshere/
And don’t forget to check out the stories from our Philadelphia-based sister group Center in the Park. They’ve got lots of amazing stories, so check them out.
Curated by Caitlin Cieri
Newer Post Older Post Home