The older buds of Best Day are always eager to get to their workshops and events, and even more eager to stay afterwards to catch up with friends. Unfortunately, things happen that keep them from coming and staying as they please. Some of them have doctors appointments, others have broken heaters, some have unexpected family issues, and others still are held up by public transit. Some older buds are completely reliant on SEPTA's Customized Community Transportation, or CCT, which has a bad habit of picking up riders far too early or way too late. And if you don't come when you're called, they just drive off. Many older buds get mixed up in these scheduling kerfuffles, but we're sure you won't lose track of your favorite writers.

I knew you days were numbered. You lay bedridden in that horrible hospital and when I
came to visit you barely recognized me your son of 43 years. You knew that my love
for you was steadfast, never failing through thick and thin.
Still, you knew your time on earth was ending and so I did too. You left the hospital only to

return quickly.  And return I did to your side, your cheeks were pale, your legs weak, so much so that you could barely venture to the bathroom. Your head gray, gray from life’s trials and tribulation. Yes, I knew that time, your time was winding down. I held your hand and kissed you good-bye not knowing how many days remained

Eugene Charrington
03.21.2019
Professor Gates and Me – Something in Common

One spring morning in 1970, I unlocked the door and entered into the house I had and had just purchased, in the Fern Rock section of Philadelphia, Pennsylvania, on the G.I. Bill. Before I could close the door, a policeman entered and demanded an explanation for my being on the premise. I explained that I had just purchased the house and was awaiting the arrival of a utility person. To solidify my claim, I produced the deed to the home. In spite of my explanation and evidence that proved that I was the owner of the property, I was taken to jail, where I spent three hours before being released.
In 2009, approximately 39 years after the incident that occurred above, renowned Harvard University professor, Dr. Henry Louis Gates, attempted to enter his home in Cambridge, Massachusetts, but disconnecting a jammed doorknob. A neighbor reported a burglary. The Cambridge Police Department intervened. Gates was arrested and booked. The arrest created controversy throughout the nation. President Obama contended that the arrest was stupid, and that Latinos and African Americans were arrested disapportionately in America. He received criticism for his statement by law enforcement agencies throughout the U.S.A. When I heard about the incident, I was not shocked.
I could relate to his predicament, understand his frustration with the United States criminal justice system. My deed was not proof of home ownership. And Professor Gates whose credentials speak for themselves proved that prejudice in this nation was alive. Gates was an honored scholar, but his color placed him in a profiling category. Harvard’s campus has hosted numerous prejudicial episodes over the years. The Gates incident just happened to reach national proportions.

An article entitled, “The Arrest of Henry Louis Gates,” by Mark Lineman in the Atlantic Magazine on August 12, 2010, stated that he had interviewed a Caucasian woman in Cambridge, Massachusetts who claimed she had gotten assistance from a Cambridge officer when she had locked herself out of her home. Arresting office, Crowley, who had conducted Sensitivity Training Seminars throughout the New England area for ten years, evidently did not practice what he preached. Professor Gates and I were arrested for being in the wrong neighborhood while being Black. But we both had a right – property ownership – to be where we were.

I was older than my older brother by 9 months. My youngest brothers, he was two and a half years younger. We called ourselves the three musketeers.
Everything my brothers did, I tried to do it better. I played bottle tops, cowboys and Indians, jumping over the roof of tops of houses, jumping from the school tower, racing, etc. etc.
Wresting and boxing was out because that was a contact sport. They would show me how to box by posing me in the position and telling me where and how to hit them.
One day my older brother sprayed me with a water gun. I became very angry because I had just gotten my hair done and it was slightly wet from the water gun. In return I threw a soda can at my brother.
In those days, I played a dual part.  Earlier part of the day I was a tomboy, and in the afternoon I was Miss Prissy Prissy. I wore dresses and played girly games. I think the water gun put things into perspective for me. Two weeks later I overheard my brother jokingly say, “Well Eddy, I guess we lost our big brother.”

The bus I usually take (40) on South Street stops at the corner of where I live. With construction, that seems like it began ages ago at 23rd and South, the bus is now detoured to Pine and 21st for me.
Today, as I was seconds from the stop on Pine Street, I saw the bus pass, now I knew a long wait would be in store for me. I thought maybe in the next 15 minutes another bus would be there. Finally, after waiting long time, I hauled a cab. As soon as I entered the cab, I noticed the seats were soiled, and the floor was dirty. I told the driver about the condition of the passenger seating and the dirty floor. His remark was that it was because the previous rider caused the dirty condition. I replied that this was an accumulation of trash, not left by one passenger.
I was disappointed that I didn’t get the driver’s number and that I gave him a tip. My tip should have been: “If you are driving people around, you need to check the condition of the cab when the passengers are riding.”
Today really made me appreciate the bus I usually take on South Street. 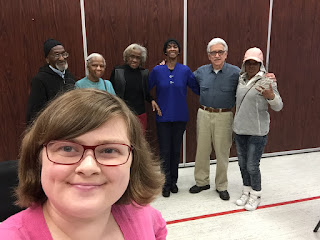 Don't lose track of the older buds in your life! Share your love for the older buds in your life by submitting their stories here: http://bit.ly/submit1000stories
And if you need a refresher on how to submit stories to “Joy Starts Here,” check out this handy-dandy link: http://bestdayofmylifesofar.org/joystartshere/
And don’t forget to check out the stories from our Philadelphia-based sister group Center in the Park. They’ve got lots of amazing stories, so check them out.