Good afternoon everyone. I hope you all had a Happy Mother’s Day this week. My mom had to work that morning, and I had an event to go to later that afternoon, but we managed to squeeze in some time together. In honor of this past Mother’s Day, I thought it’d be fun to go through the vaults and see what was written during Mothers’ Days past. 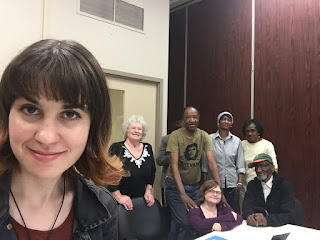 Frances Bryce
5.18.2017
Mother’s Day
The Friday before Mother’s Day, I had the strong feeling that my daughter was going to surprise me with a visit, she lives in California. Nothing she had said led me to this innate feeling, maybe because I had not gotten a card by Saturday which was unusual and no flowers had arrived.
Sunday came, no daughter or flowers arrived. I received a call wanting to know if the flowers arrived. We were both disappointed. She (my daughter) was very upset that she had been assured that the deliver was to have been made by Saturday.
The day was not lost, my lifetime friend’s son and his wife are like my biological
children, had a present for me, as well as their mom. We decided not to go out for dinner on Mother’s Day. One of the busiest times for Mom’s to eat out and not get the best of services.
I learned that sometimes strong feeling does not always come to fruition.

Hazel Nurse
5.9.2013
Mother’s Best Day
They say that truth is stranger than fiction. Maybe that is why I look forward to this wonderful class each Thursday.
It is such a privilege to share our joys, concerns, and experiences, not only with
senior members, but also with Caitlin, Donnell and many other collegiate friends who volunteer their services too.
Several years ago, with the approaching Mother’s Day, my husband and I planned a lavish Sunday for my mother. First and foremost was a lavish breakfast followed by a church service and later a dinner at a fine restaurant with our family members.
However, Mom arrived early and when my husband said, “Mrs. Palmer, this is your day! What would you like to do?” She replied, “Alvin, I’d like to go fishing!” We packed a lunch and spend the entire day with her fishing at Grist Mill. She caught a ton of fish too.

Loretta Dotson
5.21.2015
Planets
Some thoughts to ponder. Is there life on other planets? Have or has aliens landed? I really don’t know if there are little green men or big pink ladies or purple pampered children or could they be invisible? Wouldn’t it be amazing if they do exist here and could transform to look and are like us? Does your floor creak in the middle of the night? Do your lights flicker? Does your door bell ring and no one is there? Who turned off the T.V.? Who put the dish cloth in the refrigerator? Is your pipe missing?
Is your ice cream slowly disappearing? Maybe the kids are telling the truth and they did not touch your stuff. If not them, then who?
E.T. and family perhaps.

I hope you enjoyed the reads, and I hope you all have several Happy Mothers’ Days for years to come.
Curated by Caitlin Cieri