One of the things I like about Best Day is how hearing other people read their stories can spark an engaging, workshop-wide conversation! After everybody read their stories, one of the older buds, just remembered something from her own life. Frances, Joan, Delores, Eugene and I got to talking, and before we knew it we were talking about the controversy with Facebook, school shooters, screen time, subliminal suggestion, changing standards of safety, parties they didn’t go to as kids, parties they wouldn’t let their kids go to...and out of that came three brand-new stories from Joan and Delores.
I didn’t get the chance to write them down or record them, because I was that engaged in the conversation. But next time I’ll ask them to write them down for us to put online. 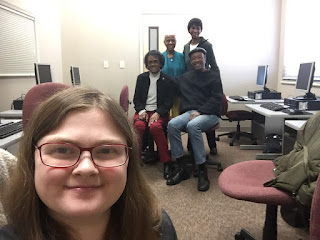 (Note: This story changes in tone halfway through, since it was written over the course of two weeks.)

I was working twelve hours a day and four hours a day on weekends. I’d be so tired that I’d come straight home and fall asleep. Sometimes, I’d have fallen asleep in the bath tub and my wife would have to put me in bed. Rich people don’t know about that. Sure, they lose money, but they’ve got friends to take them in and raise them up. But when I got out of school I had to go straight to work. And I worked before I even got in middle school. I was shining shoes and working the paper stand. And then, wouldn’t you believe the conditions where I was living in 7th and Lombard. It’s called Society Hill, but when I lived there, we had one room and a kitchen. We had a cot in the kitchen, we would have to flip up to go to sleep.
You see, these rich people that have no idea what it was like to have real hardship, to live like that. But I don’t regret it because it thought me how to fight. Not physically, but mentally, to grab what I needed.
I used to carry coal and wood. I worked in the wood cellar, and that was an after-school job going around selling baskets of coal and wood. Because back in the day, people had what I used to call coal ovens. And the coal and wood were for the ovens at night. And people had to do what I call “baking it off.” First, they’d light up the stove with wood, then they’d add coal and overnight they would “bank it off” by turning the damper so the coal burnt slower; so it would burn all night and keep the house warm. And that way, you could heat up water in a pot over the stove overnight, so you could wash up before school with warm water. Nowadays, you can get warm water straight from the faucet, but back then, that was the only way to get warm water.
I also sold shopping bags for a nickel to shoppers at the Italian Market. On a weekend, I could make two dollars and I could even get tips by carrying shoppers bags to their cars. And two dollars wasn’t nothing to sneeze at! You could go to the movies for just ten cents. Nowadays, everything got more expensive. There’s no such thing as penny candy anymore. And the bags I sold used to be just paper bags. There were no plastic bags then, but there’s only plastic bags now. Everything’s plastic nowadays, even the bottles. They used to be glass and that was another way I made money back then. I would collect empty bottles and return them to the corner store or any store where those products were sold. There were deposits on those bottles back then. The stores who sold those products would pay you 2 cents for each empty bottle. And beer bottles! I sold a lot of beer bottles! Five cents for a quart bottle and 12 ounces was 2 cents. They didn’t have 16 ounces back then.
Back in the day, any kid who was inclined to could make enough money to buy tickets to the movies or sneakers. Like I said, movies only cost a dime and I could buy a new pair of sneakers for $4.95. You could actually get a new suit for $27.95. I don’t know why they always put up sold things for something – ninety-five or something ninety-nine, but everyone was doing it back then. And a new haircut was 25 cents and if you went to Barb Devine, it would be 10 or 15 cents.
And that’s about it.

It’s true what they say, You can learn a lot by listening.
Curated by Caitlin Cieri
Newer Post Older Post Home