Seniors for Seniors (Elliot and Brenda)

Last Friday, I had the honor of being invited to the Philadelphia Senior Center’s Volunteer Appreciation Luncheon. I didn’t work for the senior center proper, so I took this as an opportunity to get a better feel for the senior center. The first thing I learned is that all the meals at the center are cooked on the premises; an incredible feat! 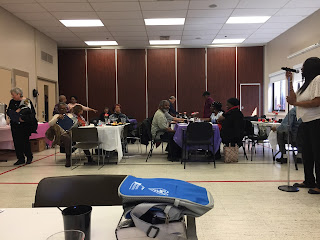 The second thing I learned is that most of the volunteers at the senior center are seniors themselves. I know the older buds of Best Day are self-sufficient enough to run a session on their own, but I was floored by the scope of volunteers. One of them was older bud Brenda, who runs another workshop at another senior center. Another older bud gave a speech about how she learned English as a second language as a child and decided to pay it forward by teaching ESL to the Coffee Cup members. There was even a cafeteria worker, Lepy, belting out “My Girl” by The Temptations; he had the most beautiful voice. 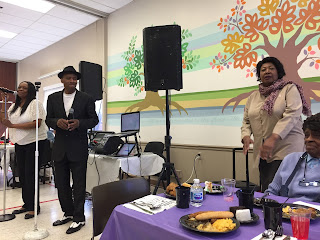 As a non-senior myself, I’m left in an odd position. On one hand, it’s a bit sad that seniors were the ones who usually volunteered at the center. I’m afraid people will assume the older buds have it all handled and use that as an excuse to ignore them. On the other hand, I don’t want to rob them of their agency. The older buds are grown ups, not children, and they don’t need anyone to cut their meat for them, so to speak.* The reality of old age is that there are things you can do, and things you can’t do; and most non-seniors can’t tell the difference. 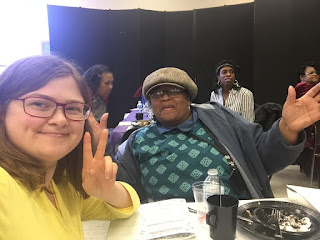 Elliot Doomes
1.18.2018
(Don’t) Trust Your Doctor
I’m just fighting this battle to not lose confidence in doctors. One time I told my doctor I was allergic to penicillin so he gave me ampicillin. And I took it because I didn’t know it was a mixture with penicillin. I was young and I was almost 21 and you didn’t question doctors. It was unheard of. We didn’t question doctors because we didn’t seem them that often. We got sick we usually just got well. We usually just had some remedies. Some neighbors would see something’s wrong with you and they’d give you all sorts of home remedies and old wives tales. Eventually, one of them worked. So I took it and then I went to work. A half hour later I was wet all over sweating from head to toe. My boss told me to go home because he didn’t want me dying in the station.
Then I went to another doctor and I told him about this. So he asked me what he gave me and I said, “Ampicillin.” And then he asked if my other doctor knew I was allergic to penicillin and I said “Yes.” Then he said, “Your doctor didn’t prescribe this to you!” And he dropped it in the trash can. Yes, he did.

I grew up in Harlem on West 117th Street. I lived right down the street from my elementary school; P.S. 184.
I remember the Snow Days when school was closed. Sometimes there was at least (24) twenty-four inches of snow. My friends and I would meet in the schoolyard and divide up into teams…we had a big snowball fight. There were lots of snowballs made and stockpiled so that we could beat the opposing team. Sometimes, we would look for trashcans and use the covers for shields. We also shoveled the snow to make embankments for protection! Sometimes hours would pas before we would tire.
At the end of the battle, the losing team had to cough up $ money to buy candy for everyone!
Ah… Ah! Those were the days. The times I remember, when we were young and carefree.

The important thing about working with any group is that every single member of the group is an individual person. You can’t use the same practices on every single person. Some people need transcription for their stories, and some can take dictation. Don’t disrespect them by following a script and refusing to make changes. 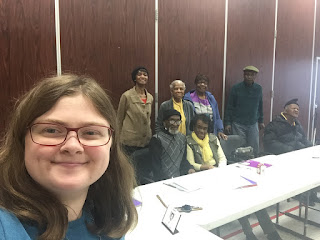 *There are a small number of blind people at the senior center, and volunteers do offer to organize their food for them. The point is, the older buds don’t need to be babied.
Curated by Caitlin Cieri