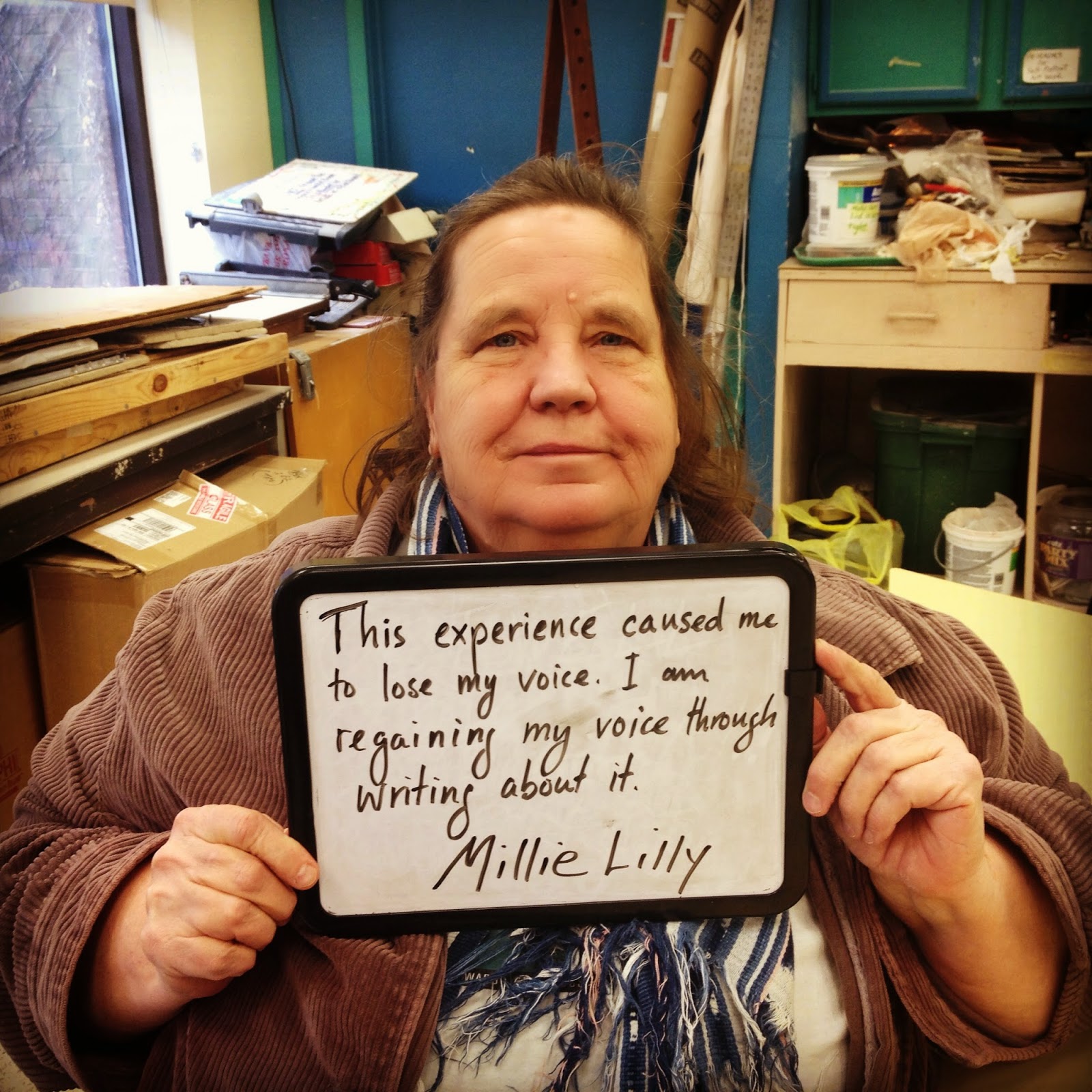 This may be the heaviest set of stories I have ever posted - and over the years I have posted some heavy ones. After every session for several weeks now, Millie and I stayed after class to chat about what she had written. Every week, I could see a greater strength and happiness in her eyes. The Thursday before last, she said something spontaneously which stuck with me (and will probably always stick with me), and this Thursday she wrote it down for me and let me take a picture, so we can both remember it, word for word, spoken in her voice.

After showing Millie this picture on my phone, we looked at each other and I cried tears of joy. The weight lifted by this picture is heavier than mountains.

If there is anything you would like me to pass onto Millie, please post it as a Facebook comment or send me a personal email at benita@bestdayofmylifesofar.org. If you are going through any struggles, past or present, of your own, I hope that Millie’s stories offer you the motivation you have been waiting for, to confront your struggles in some way.

The cold and snow have limited my ability to get out as much as usual.  I am one of many who really struggle with the conditions.

A lot of my time was spent in cold climates.  When I was four and a half years old, my Air Force family moved to St. John’s Island, Newfoundland.  My older sister, younger brother, father, and pregnant mother lived in a house at the top of a hill.  We lived in the basement without a refrigerator.  The family who owned the house lived upstairs.  They had a son.

The wind blew off the frozen water bringing icy cold along with the sounds of the seals being clubbed to death in the early morning.  My father tells me the seals sounded just like babies crying.

I don’t think there was much thinking about the effects of hearing that crying on the adults or young children.

Newfoundland was a harsh place in many ways.  Some countries sent people they no longer wanted.  Surely some of those people did nothing to deserve it.

One of the hardest things about being far from S. Carolina was being away from my Grandmother. When she looked at me I could tell she loved me and I always felt safe with her.

St. John’s Island, Newfoundland was a long way from my nanny. I believe she would have seen something was going on that neither of my parents could see. My mother was pregnant with 3 children under the age of 6 years old. She didn’t have much time nor was she inclined to encourage her children to talk to her. My father was hungry for an older man to pay attention to him. The man who owned the house lived upstairs from our basement apartment and was more than willing to play the part of the older man in my father’s life.

Harold was his name. His wife and son Tommy – who was around eight – lived with him. They were from England. It turns out Newfoundland was a hot bed of pedophiles. People expelled from their country of origin…

I sat on the ground playing so it must have been during the summer I turned five years old.  The ground would have been too cold any other time of the year.

Harold had been telling me how if I told anyone what he was doing to me, the police would do worse things to me.  Even at five years old, I knew he was jerking me around, but I couldn’t hold on to it enough to figure out to get help.

Harold was always thinking of ways to drive home I couldn’t tell anyone.  He was afraid about my father and my sister who was a year and a half older.  He knew I didn’t have a voice with my mother.  He never worried about me telling her.  He would threaten me with telling her I had done something wrong whenever he wanted to force me to do something.  When the baby was born dead, he said more people would die if I told.

I had no memory of what happened to me in Newfoundland until my early forties. I was almost 16 when we left Alaska for Grand Forks, North Dakota. I was a junior in high school and was sad about leaving friends and a place I felt I belonged. North Dakota was cold, with the extra added feature of wind that cut through you like a knife. Only small trees and soil that was dry and dusty. Potato land.
I remember standing in the living room listening to my mother crying and reading a letter that had taken a long time to catch up to us. It was from Harold’s wife, saying that he had died after an illness, and he had suffered much. I had no memory of the horrible things he had done to me.
Still, I thought: Good. Good. Good.