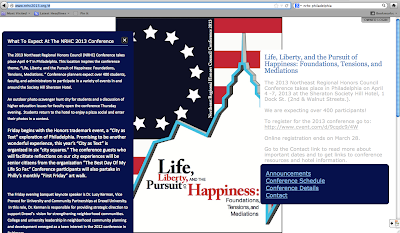 Next week is a big one for us, and we’re getting excited!

Our seniors will be the featured guests and keynote speakers at a major regional intergenerational conference: The 2013 Northeast Regional Honors Council (NRHC) Conference, co-hosted by La Salle University and held at the Society Hill Sheraton Hotel.

Over 400 students, faculty, administrators from different colleges and cities will be gathering in our City of Brotherly Love for the weekend. For the conference’s tradmark event on Friday, “City as Text,” attendees will be listening to our seniors' personal stories about Philadelphia’s past and present, while sharing their research on the city. Conference details can be found Here.

A big thank you to Rich, Pres, and everyone at La Salle, and Lori and the entire NRHC Executive Board, for inviting our seniors to participate in an event that means so much to your university and organization.

And a big welcome to all the honor students, faculty, administrators, who are on your way here!!! I think a few stories about Philadelphia are in order, don’t you? See you soon! Our seniors are REALLY looking forward to meeting you guys!

As a young married couple, my husband and I moved to the 1900 block of North Patton Street.  We were among the first to integrate this block and were not very welcomed by our “other” neighbors.

It was October 1956 and we were in our early to mid twenties and had one three year old daughter, Karen.

As the years went by more young families had moved in and by the mid 1960s, we were all of “the darker persuasion”.  There were many, many children and everyone seemed happy and interested in each other’s welfare.

Our children played together and went to school and in some cases went to church together.

Parents didn’t just take their children on trips.  They would ask permission and take some of the neighbor’s children with them.
It wasn’t unusual for us to count an extra head or two at the dinner table because the children knew they were welcomed.  We even had the responsibility of taking neighbors’ children to and from school.

Now, we have at least four generations of children on our block and they have renamed our street “Patton Street Village”.

Our street is just one block long but the surrounding blocks love to participate in all the activities that we have.

I am so proud of Patton Street Village.

The area with 52nd St and Market St in the middle was known as the Strip. It had 5 movie theaters and the Horn and Hardart automatic restaurant. When you put in nickels, dimes, and quarters in the slots you could reach behind windows for bowls of incredibly delicious baked beans, home fried potatoes, macaroni and cheese, apple pie pumpkin pie and lemon meringue pie. Also ice cream and hot chocolate.

On Friday and Saturday nights there would be double features of older movies which didn’t play in the suburbs. This was before most people had television so it was worth taking the train to a station at 52nd St and Lancaster Avenue, walk down about 100 or 200 steps to the street and switch to the 52 trolley car to get to Market St. To us it was like going to Las Vegas today, but in 9th grade.

From the age of eight years old to the age of seventeen, I lived in a small street called Opal Street.  It’s spelled Opal as in the gem but it was always pronounced O-pal Street.

In the summer during vacation lots of children from surrounding neighborhoods would come to Opal Street to play.  During the morning through early afternoon we played wallball, three flies, step baseball, play fish, knuckles, jacks, marbles, deadman block, cowboys and Indians, double dutch, and we made our own scooters or the original skateboards.  We’d get a wooden crate, some old rollerskates, a hammer and nails and get to work.

Every afternoon everyone would disappear and show up again around five or six o’clock after we’d taken a bath and had eaten our dinner.
Then the circle games would begin.  We played Down By the Green Apple Tree and Who Stole the Cookie from the Cookie Jar.

Sometimes the waterplug would be turned on as late as twelve and one o’clock at night.  The adults would be sitting on the steps watching the young people play.

We call or consider those the good old days, but today are good days as well.
I thank God for those wonderful times and wonderful memories.  Also thank God that He has kept us with these never forgotten memories.

These were the sincere words of May Ann Holiday, my next door neighbor, classmate, and play sister.

Her testament (as baby boomer) echoed my sentiments exactly.  We were raised during a period where a surreal cohesiveness actually existed in the nation in a neighborhood where its occupants (Mary Ann and I resided) were poor but happier than fold with money today.

We made our toys; we were imaginative in our play activity; we created clubs; we told jokes, asked riddles, and recited bouncy chants.

And there was much more that we did… my mind, lately, has been focused on the group of guys that I associated with and the institutes that keep us busy.

Our major path was 43rd street in West Philadelphia, between Lancaster Ave (a vast business area) and Haverford Ave (Where Drexel University had a huge field).

There were three movies on Lancaster Avenue, my church was a block south on Aspen Street, and there was a YMCA a half block away… then there was a pharmacy on Fairmount Avenue where you could get floats and ice cream sodas mixed up by white coat soda jerks.

A block away – on the borders of Haverford Avenue, there was Saint Ingatius Catholic Church where we played softball, attended bingo games, dances, and skating parties.

We would sneak over the Drexel University football stadium wall on Haverford on Sundays and would have 22 guys pound each almost to death… in a good way.

So like Mary Ann, I am happy that I was born a baby-boomer and I am happy I was raised in the Mill Creek section of West Philly.


Aileen Jefferson
3.8.2012
A New Perception of the Earth / Philadelphia

Oh happiness! I am in Philadelphia but it is a new Philly. I hear new bird song. I’m listening to a wealth of new sounds or vibrations. A feeling of excitement; where am I? A new abode, new sensations with the same charming harmony. My own peaceful sanctuary achieved by my own wit and industry.