Bernice (On the Bus) 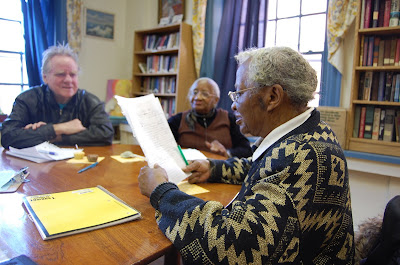 What’s better than a superhero? An undercover one!

I’ve been saving up a lil’ something for you guys… a mini story series!! So basically, around September, Bernice started telling our group all these things that would happen to her on the way to the senior center. We’d go crazy over her stories and keep requesting more. I mean, here Bernice is, with her cane – she cannot walk long distances and needs help going up and down the stairs – and we’d hear about her fighting crime and helping crying women on a regular basis on the bus. And she doesn’t tell these stories with a bragging tone or anything like that. She tells these with real innocence. Kind of like, people need help, she’s helping – why not?

Plus, (in case you are newer to the blog and haven’t read her previous stories) Bernice is hilarious. She is hands-down the funniest person I know. So you gotta imagine this, while she’s reading these stories (which carry giant morals about justice and community, you know), she’d start laughing at herself between sentences!

What’s better than an undercover superwoman? One who is SUPER-fun to be around!

Today, coming down on the bus, I saw a lady get sick.  She was taken to the hospital.  I hope she is alright.  Some people helped her until help arrived.  I sure hope she is alright.  When I was walking down 11th and Market Streets, a little boy came out of the store.  His mother was still in the store. I told him he was with the wrong mother – my baby boy is 60 year old. I was just passing through. So I stopped and looked into the store.  His mother was glad to see that he was alright.  Sometimes children get away, and their mother and father don’t see it.  I was glad everything was ok.

I was on the No. 15 bus this morning. Some people speak and some don’t.  A lady left her purse on the bus.  I see her all the time, and I told her about it.  She was glad I gave it to her.  One lady said I should have kept it.  I don’t believe in keeping something that ain’t mine.  It is so good to be honest.

Another lady fell asleep on the bus.  A man tried to take her purse.  I woke her up.  He was mad at me.  I did not care about that.  It is good to help people.  There are some very mean people.  I am glad I am not one of them.

The older we get, the more we see new things.  Everything has changed.  There are a lot of new people here.  We have to get used to them.  I love to see new people and make things change for the best.

I ride the bus everyday.  A lady on the bus gave me a dollar for a cup of coffee.  I thanked her but I told her I did not need it.  She said I was a nice person and she sees me all the time.  A lot of new people ride the No. 5 bus, all going different places.  Some people are very mean.  A lady on the bus was praying.  Three school kids was making fun of her.  I told them it was not nice to act like that.  They said they was sorry and went on their way.

It is nice to see children act in a nice way.

A lady got on the bus.  She could not walk too well.  The bus was packed at the front of the bus.  It is for handicap people but there are people who don’t care.  He had to tell them about it.

A lady dropped her purse.  It had a lot of money in it.  I picked it up and gave it to her.  She wanted to give me some money.  But, I said no.  I only hope others would do the same.

There are a lot of street people everywhere.  A lot of them do not know where to go.  I sometimes tell them there is always hope and care.  Sometimes we must give up on ourselves for God is the head doctor as long as we believe in him.  We will always be alright.  It is good to be happy and care about other people.

This morning, I was on the number 5 Bus. A lady fell trying to get on the bus, and the bus driver stopped the bus and helped her.

Another lady with a baby got on the bus. She was crying because her husband has left her and a lady on the bus told her where to go for help. I also told her of a place.

It was so sad when you see so many people need help. The way I see it, no one should give up on themselves. There are so many places where you can get help. There are good days and bad days. People should not give up. A lot of people are ashamed to talk about their troubles, but it is good for them to let someone know.

People also should keep up their good work and help others. Don’t forget, the Lord is a head doctor and prayer is the best thing.

Another lady lost her bag .  I told her a lady took it to the bus station.  A man was lost. He was on the wrong bus. The weather was cold.  It is good to get on a warm bus.

Some buses are cold.  It is good to see smiling faces.  The holidays are here again. Thanksgiving and Christmas and New Year will be here soon.  We have lost a lot of friends here.  But it is good to meet new people and it goes on and on.