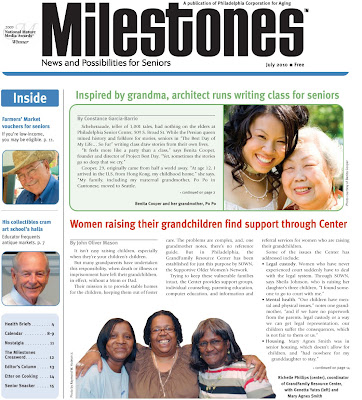 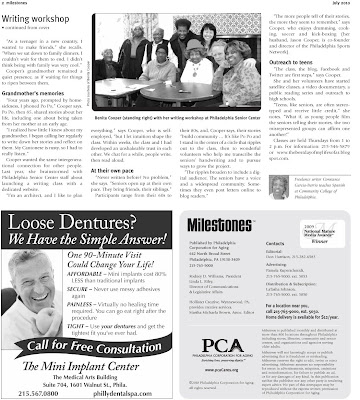 It’s official. We HEART P.A.! Just found out we are on the front page of another local paper: Milestones Newspaper July issue. If you live in town, pick up a free copy at your sidewalk newsstand anytime this month – and pick up an extra one to share with a friend!

Pennsylvania oh Pennsylvania, how can we thank you enough… except with stories? Here are Hattie and Mo talking about how the streets of our fantastic state have transformed over the years. Consider this blog post our mini token of appreciation for all of your support.

(And to all our out-of-town readers, by now I hope you know: You Rock. You’re like one giant worldwide cheering squad that keeps our seniors writing. They write because you are reading. Cheer on! Rock on!)

As a young married couple, my husband and I moved to the 1900 block of North Patton Street.  We were among the first to integrate this block and were not very welcomed by our “other” neighbors.

It was October 1956 and we were in our early to mid twenties and had one three year old daughter, Karen.

As the years went by more young families had moved in and by the mid 1960s, we were all of “the darker persuasion”.  There were many, many children and everyone seemed happy and interested in each other’s welfare.
Our children played together and went to school and in some cases went to church together.

Parents didn’t just take their children on trips.  They would ask permission and take some of the neighbor’s children with them.

It wasn’t unusual for us to count an extra head or two at the dinner table because the children knew they were welcomed.  We even had the responsibility of taking neighbors’ children to and from school.

Now, we have at least four generations of children on our block and they have renamed our street “Patton Street Village”.

Our street is just one block long but the surrounding blocks love to participate in all the activities that we have.

I am so proud of Patton Street Village.

The town bus went to 69th Street Terminal which we later learned was in Upper Darby, Delaware County, Pa.  There were five movies we could walk to.  We usually went to two.  One high school boy tried to see all five many days.

There was a White Tower with little hamburgers, soup cups of baked beans and French fries.  Nobody wasted money on sodas when we could see a movie or have a meal.  We kept the bus fare in our secret pockets or rings.

No adults ever came with us and there was never any trouble I can remember.

When we were 16 or so we went to Irish dances on top of some stores between the movie theaters.  Some of my older friends met their wives at those dances.  Tom Connell, one of my idols - a few years older, brought his shy, Jewish friend.  At least five of my Italian friends came with me.  The Irish girls loved them.  Anthony E. Horre met his wife there.  Most of us just liked to pound our feet on the thin floor during the “Irish Sets” which were like square dances.