We're in the Philadelphia Inquirer!

Check out today’s Philadelphia Inquirer… we’re in it!
Click Here for the Article

I wish I could articulate how honored I feel at this moment, but I am still processing my feelings – I am just so happy. (Thank you Dianna for your kind words.) It’s still 5:45 am Seattle time… just can’t wait to call my grandma in a few more hours, and get to class this Thursday and show the seniors the newspaper.

And readers … I have something to admit, yes, the seniors, volunteers and I knew about this in advance. But we wanted to be tight-lipped about it to keep this a surprise for you! Thank you for reading.

And new readers who are seeing this blog for the first time – thanks for checking us out, and hop on board. It’s been a fun ride, and it’s just begun. 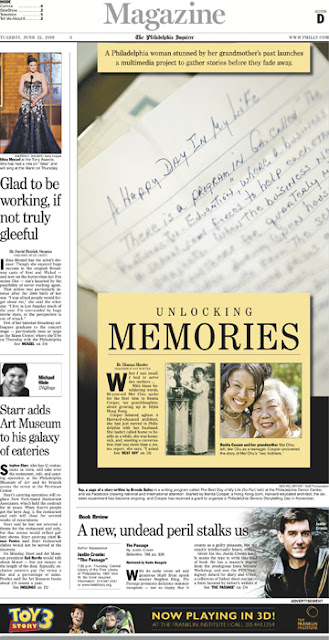 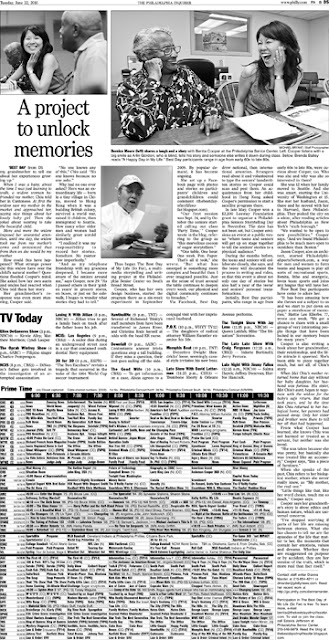 With these bewildering words, 85-year-old Mei Chiu spoke for the first time to Benita Cooper, her granddaughter, about growing up in 1930s Hong Kong.
Cooper listened, aghast. A Harvard-educated architect, she had just moved to Philadelphia with her husband. She hadn't called home to Seattle in a while, she was homesick, and, wanting a conversation that was more than a status report, she says, "I asked my grandmother to tell me about her experiences growing up."

When I was a baby, about the time I was just learning to walk, a widow woman befriended my mother, Chiu told her in Cantonese. At first the widow saw my mother in the market and approached her, saying nice things about her lovely baby girl. Then she joked about wanting to take the beautiful child.
More and more the widow imposed her unwanted attention, until one day, the widow took me from my mother's arms and announced that from then on she would be my mother.

How could this have happened? What strange power did this widow have over the child's natural mother? Questions flooded Cooper's mind. She asked how her own aunts and uncles had reacted when Chiu told them her story.

Her grandmother's response was even more stunning, Cooper said.

Why had no one ever asked? Hers was an extraordinary life - born in a tiny village in China, moved to Hong Kong when it was a budding British colony, survived a world war, raised 11 children, then immigrated to Seattle. How many other older men and women had similarly great untold histories?

"I realized it was my responsibility to record her stories. Somehow. No matter how imperfectly."

"And as my telephone friendship with my grandma deepened, I became more aware of the seniors around me," says Cooper, now 29. "As I passed others in their 'golden years' in grocery stores, on buses, or just on the sidewalk, I began to wonder what stories they had to tell."

Thus began The Best Day of My Life (So Far), a multimedia storytelling and writing project at the Philadelphia Senior Center on South Broad Street.

Cooper, who has her own design business, started the program there as a six-week experiment in September 2009. By popular demand, it has become ongoing.

She set up a Facebook page with photos and stories so participants' children and grandchildren could comment (thebestdayofmylifesofar.blogspot.com).

"Our first session was Sept. 24, and by October the seniors started calling our class 'Party Time,' " Cooper wrote in the blog, referring to the group as "this marvelous cocoon of eager storytellers."

"One table. One hour. One week. Pen. Paper. That's all it took," she wrote. "But what has emerged is something more complex and beautiful than I ever imagined possible. Just as the sense of trust around the table continues to deepen every week, our physical and digital community continues to broaden."

Via Facebook, Best Day drew national, then international attention. Strangers read about it and volunteered to type the seniors' handwritten stories so Cooper could scan and post them. An acquaintance from her childhood in Hong Kong asked Cooper's permission to start a satellite program there.

In late May, Cooper won a $2,500 Leeway Foundation grant to organize a Philadelphia Seniors Storytelling Day in November. The date has not been set, but Cooper envisions an event at a public venue "where teens and seniors will get up on stage together to tell the seniors' stories to a physical audience."

During the months before, the teens and seniors will collaborate closely, she says, and the teens will document the process in writing and video, so that this event is about not only one day of stories but also half a year of the teens' and seniors' personal transformations.

Initially, Best Day participants, who range in age from early 60s to late 80s, were curious about Cooper, too. Who was she and why was she so interested in them?

She was 12 when her family moved to Seattle. And she was smart, starting the University of Washington at 15. She met her husband, Jason, there and he moved with her to Harvard, then Philadelphia. They picked the city on a whim, after reading articles about Philadelphia as New York's "sixth borough."

"We wanted to be open to new possibilities," Cooper says. "And we found Philadelphia to be much more open to outsiders than Boston."

Jason Cooper, also an architect, started PhiladelphiaSportsNetwork.com, a way for men and women to form teams and leagues to play all sorts of recreational sports. Benita, lithe and energetic, loves team sports and joins any league that will have her.

Now Best Day participants have come to adore her.

"It has been amazing how she throws out a subject to us and we start to put down on paper a storehouse of memories," Hattie Lee Ellerbe, 77, wrote one week. "We get a chance to share with a small group of very interesting people things that have been locked in our memory boxes for many years."

Cooper is also writing a book about her grandmother, their relationship, and the little miracle it spawned. She's been able to piece together much, but not all, of Chiu's story.

When Mei Chiu's mother returned home that day without her baby daughter, her husband was furious. His sister, Mei Chiu's aunt, began to negotiate with the widow for the baby's safe return. But that took years, and by the time Mei Chiu returned to her biological home, her parents had passed away. Only her sister and brother were there to tell her all that had happened.

From what Cooper has learned, she knows Chiu was not harmed or treated as a servant, but neither was she loved.

"She was taken because she was pretty, but basically she was treated like an accessory," Cooper says, "like a piece of furniture."

When she speaks of the past, Chiu refers to her biological mother, whom she never really knew, as "My mother, the real one."

Cooper says her grandmother's story is about ethics and human nature, which are universal concerns.
"I've stopped worrying if parts of her life are missing between stories. What she has chosen to tell me are the episodes of the life that matter to her, the moments that contain her emotions, values and dreams. Whether they are exaggerated on purpose or by accident, they are her version of the truth, which is more real than fact itself."