Coming up next is the eighteenth part to Diane Richardson’s “When I Met My Hubby.” But first, the seasons are shifting.

I blinked and Diwali was over. Halloween was hard to miss, and Día de Muertos came on its heels. While looking through stories for today's post, I remembered Gloria seeing ads for Christmas movies in the middle of October. I also missed two weeks of posts due to my own madcap schedule, so I'm getting back on the horse while it's still running. Diane's story reflects the rapidly shifting schedule, and José's story reflects a classic Halloween tradition:

This is not a scary story, not an adventure trip, just a nosy 15 years old adolescent mingling with the power and trickery of the “prince of darkness.” My aunt's house was the most inappropriate place to do that kind of irreverence but we didn’t mind, for us it was only a play. The house was build according to a Spanish tradition where rooms were lined up in a square and communicated in between; all of them with a door to the central patio. I was sharing my rented room with Victor, my brother, and our furniture consisted in two beds and one small bureau in between … well, it's also necessary to say that there was a large color old lithography of Jesus Christ hanging on the wall as a permanent guardian or permanent intruder according to the circumstances. That night after dinner we gather in our room with the presence of Antonio, another tenant, Jorge Cordova, a neighbor friend and another guy who whose name I can’t recall. Jorge invited us to participate in a levitation session; “nothing serious” according to him. We agree and warned the group to be quiet since my aunt was super sensitive and super aggressive. He explained the procedure and at the same time we followed his instructions. “Ok, I need one volunteer to lay on bed with his crossed arms in the chest, motionless until we finish, and not to be surprised if he is risen.” Antonio accepted as volunteer and we started following Jorge instructions. I switch off the light and were distributed; two persons by each Antonio’s side. Then Jorge explained, “First we are going to do an experiment. Using your thumb and index of each hand we are going to rise Antonio, ready...one…two…three, up it goes!” Antonio was risen only a few inches, his body weight was not evenly distributed so the legs went higher than his trunk and head. “Ok,” said Jorge, “Now I’m going to utter something to José and he will repeat the same message to Victor and he to the fourth. Then, I will say something different and you will do the repetition person to person. Ok? Let’s begin, put your fingers in position.”
With low but clear voice he pronounced to my ear: “Este es un muerto ” (this is a corpse) and each of us passed to the rest the messages: “Ya apesta” (It stinks), “Pesado como un metal” (Heavy as a metal). “Ligero como una pluma”(ligth as a feather). “Vamos a levantarlo” (Let’s rise him). “En El hombre sea del Diablo”(In the name of the devil) and voilà Antonio went high up to our shoulders.
In that precise moment my aunt erupted screaming saying, “This is a Catholic house and you want to turn it in a devil’s cave. Shame on you, stop your sacrilegious play and repent.” Antonio fell down so strenuously that he only managed to say: “Who is screaming as Hell?” 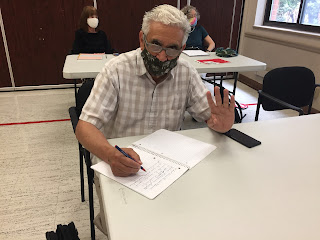 We now return to our continuing story, "When I Met My Hubby, Part 18" by Diane Richardson:

When I Met My Husband Part 18

I hope you all remember my last story on 7.19 where I told the story of the female inmate at a prison getting assaulted by a male prison guard. The guard was fired and arrested after all the tapes were pulled and viewed and after threats to my safety, I left the assignment. I sure miss the two hundred dollars a carton I used to get from one particular inmate. I still go to their clubs and restaurants on occasion. They appreciated me looking out for their loved ones. I still had people looking out for them after I was gone. They are all out now or transferred to another person.
If you remember my friend and coworker married the cigarette guy, we’ll call Al. They live in a lovely condo around the corner from me across from the Art Museum. They are living large and we sometimes dine together.
So getting back to Joe, his knee has been bothering him so I suggested he go see his new Dr.’s I recommended him to. Dr. Quintialani and DeSalvo. They suggested that he have arthroscopic surgery (same day procedure.) He had the surgery, and they gave him a note to return to work in six months, with pay. He went back to work two days later. The note wasn’t accepted so he had to go back to the Dr. and get the note reversed so he could return to work. They changed the note but told Joe it was against his better judgment. Who wouldn’t want to be out of work for half a year with pay? Him. Talking about loving your job. I’m not looking forward to his retirement. 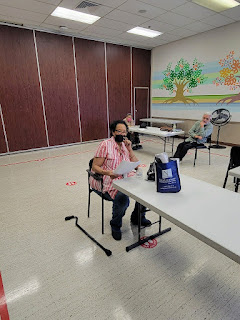 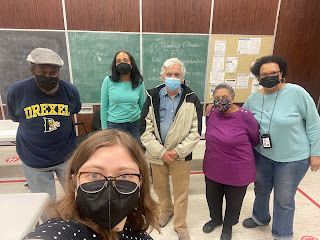