Coming up next is the sixteenth part to Diane Richardson’s “When I Met My Hubby.” But first, a change of pace and a change of place.

Deborah came to visit last Tuesday, and she got to finally meet older but Chong in person. Also, older bud Chong returned to her second class and is looking to be a regular now. It's always a joy when the new people become regulars. You may have also noticed that the room in this week's photos is slightly familiar yet slightly different from the room in last week's photos. That's because we've moved back into our old room! So in honor of the change in space/pace, I'm sharing a story from older bud Ann, which segues nicely into Diane's latest story:

The summer of 1967 was known as the summer of love or more specifically the summer of sex, drugs and rock and roll. Hippies converged from Haight Ashbury to New York's Greenwich Village. Music exploded with sounds of Jimi Hendrix The Doors, Jefferson Airplane and Janis Joplin. That summer I was 15, between my sophomore and junior year of high school. I lived in a small, conservative, middle class town but even there both girls and guys were growing their hair to never before seen lengths. We all sported bell bottom jean, tie dyed tee shirts, love beads and peace sign jewelry.
While I can't speak for all my classmates, sex and drugs had not yet happened in my immediate circle of friends; but Rock and Roll was definitely our soundtrack of the summer. I think every guy in high school was in a newly formed rock back, often giving impromptu concerts from their open garage door on hot summer nights. But as I said my friends were mostly 15 or 16 and in New Jersey you couldn't get a drivers license until you were 17, meaning our weeknight summer social life was pretty much non existent. We wanted a place where our high school bands could play and we could dance and socialize a couple of nights a week. So we decided to make that happen.
Our high school took in four towns so there were plenty of temples and churches with rental halls that seemed the most likely candidate. After several no's with finally got a yes from the Community Church of Harrington Park, which I am proud to say happened to be the church where I received my Sunday school education. The minister loved the idea and promptly put the youth minister in charge. For lack of a better term we called it the Coffee House Project.
Of course there were many details to be worked out, but the most pressing was finding furniture since the church only had those big old long banquet tables and hard folding chairs. Fortunately for us a year earlier a very expensive Italian restaurant had very suddenly been abandoned and deserted by its now vanished owners who left all its contents behind. Now the restaurant was in the northern New Jersey town of Northvale well known for its mafia connections. In fact years later the bowling alley scenes in the Sopranos were filmed at the Northvale bowling alley lanes. So I'm just saying the vanishing restaurant wasn't that hard to explain.
Anyway, the youth minister got in touch with Northvale police who agreed to meet us at that abandoned restaurant tear down the police tape, unboard the doors and windows, and allowed us to take whatever furniture we wanted under their supervision. I had never again witnessed such a haunted real life scene. Between the cobwebs there were stained linen napkins and tablecloths still on the tables, empty bottles of wine, random silverware and plates on the floor, busboy stands with half filled trays, discarded high heel shoes and coats and hats still in the coat closet. Apparently it was a very quick getaway.
So now we had our place, our furniture and our youth minister sponsor. We formed committees to figure out details which briefly ended up being the following: we were open from 8 to 11 on Tuesday and Thursday night. We scheduled those local garage bands weekly who were thrilled to play for free. It cost $2.00 to get in and that money went towards replenishing our food offerings consisting of soda, potato chips and pretzels, which was ironic since we once called ourselves the Coffee House; or to be more specific we had chosen the name Ultra Coffee House. Of course there were other rules and the youth minister and his wife discreetly monitored our behavior from afar. But all in all we were a huge success often turning people away.
I have fond memories of dancing with both girls and guys to songs like Light My Fire, Foxy Lady, Wild Thing, and Sitting By the Dock of the Bay. I smiled a lot during that summer of 1967. 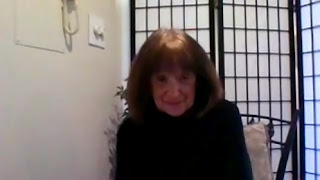 We now return to our continuing story, "When I Met My Hubby, Part 16" by Diane Richardson:

Diane Richardson
07.12.2022
When I Met My Hubby Part 16
So, I’m currently assigned to Philadelphia Industrial Correctional Center on State Road. A prison, and I work in the Medical Clinic taking care of the inmate’s medical needs. And they were so appreciative of us and thanked us all the time. Since they banned smoking in jails and prisons, the inmates would complain how they were dying for a drink and a smoke.
One of my favorite patients, an Italian mobster, asked me if I would consider smuggling in some cigarettes. He offered to pay me $200 a carton. I could have the money sent to me or I could pick it up. And he asked my co-worker Charlene to smuggle in liquor. These guys were Italian mobsters, and the money was nothing for them. They wanted what they wanted at whatever cost. They have been drinking and smoking all their lived and the withdrawal was killing them. They would do anything for a drink and a smoke.
I smuggled in two cartons of cigarettes at two hundred a carton. He would send the money to whoever I wanted it to be sent or I could pick it up. The choice was mine. My co-worker Charlene would smuggle in the liquor. These inmates owned several businesses, bars, clubs, restaurants etc. They would insist that I patronize their establishments on a regular basis and bring all my friends. They were so appreciative of me making their family members lives’ a little more comfortable and enjoyable. They couldn’t thank us enough. One establishment owner offered his catering services for Joe and I’s wedding for free.
I would sometimes bring my daughters, Tara, and Tia. They don’t like hanging out with old people, so I mostly took Pearlie Mae and her sisters. Joe never wanted to go so I just brought him a bunch of food home. My co-worker Charlene fell in love with one of the inmates. Charlene is the one that smuggles in the alcohol. Her and Al fell in love. She would call down for Al to come up for his blood pressure check. They would be in the exam room for a long time. The guards knew what time it was, and what was going on. They got married upon his release. They had a big, fat, beautiful wedding and anybody who was anybody was there. They now live around the corner from me in a high rise across from the Art Museum.
To Be Continued..... 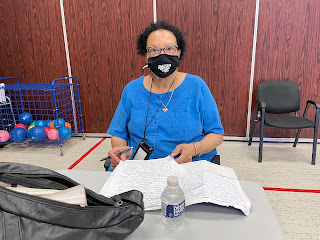 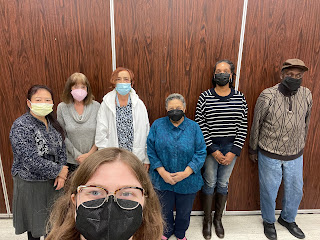