Coming up next is the tenth part to Diane Richardson's "When I Met My Hubby." But first, teachers.

A good teacher can mean the world to a person. They can inspire you to do better in life, they can literally save your life, or they can simply cheer you up after a bad day. But not all teachers are good, and not all students appreciate good teachers. Teaching is a job that involves handling rooms full of people for several hours at a time, and balancing that with the demands of their staff, school board, bosses, etc. Both of today's stories are about times when teachers don't have students like you'd see in "Dead Poet's Society."

About Discussing Seriously When Drinking

That summer of 1994 in the capital city of Chihuahua I was working for a GM factory. I was invited to reunite with my old law school classmates and some former professors. Several activities were organized like a visit to our old school building, a group photo, etc. all oriented to celebrate the opportunity to see us again together. After a fairly succulent dinner we move to a different room to continue our chattering; in the meanwhile, drinks were served at discretion. I was happily surprised to be among some of my dear schoolmates after so much time of absence. I was conversing with my friend José Manuel Aburto and with some others companions. I have to say that in the room there were four or five senior professors that I always remembered with respect. The theme I was discussing with José Manuel was about the purpose of education. It all started when my friend stated: “The idea in our Law studies is to know the law to serve the society.” I continue inquiring: “But most of us are not properly lawyers but businessmen, employees, bureaucrats, teachers and very few practitioners. So our studies habilitated us to be efficient interpreters and applicants of the law but not necessary seekers of justice, but highly skilled technicians willing to apply the law according to the customer interest.” José Manuel smiling told me: ”So, you are implicating that our law studies are not significantly related to our gains as professionals? Are you suggesting that our studies did not enable us to care for our society?” I answered: “I’m not the person to judge that so I can only speak for myself. I believe that I was a beneficiary of many social circumstances that gave me the advantage to study at a very high level. In that process my studies allowed me a very rich experience of life when I met all of you, my professors, etc. Yet, I have seen some higher educational systems that clearly define its purposes, for example the Tecnologico de Monterrey system is looking to educate future entrepreneurs. The Tecnologicos system are preparing vocational operators to serve mostly big corporations. But what I want to think hard is about how the future Law students can be inspired in a very different way.” José Manuel interrupted me asking: “Now that you are stating your preference for a different aim of education, please give your point, how the Law School education can improve its philosophical approach?” And I answered: “Well in general education has the aim of making the students more human. The law as Plato says has to make us better. Professors will help students by inspiring conscious actions guided by values, and moral scrupulous. But my experience is that I was trained to consume legal literature in order to apply it as a modus vivendi.” “That’s enough,” said José Manuel and grabbing me by the arm took me to the presence of professor Enrique Aguilar. He used to teach us the course of Obligations, a course oriented to infuse legal criteria to read and interpret the civil law and it’s very much related to motives and decision making that have legal consequences. It was one of the few courses that I found interesting. In those times he was very popular among students since he also lectured courses at the high school level and many of the law students took those courses with him. Those teachings were influenced by his Marxist orientation and he navigated as a leader and model for a new just society were work exploitation will be abolished. In addition, he was a very good-looking guy and an accomplished public speaker. Now Manuel confronted me with him and openly asked me: “Can you repeat to Mr. Aguilar what you just told me about education?” I had to organize my ideas since some colleagues surrounded us supposing something interesting was going to happen. I explained about my experience and how my opinion is that the curricula and the teacher approach had to be more oriented to human development and moral maturity; I ended with a plea for courses to facilitate students to be social leaders. Mr. Aguilar spoke with his pompous orator voice directly to me: “You are completely wrong, as far as leadership facilitation you have had the privilege to be student of some of the most accomplished leaders and professors of the state and I can add… from the country...” and he later mentioned a list of the academia. Regretting the inappropriate circumstances for such discussion as soon as I had a chance distanced from him and continued the chatting, avoiding getting into more trouble; who wants trouble in the middle of a drinking session? I remembered the saying “If you drink, don’t drive” and I applied to this case I would say: “If you drink, don’t start serious discussions.” 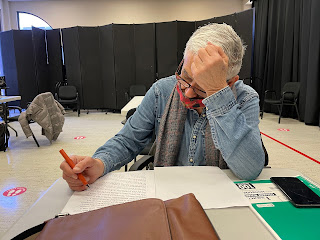 We now return to our continuing story, "When I Met My Hubby" by Diane Richardson Part 10:

When I Met My Hubby Part 10

So, at this time I’m on assignment at the Occupational Medicine Department at the University of Penn Hospital. This department has contracts with several companies in case of an employee accident or injury. The employee that got injured on the job reports to our Dept. for treatment and or therapy. This day I have an employee of the Phila. School District, a male teacher who got assaulted by a male student at a high school. The student was angry at the teacher for giving a failing grade where he could no longer be on the football team. The large male student caught the teacher at the marble staircase, picked the teacher up and threw him down the stairs. The teacher was brought to the hospital at my department, Occupational Medicine. Where he was treated and released.
The student was arrested, After the incident the teacher was continuously threatened and harassed to not press charges and testify in court. His car often damaged and tires flattened by the students. He told me this when he came for therapy. He said according to his contract he could not transfer to another school until the contract was up and the trial was over, and there were no witnesses to anyone doing the damage to his vehicle, or threats to him and he had no names of the students who threatened him.
In other words, he just had to “Deal with It.” Finally, he was permitted to transfer to a different school. The student was found guilty and expelled from school.
To Be Continued… 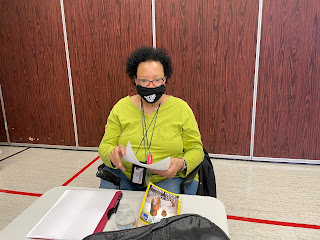