I just remember South Street when they had the festival and they had the tables and chairs in the middle of South Street, and they closed South Street down during the summer. I don’t know if that’s an annual event, but I remember when my husband was in the last legs of his cancer and he lost his appetite. And so, we went to South Street and they had this wonderful barbecue restaurant on the corner.
The smell, oh the aroma would just turn your stomach into knots, and he didn’t have any appetite at all. And he hadn’t eaten any really good, substantial food in a whole week or so because the chemo had taken his appetite away. So, we went over and the guy that was behind the counter gave us an order of these delicious barbecue spareribs and fries. The restaurant’s not even there on the corner, I think it was around 7th or 8th or somewhere around there.
We sat at the table with some tourists and my husband started eating these spareribs and talking about how good they were and the smell of them and everything. And I was just about congratulating him and had tears of joy to watch him eat this food that he hadn’t eaten in so long. These people that were from Sweden, I was clapping my hands, and they said “Why are you so happy?” and I told them. And as he got up everybody at the table got up and cheered him because he was finally eating some food. 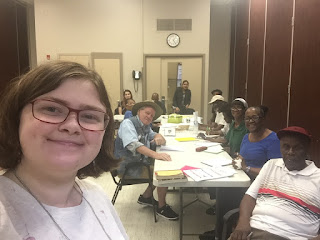 Something I Want to Say

I have something I want to say about all of the things that’s going on that we certainly can’t ignore. That it happened and people are still demonstrating. And sometimes I think I want to talk about people who don’t understand or know about Black culture and what is happening with the Black men in our society. And as a mother of a Black young man when I saw that cop with his knee on his neck, I immediately thought about my son, about my nephews about my husband and about all of the people.
And then when the peaceful march started and there was some looting or something and then the emphasis seemed to have shifted to the effect and not the cause of all of this thing. So when you don’t know a culture about a people and you find out they are angry, and also there’s always an element who’s there for the ride, I call it, no matter what you’re doing.
I had the experience when I was working where these two young women, two Caucasian women, who whenever there was any unrest, they lived out in the suburbs, and they came in because it was sort of a thing to do. And I’m sure your going to find that element. But that’s not what I want to emphasize in this case. I want to emphasize the pain the race has undergone since slavery and still goes on. I’ll just give one example that hasn’t been that long ago.
My husband who was working for General Electric at the time, a scientist, he was a scientist. They were converting algae to methane gas and then he was going to be interviewed. The person from the news station came in to interview him and then a Caucasian man came in right after that. The interviewer interviewed both of them, and the guys sort of responded. My husband who had told me about the interview that was going to take place and I was excited to see it. When he came in he said “The interview I gave is on the floor” and the only thing we saw was him diving off the back of the boat and white guy, who was an employee of my husband, was the person that gave all of the information and was the interviewee. So those are the kind of things that go on.
Some years ago when my husband was at GE in Valley Forge and there was a department store, and we were waiting to be served. And just how you could be ignored. I was there, and maybe three other people were there, all of Whom were not Black. And the girl who came up to serve, instead of asking who’s next, she went right over to my white brothers and sisters. And I said, “I was next” and the white guy waiting apologized. It wasn’t his fault. It was how you automatically discard another person and go for what is comfortable to you.
And I’ll just give you another example of how all these things accumulate over time. This isn’t the worst part; He was never beaten or all that kind of stuff. In a workplace where you are a professional and you should have as much weight as anybody else and then he was working with another company that wanted to do some business with GE and this white guy came up and he wasn’t going to talk to him because he was Black. So GE had to say, if you’re going to business with my company you have to do this business with him. So think about how that affects your mental and ability to be a person and a man in this world. So those are the types of things I wanted to explain.
So, the other part I just thought that maybe if white people who are joined in this demonstration, especially young people, they are always the ones who change things. If they could make an effort to meet a Black person, and even volunteer to do some work in some of the schools that are not served, then they can continue being involved with the people they’re demonstrating with. Those are the things that I thought might be relevant for people who don’t know about the pain and suffering over years of the people who have been stopped by cops, when you didn’t have a camera, and they do anything and that was it. I want the people to keep in mind and think about the cause of why these things happen. See, Black folks already know about white people, but seldom do a lot of white folks have a friend or an acquaintance where they can talk about any issue. Get to know the other people who are in your world. 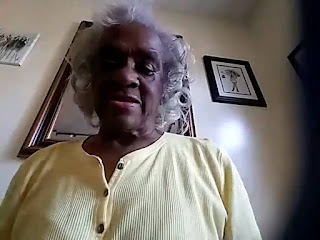 Last year I wrote about Vanessa, my sister Ellen’s long-time pen pal from England who came to visit our family in 1968 when she and Ellen were both 18. A quick synopsis—Vanessa was charming, engaging, funny, generous, and always ready for a good time. We too her to a Broadway play, toured Washington DC and went to her first baseball game where she loudly rooted for Willie Mays (on the Giants team) while wearing a Yankees baseball cap and her first pair of cut-off denim shorts. Though she seemed totally unaware of it, she was also a stunning, head turning natural beauty who often caused teenage boys in the neighborhood to be momentarily speechless.
By the time her 2-week visit was over we had fallen in love with her and shared a tearful airport departure as she wiped hear tears and promised to come back again. And now, Part 2: Vanessa did indeed come back 5 years later accompanied by her new husband, John. John was the male version of Vanessa, sharing both her personality and her good looks. Now it was the teenage girls, myself included, who were often speechless in his presence.
John perfected his impressions of American accents, taking on the personas of Elvis Pressley and Richard Nixon. He also became addicted to Dunkin Donuts which had not yet invaded the British Isles. He often took an early morning walk returning with a large box of “Dunkies” as he called them.
Both John and Vanessa were lifelong Londoners and followed the Royal Family with awe, interest and respect. Princess Ann’s wedding was happening during their visit, so Vanessa asked my parents if she and John could quietly watch the 5am live televised wedding in the living room while the rest of us slept. Of course, my mom said yes. That morning my mom and I got up before John and Vanessa and decorated the living room with streamers and paper wedding bells. She prepared Earl Grey tea in the China tea pot that Vanessa had given her and prepared cream cheese tea sandwiches—along with a plate of Dunkies, of course.
A surprised and happy Vanessa and John came into the living room followed by my drowsy father and sister. We placed paper crowns on everyone’s head and settled in to watch the proceedings. John and Vanessa were glued to the screen while sipping tea and frequently saying things like lovely, beautiful and wonderful. We Americans however sat snuggled under a comforter trying to stay awake. When it was finally over, my father popped a bottle of champagne and we toasted the wedding of people I had never heard of as dawn finally broke.
Their visit went by quickly and once again we found ourselves sobbing at the airport departure gate. Vanessa again promised they would return, and they did—which will be the subject of a future story. 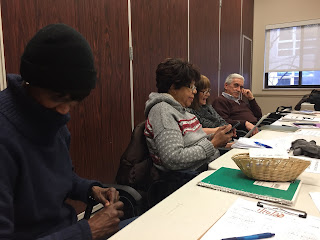 If you want to transcribe for Best Day, then email us at info@bestdayofmylifesofar.org. You can also share our older buds' adventures by donating to Best Day, subscribing to our newsletter, sending a note to our older buds, or following us on Facebook, Instagram, and Twitter. And if you or the older buds have stories about America's history, then you or they can submit stories through our portal right here. We're especially interested to stories from Black older buds, but we're always looking for stories from older buds of color, older buds with disabilities, LGBTQIA+ older buds, older buds of any gender or sex, older buds of any religion, and older buds who just plain break the mold.
And don't forget to maintain contact with the older buds in your life. If you can't be there in person, please call them, email them, or message them on social media. And if they're using teleconferencing or remote events for the first time, give them a call and help them set things up. Check in on them to see how well they're getting used to these programs. Buy them a computer or an internet package if they don't have one of their own. It's a human right, after all. 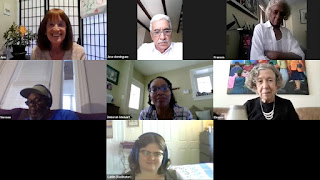