Telling stories on Zoom is very different than telling stories in person. That's why I'm so proud of our transcribers for being able to turn our Zoom sessions into typed stories for our website. They have to contend with different qualities of microphones, internet delays, Zoom's habit of cutting out the first second of a person's speech, and not being able to see some older buds' faces. The biggest challenge for our newest transcribers is that they've never met our storytellers in person. Depending on the Coronavirus' infection rates and our cities' regulations, they might not be able to meet them in person for months. 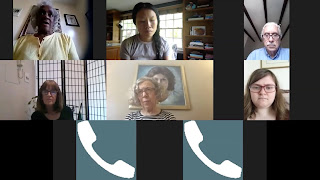 When you work with people in person, you hear their voices and learn their prosody, and your brain can fill in the blanks on Zoom. I'm fortunate enough to have Norman's phone number, since one of the transcribers couldn't hear some of the names in his story. I texted him about the names and how to spell them, and I learned two things:
1. I hadn't even realized I'd spelled Zillie's wrong until I asked Norman how to spell something completely different.
2. There was a lot more to the story. 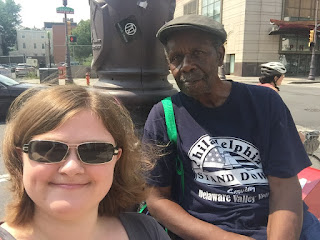 So this week's blog post is Norman's story about the restaurant he misses the most, and Gullah Geechee cooking culture, along with the extra notes he sent me via text:

Each year I would go to South Carolina as a child, and I would always enjoy having lunch and dinner at Miss Zillie’s Restaurant which was located in Pamplico, South Carolina, a tobacco warehouse town. And that particular restaurant was in “fresh grow season” the fresh slaughtered fowl and animals from the nearby farms; the workers from the nearby tobacco warehouses would come and eat.
And then on Saturdays when folks came in to enjoy the half-a-day that they would have off from their sharecropping activities, they would gather at Miss Zillie’s Restaurant. Miss Zillie was the sister of my father’s brother’s wife. And she would come down with her children and help in Miss Zillie’s restaurant.
Years later my aunt’s son Dan Junior, who was my first cousin, worked at a restaurant in Philadelphia that was the premier restaurant some 15 or 20 years ago, and had about a good 10-to-15 year run and it was called Mama Rosa’s Restaurant. They had several food trucks out, they were caterers and their main restaurant was very large, it was a very large parking lot was located in Broad and Huntington Park. The facility was large enough to have birthday parties, wedding receptions, etc, and at one time the Temple radio station would operate directly from there.
Now, each New Year’s for perhaps the last 50 to 55 years my aunt who was the sister of Miss Zillie down in Pamplico, South Carolina would have (and I just went to one this past New Year’s) she would always have a New Year’s dinner. And Mama Rosa’s, the premier soul food restaurant in Philadelphia, Mr and Mrs Ritter, that’s what their names were, would come to that New Year’s dinner, and I thought it was ironic that two culinary folk would gather together. It was like fate bringing them together.
Now, one of the things in my research that I found out was that there was a lady who died recently and her name was Vertamae Smart-Grosvenor. She was a culinary anthropologist, food writer and world traveler, and an actress. And she was best known for a cookbook that she wrote which was entitled “Vibration Cooking or The Travel Notes of a Geechee Girl”. Now, ironically my aunt and Mama Rosa’s folks were considered anthropology as being of the Geechee folk that were brought as slaves from West Africa and settled on the islands and coast from Cape Fair, North Carolina throughout Jacksonville, Florida. And with them they kept the same kind of culinary skills, the foods and whatnot and the way of preparing the food.
So that’s my story, how the South Carolina Geechee Culinary Reunion always took place for a lot of years at my aunt’s annual New Year’s Eve dinner.


Norman: At one point the MaMa Rosa restaurant Enterprise had several food trucks, and restaurants. The restaurant at Broad and Huntington Park was the largest. Their restaurant organization crease d to exist approximately 15 to 20 years ago. It was a Phila institution.
I believe that I will have to expand the MaMa Rosa narrative. Initially, the father, whose name I have forgotten, was a pharmacist who had a drugstore in my neighbor. Long before the family went into the restaurant business I was friends with his daughter and two sons. One son made transition last year. I am still in contact with the two remaining siblings. When they started their restaurant endeavor, my first cousin, Dan, was hired. He was a great cook who received. his training at his aunts soul food restaurant in Pamplicio, South Carolina, when he spend his summers in that town. Dan became a great friend of the Ritter family. Once one of the sons accompanied Dan to Pamplicio S.C. , where he undoubtedly saw Zillies Restaurant.
Both families,the Cain's and the Ritter's trace those heritage to the South Carolina Lowlands,the area that encompass the Sea Islands and the coastal land adjacent the Atlantic Ocean. Slaves who were settled in the area maintained a large percentage of there African culture: religion, language, customs, food consumption and preparation.
Vertamae Smart Grosvenor, a close relative of the Ritter's, was an actress, lecturer, radio host and Culinary Anthropologist. She is best known for her cook book entitled: Vibration Cooking or, The Travel Notes of a Geechee Girl. Gullah Geechee is the name synonymous with South Carolina Lowland Afro Americans.
(Caitlin: Thanks!)
Norman: Just got your message. I would like to have the story placed on the blog. I feel a deep connection to how the story started in a drug store and eventually connected two
families (Gullah Geechee) who happen to be restaurant people, and through a cook book keep a Culinary culture alive

There's lots of ways to support older buds, both in and outside of Best Day. You can donate to Best Day, subscribe to our newsletter, send a note to our older buds, or follow us on Facebook, Instagram, and Twitter. If you want to volunteer yourself, then email us at  info@bestdayofmylifesofar.org. And if you know older buds with stories, then you or they can submit them through our portal right here. And don't forget to maintain contact with the older buds in your life. If you can't be there in person, please call them, email them, or message them on social media. And if they're using teleconferencing or remote events for the first time, give them a call and help them set things up. Check in on them to see how well they're getting used to these programs. Buy them a computer or an internet package if they don't have one of their own. It's a human right, after all.

Also, the photos of Norman and me in the great outdoors were taken years before COVID-19. We're being safe, wearing PPE, and staying six feet away. 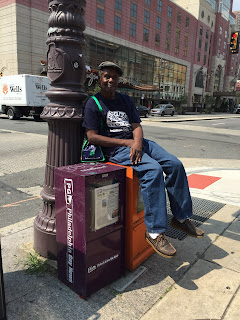