It's been three weeks since we've started our virtual Best Days, and things seem to be getting into a rhythm. The bad news is, Norman's still waiting for his computer, so we won't be able to see his handsome face for a while. The good news is Frances' Zoom worked, so we got to see her face! The better news is that Ann shared a story about how both her daughter and her grandson were featured on WXPN's own Kids Corner. And if you're not from the Philadelphia area, then you should know that that's a pretty big deal, and that Kathy O'Connell is basically the God of children's programming. Perhaps there will be some cross promotion in the future? 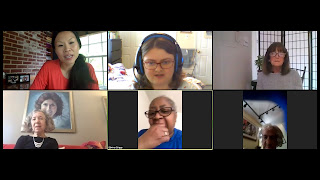 Before we get into the stories, I'd like to wish everyone a belated Happy Mother's Day and Happy Asian American and Pacific Islander Heritage Month. Especially since this was founded after our fearless leader Benita had a heartfelt conversation with her grandmother in Hong Kong. And in these crazy times, it's more important than ever to support Asian run businesses and Asian run non-profits. You can donate, subscribe to our newsletter, send a note to our older buds, or follow us on Facebook, Instagram, and Twitter. If you want to volunteer yourself, then email us at info@bestdayofmylifesofar.org. And if you know older buds with stories, then you or they can submit them through our portal right here.