Close Up (José and Frances)

We’re not quite done talking about our 10th Anniversary yet. Last week, ABC news came to Best Day, along with fearless leader Benita, to get some shots of our workshop and interviews with our older buds. They were especially interested in older buds Frances and Elliot, so don’t be surprised if you see them on TV. Also, older bud Ann was a bit nervous to be filmed, but once the workshop started it was like they weren’t even there. 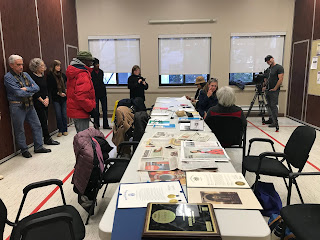 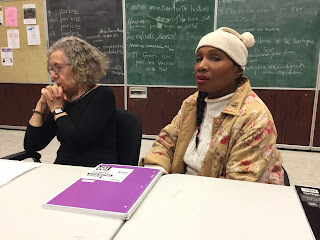 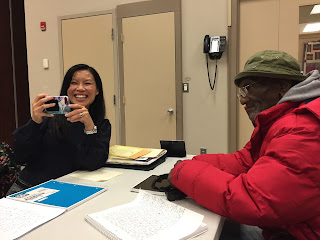 They even got footage of our Senior Selfie! And we got a picture of them getting video of us taking the senior selfie. Photo-ception! 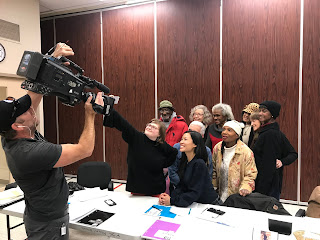 If you’re reading this in Philadelphia or its suburbs, we’ll be on Channel 6 ABC News. We’ll update you with the airtime when we get it. And for everyone else, we’ll post a link when the story appears online.

And here’s a couple of stories from a couple of older buds to hype you up for our on-screen appearance:

José Dominguez
05.23.2019
Everybody Has Different Tastes, I’m Correct?
I met Maria one December and [by] the next March, she was my girlfriend. I took her to meet my father – it was like a formal visit. It was a Sunday afternoon and my father was very gentle with her. He was not too expressive. After a few minutes, we departed from my father’s house.
The next day, when I had the opportunity to speak with my father, I asked his opinion about Maria. Very so solemnly, but cautiously, he responded, “My son, please do not be offended, it’s not my purpose, but in regard to your girlfriend, the only thing I can say is that I have a very different taste of woman, very different.” I thought that he didn’t like Maria as my girlfriend, but I did not mind. Years later, my son introduced me to his girlfriend. I thought, “I have a different taste of women,” when my daughter introduced her boyfriend. I thought Maria, my wife, has a very different taste of men, and finally I concluded my father was right, our dates in regard to selection of sexual partner are very different, for sure. I will not select a girl like my mother as a girlfriend, [and] my mother was my father’s choice and taste … my son and daughter did not select parters as me in the case of my daughter or as Maria in the case of my son. It is simply a taste difference and a personal choice, no big deal. 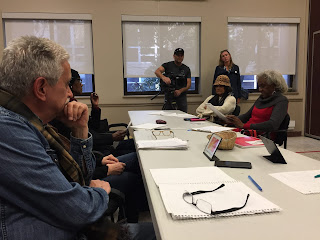 Frances Bryce
05.23.2019
Do You Have A Story To Tell?
I believe it’s safe to say that more of us experience a change of unrelated events that you do not have in your control, are very annoying, and have a tendency to last at length and could ruin our day if we give in to them.
I cite an incident of a friend who as arrived at our dance class we attended on time, but was very upset because she was left at a previous center that day when her driver came and left without her. Then to make matters worse for her, he was not coming back to pick [her up] and take her to the second center. Her choice was to take a bus to the dance class or wherever she was going on the last leg of her trip (the dance class). I listened and said, “I understand how annoyed you must feel, but not give power to this event which can’t be changed or reversed. So in the future, you may be able to prevent another time from happening.” I encouraged her to use this event as having a story to tell that you now have the inconvenience of having to take a bus, how much you think this driver should have made sure you were on the bus, etc. etc. [I said], “Now you have a story to tell. So let’s move forward, start dancing as you have been doing and enjoying for years,” which she did.
I told her about a planned trip my friend and I looked to visit some New England states. Her sister arranged our travel schedule since this was her business. When I arrived ay my first leg of the trip, I did not have a ticket for my final destination. I called my friend who was to meet me and informed that I was missing my last ticket. I figured the worst [thing] would be to buy another ticket and be reimbursed later.
The travel arranger (my friend’s sister) went right into action [and] arrangements were made with only a short delay. I went on my way. I arrived at my destination and my friend and I had a great time after she apologized for her sister’s error. Now, I too have a story to tell. The trip was wonderful and she, my dance friend, heard the story because of the snag in my travel. I chose to remember an unexpected incident that could not be reversed. She knew that after an unplanned detour did not ruin my trip. Enjoy a story to tell when it presents itself. 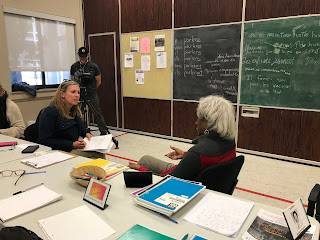 The festivities are over, but you can still contribute to our 10th Anniversary by donating here, or sending us stories here. We’re taking donations until the end of November, and we’ll take stories for as long as Best Day is around. Thanks for your continued support, and have a Happy Thanksgiving. 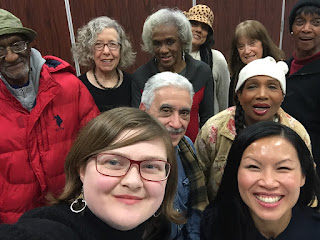