Remember two weeks ago when I mentioned a whole bunch of stories about school days during one of our sessions? I thought you might like to read these stories for yourself. Consider it your summer reading! And if you get through the whole blog by September first, you can reward yourself with a single-topping personal pan pizza from Pizza Hut* ;)

Seventh grade was a terrible year. My life seemed pretty uneventful until then. Junior high – a new school. Sudden interest in boys. Self-consciousness.
I found myself taller than almost everyone despite being a year younger. How I envied those cute short girls. My hair was unruly and frizzy. I put rollers in it trying to coax it into a flip. That was a flop.
I developed a whopping case of pimples.
And to top it all off, I was flat-chested. My mother assured me I would “grow” to be well-endowed like her. That never happened.
My mother also got it into her head that I had flat feet and needed orthopedic shoes. In the early 60s, people were obsessed with and terrified of flat feet. Actually, my feet were quite normal.
Well, I could go on and on about how awful that year was – pimples, flat chested, [and those] orthopedic shoes that I had under my desk.
My mother absolutely refused to let me get a bra and I wore undershirts. I felt embarrassed.
One day after school, I took my babysitting money, went to the Sears store near my house and bought a bra that I only needed for self-esteem.
My mother never said a word.
To this day, I am proud of that small act of rebellion.

The small town in South Carolina, Laurens, had a population at that time of approximately 10,000 people. Segregation was the rule. I to this date did not and still found it difficult to understand. Hard to imagine white and colored water faucets, fountains all the water from a common source. Black and colored bus stations. Everything that could be separated into white and colored, including restrooms at public places.
I attended school in the colored section of town. My high school was located outside the city. Each day I had to pass by a white high school, near where I lived to get to school.
My second year in high school, the building burned down. We attended school in a church until the school was rebuilt, this meant the new school was more modern than the white school with moveable seats, unlike the ones that was permanently anchored to the floor. The seats from the white high school were then forced to the new colored high school and the new seats were sent to the white high school. Other unbelievable occurrences happened like new uniforms for our high school was not bought and our old ones were from the high school (it didn’t matter that funds were siphoned off to the white high school and the colors were not the school colors of our school.
Living in the south had a lot of things that were positive, hospitality among the positive things. Neighbors were a very important part of my early life, which meant that we had to respect them as well as our parents.
At the end of legal segregation, one high school that everyone attends.

Caught up in the excitement of the US Women’s Soccer Team’s victory, I realized how greatly and positively things have changed for girls and women in sports. When I was in elementary school, long before Title 9 leveled the playing field, we had co-ed gym once a week. It was more like a structured recess than gym – we played a lot of dodgeball and had a lot of relay races. In 6th grade, however, we had separate girl/boy gym classes. Already the lines were drawn as boys had gym 3x a week and the girls had it twice a week. The boys were given t-shirts and gym shorts with the school’s initials on them and we girls were told to wear a shirt with shorts underneath on gym days. We were also given a very new, very young, very male gym teacher, known as Mr. B. I [doubt] if Mr. B’s dream job was teaching a group of 6th and 7th-grade hormonal girls, but it did mean certain advantages for us. For example, we had to “change” into our gym clothes behind the curtain on the stage in the gym. Now, remember “hanging” meant whipping off our shirts to expose our shorts, a move which should take less than 10 seconds. But given the fact that Mr. B was not allowed to step behind the curtain, we stretched the time out until we heard, “Girls, please come out,” then “Let’s go,” and finally, “Girls, NOW!” On days when one just didn’t feel like participating, she would go up to Mr. B and use the universal female excuse of “I have cramps.” After his blush faded, Mr. B would stammer, “Uh OK, uh just go over there and observe.”
Mr. B loved softball and we pretty much played it whenever the weather cooperated. Two of my friends and I often volunteered to play outfield because we enjoyed the peace and quiet, could talk about it, and even look for 4 leaf clovers since it was extremely rare for a ball to get past shortstop. Unless, unless, unless, Muriel stepped up to the plate. Muriel consistently hit over the fence homers (meaning we outfielders still didn’t have to work) and when she pitched, it was inevitably a “no-hitter.” Muriel was a very nice girl who was told “no” time after time when she asked to try out for little league. So finally, Muriel tucked her hair under a baseball cap, borrowed her brother’s clothes and went down to the field for little league tryouts, registering under a false name. No surprise, she hit 3 homers at her 3 at-bats and pitched a perfect inning. When the winning player’s names were announced at the end of tryouts, Muriel’s pseudo mane was of course amongst them. Having a flair for the dramatic, she walked up to home plate, pulled off her cap and shook her long mane of churls as the adults gasped and the kids cheered. In fairness, the adults got in touch with some little league executives but were told the bylaws strictly forbade females in a male sport.
Things improved for us girls in high school as we were exposed to a wider variety of sports. I really liked tennis and archery. There was a tennis team – for boys only – and an archery club for boys only. The only all-girl teams were gymnastics and cheerleading. But over the years, things did change and when my own girls were in high school, they played on the lacrosse team and field hockey team and the tennis team.
Slowly, the women’s tennis championship became more popular than men’s. Upon Women’s basketball team won 11 championships and 13 years own Mo’ne Davis propelled her Philadelphia team to the Little League World Championship.
During the victory parade for this year’s women’s soccer team, co-captain Megan Rapinoe popped the cork on a bottle of champagne trouncing, “I deserve this – we all deserve this!” Yes, they do, but they also deserve to win their next battle – equal pay.


Don't just save the storytelling for the summertime. Our tenth anniversary celebration is coming up during the school year on Friday November 8th, 10AM-4PM. You can donate here, and groups of students and families (home-schooled or otherwise) can get special rewards for contributing. If you have stories to share from the older buds in your life, please send them through this form.  I myself have posted stories about about targets, guns, potatoes, stubborn babies, and one about the Rocky Horror Picture Show. If you're uncomfortable with the idea of playing hooky, then don't worry because it's a great learning experience and volunteering opportunity. If you are comfortable with the idea of playing hooky, then stick it to The Man by shedding light on a population that's typically ignored. Fight the power! 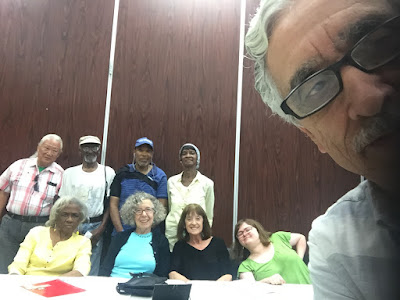 As for our senior selfie...José volunteered to take it, but his camera wasn't working. It looked like he had a permanent Instagram filter, and not even the good kind. So he borrowed mine, but my phone case slid around over the camera. So now it's another, different Instagram filter** ;)