A conversation with the older buds will often take interesting terms. For instance, last week we were talking between stories, and the conversation turned to Southern hospitality, i.e. if you go down South, you will get fed. Whether you want it or not, the food is inevitable.
Norman knew it, Frances knew it, Elliot knew it. Joan wasn’t from the South and never went, but one of her foster mothers was from Georgia and she was the best cook Joan had ever met. José never quite had Southern hospitality, but he had a lot of Mexican hospitality. He even said the best places to find it are the small towns far away from the major cities like Mexico City and El Paso. Delores said that when she went to New York, she saw two different types of hospitality in New York “among people of [her] color.” If you went to their house for a party, and they came from the South, they would feed you. If they were born and raised in New York, then you could drink all the liquor they had, but they wouldn’t feed you. Ann said the New Yorkers she knew would feed you, but they were typically Italian-American. I’ll be going down to Atlanta, Georgia myself in a few weeks, so I’m looking forward to a little Southern hospitality myself.

Speaking of hospitality, our tenth anniversary celebration is coming up during the school year on Friday November 8th, 10AM-4PM. You can donate here, and groups of students and families (home-schooled or otherwise) can get special rewards for contributing. If you have stories to share from the older buds in your life, please send them through this form.  I myself have posted stories about about targets, guns, potatoes, stubborn babies, and one about the Rocky Horror Picture Show. If you're uncomfortable with the idea of playing hooky, then don't worry because it's a great learning experience and volunteering opportunity. If you are comfortable with the idea of playing hooky, then stick it to The Man by shedding light on a population that's typically ignored. Fight the power!

And in the spirit of hospitality, we have a sampler of stories for you to enjoy.

A couple of weeks ago the sun came out and the daffodils peeped its head hoping that they would make a grand entrance. The weather again decided that it had not made its first debut, so the flowers were again on hold.
The past week the weather gave us another treat by bringing warmth more days. The tulips, daffodils and pansies were again on display, along with others. Macy’s had a flower show that was beautiful, and gave me an opportunity to see what we have in store, to look forward in planters if you are limited to a small space.
The calendar says spring is here and now the flowers are catching up with the anxious expectations of what's to come.
We will get to put away the wool scarves, heavy coats and hats, so enjoy whatever the thermometer reads. Also, after spring comes summer, no complaining about the hot weather.

Rochelle Tynes
4.9.2015
Because I ask so many Questions

Preventatives and Preservatives - Does anyone remember being given different remedies or patented medicines for a given time of year? Such as, in the Spring we got a syrup and molasses tonic to clean us out from the Winter Blahs. In the Fall, Winter and other times we got a dose of Castor Oil, Cod Liver Oil, Father John’s or Turpentine on top of something in a spoon. We were given Paregoric and Afetas bags to wear and other items to prevent us having various illnesses. However we usually felt so yucky and smelled so bad from the bags around our necks that no one within a 50 foot radius would come near us unless they had on the same bag. Were these remedies a preventative or a preservative? When we talk among ourselves and relate our experiences of having taken or being given these items we really be grateful because we are still standing. They seem to have been preservatives as well as preventatives. 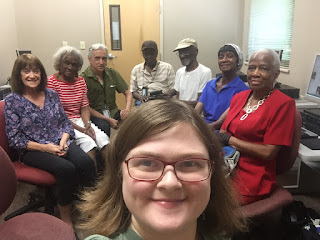 Thanks for reading, and take care of yourself.
Curated by Caitlin Cieri
Newer Post Older Post Home