I mentioned last week that I’m bringing Best Day buds to The Moth, and a few of them went to a Moth Story Slam on Monday. The thing about Moth shows is that they’re so popular that their online tickets will sell out in an hour. I knew that I couldn’t expect the older buds to camp out in front of their computers until 12PM and beat everyone else to ticket sales. I can’t even expect myself to do that. But I also knew that the Moth always had extra tickets for sale the day of...if you come early enough.

I went to the Moth and found Delores there, first in line. She even bought an extra ticket for her friend Gwen. Ann and Rochelle got caught in traffic, so they had to put their names on a wait list. That was because I remembered to save them seats, but completely forgot to save them tickets.

In the end, everybody got in and everybody got to see the story slam. None of the older buds got picked to see the show, but they all loved the other storytellers, and were eager to go again...when the weather’s warmer and the days are longer that is.

Even though Delores, Rochelle and Ann didn’t go onstage, you can still enjoy their stories on our blog below:

A friend of mine made a remark about grandchildren calling their grandparents by their first name. Even when the honor of grand was initiated before saying their first name. I was not offended by her remark. It actually reinforced my practice of not comparing myself to others and not being judgmental before time. I realized I didn’t don’t know the back-story. I have a set of grandchildren that are twin boys. When they were toddlers, me and their mother’s mother would take them on outings. I learned and observed them. I could when they were addressing me or the other grandmother. She would answer when they were actually speaking to me. I could see the frustration on their faces when they would politely say, “I’m talking to my other grand-mom.” I didn’t want to start confusion between my son the twin’s mother. I made the decision that the boys could call me “Grand-Mom Delores.” I didn’t like that personally at the time, but it seems to be the solution. 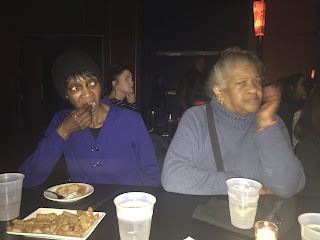 So very often anymore, we hear unfavorable things about and in regards to our youth, both girls and boys.

We hear how they are loud, disrespectful to all around them, including their peers, how they dress, the girls look like hoochy mamas, the boys have to show everyone their underwear and cuss as well as smoke some God awful smelling substances that lingers in the air for quite a while after they pass by.

We also hear about them talking loudly on cell phones as well as not being careful of where they are walking when they are on these phones. But every once in a while, one of them will amaze me and do something thoughtful and kind. Tuesday night, when I put my trash out, I dropped my recycle can. A young boy was passing by, he picked my recycle trash up and set my container on the curb. I said “Thank you.” He said, “No problem” and walked away. Today, as I was riding the El train, on my way to the senior center, a homeless man began to tell us he had no monies and was homeless. Everyone ignored him BUT this young boy who went into his wallet and gave the man $1.00. When I got ready to leave the El, I told the young boy that I was very proud of him and that he confirmed my believe that not all of our youth were going down the wrong path and I knew that he was going to have a good day because of his kindness. I wish that more people could see some of the good things that our youth do and keep praying for them that are on a bad path to change their ways.

*I say young boys and girls because these people being talked about appear to be between 10 to 18 years of age. A thought just occurred to me – maybe they all just need to be encouraged sometime and be taken to a church sometimes. 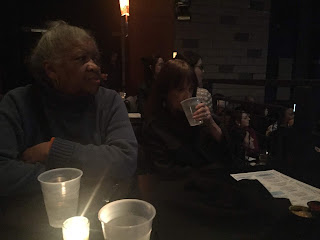 My brother-in-law, Don, is truly one of the few men I know who are genuinely kind, gentle, and caring. An emotional man, he is not afraid to shed tears over both sad and happy events. Nor, does he think twice about embracing a fellow human who is obviously suffering. Don is an artist, a photographer, and carpenter, with a MacGyver-like inventive ability. For example, when I had to use a walker temporarily, and was literally crying over spilt milk, not to mention many other stronger drinks, Don, went down to the basement of my apartment, found discarded materials and in a short time, fashioned a tray complete with cup holder and attached it to my handle bars. To put it mildly, he is always there for me and anyone else who needs him.

Don and my sister, also an artist, live on top of a mountain in southwest Virginia. There, they are very attuned and appreciative of the nature and wildlife that surrounds them. This past summer, they went on a month long trip out west, in a van, celebrating the fact that as aging hippies, they could still do so!

When they returned, Don immediately noticed a dramatically increased population of squirrels who spent their days climbing up the bird feeder poles and disrupting the rightful inhabitants. In his analytical way, Don began remediation by using or making typical squirrel deflectors for birdfeeders. The squirrels were a little too smart for these contraptions, so Don then began his squirrel relocation program. This involved catching the squirrels in humane no-kill traps. Don would then put the cages in his car and drive a minimum of 2 miles, then sent them free in a beautiful wooded area. To date, he has caught and released 45 squirrels in a matter of weeks. You would think this would end the problem, but no, the squirrels kept coming. Along with continuing his deportation program, Don also made an apron-like metal structure that went around the base of the feeder and flared out almost to the ground. This worked for a short time, but the squirrels eventually used a tree limb to jump to the feeder. So Don cut down the limb only to have the squirrels devise a longer, more intricate path to the feeder.

When I spoke to him on the phone last weekend, my non-violent peaceful brother-in-law was considering breaking out the pitchfork and going after the rodents. I assured him he had tried to be reasonable and kind to the rodents, to no avail. I told him I would even support him if he decided to build a wall, but knew he would never want to stop anyone or any animal from enjoying his property as long as they did so peacefully. And that is why I love my brother-in-law. 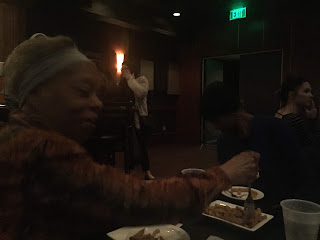 Enjoy your weekend, and as they say on The Moth's podcast, We hope you have a story-worthy week. 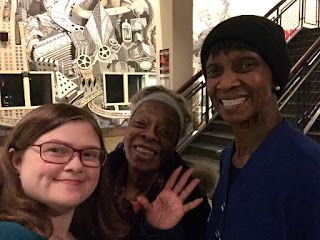