The great thing about Best Day is that not only have we published our older buds stories in our own book, some of our older buds had gone on to write and publish books elsewhere. In fact, we’ll often get visits from published authors who are interested in a little help with their next stories. One of our newest members, Princess, had recently published her autobiography and came in during one of our First Thursday sessions. I asked her to read a short passage from her book, and she talked a bit about her experiences with the genre. This led to a discussion between the rest of the older buds, including Norman who had published his stories before. It just goes to show how much we can learn from each other.

In 1974, I was involved in an organization entitled Living for the City, whose purpose was to create and implement recreation, counseling and job readiness training for North Philadelphia impoverished youth. A couple who had come into some money, purchased a two-story building at 22nd and Lehigh Avenue that they planned to convert into a center for the areas youth. The couple was in need of a staff. They heard about our organization, conducted an interview with us and hired us. At the time of our hiring, we only had three members in the organization: me and Douglas, who were both young counselors at a state operated reformatory, and Alex, a music teacher at Friends Select School. We would spend our evening at the center. I was the activity director and was coordinating with a restaurant executive who envisioned creating a chain of youth maintained restaurants throughout the Delaware Valley.

After several weeks had transpired, the city of Philadelphia became interested in funding the program. They send two representatives to the center to speak to us. During the meeting, they said that we would need a financial person to oversee the monetary segment of the center. I thought that the city’s representatives were supposed to monitor our program, not become a part of it. It seemed to me that my partners were fine with the situation.

I told them that I was capable of handling the finances of the center, because as a caseworker with the Philadelphia Welfare, I was responsible for auditing the finances of over three hundred families associated with the clients housed at Uptown Jewish Nursing Home. I was not about to allow the finances of our organization be manipulated by those I consider to be outsiders, and who I believed to be Poverty Pimps. Also, the executive director of the center was a minister who did not have the welfare of the areas youth a priority. Like the City Hall representatives, he was looking for money and fame.

During another meeting with the representatives, I vehemently disagreed with one of their proposals. My partners agreed with them. My partners believed were in cahoots with the representatives. But I decided to vie my time. We definitely had the respect of the youth in the city, as we, as counselors at the Youth Development center, we developed favorably reputations with the clients. Once we were able to prevent a gang fight that was getting ready to erupt in front of the center. Eventually, a misunderstanding between members of our organization and the center erupted. We left.

After our departure, we connected with a center at 22nd and Ridge Avenue that had created and sponsored the first Pregnant Girl School in the city. Our new organization seemed to also be in the business of Poverty Pimping. They asked us to write a proposal. When we requested help from two Board of Education lawyers who were affiliated with the group, we were denied. When we showed them the proposal we had written, they were amazed at the professionalism it represented. They asked us where we had gotten help and we let them know that the proposal was our product.

I found out, several days after presenting our proposal, that they had given us certain financial information (that was presented in the proposal), that could lead to a fraud investigation. They did not want to give the proposal, so I had to physically retrieve it. Undeterred, we decided to finance our organization by holding weekly discoes in a loft where we had space for a boutique. My questionable partners recruited a lawyer, industrial arts teacher, banker, and parole agent. We now had eight folks in our group. The majority opted for high salaries and downtown offices, I felt that if we were going to help ghetto kids, we should be where they were.

It was apparent to me that I had spent six months in the company of Poverty Pimps who had no concern for youngsters in need of help. I left the group. 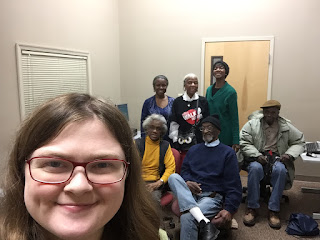 If you your older bud to get published, submit their story here: http://bit.ly/submit1000stories
And if you need a refresher on how to submit stories to “Joy Starts Here,” check out this handy-dandy link: http://bestdayofmylifesofar.org/joystartshere/
Happy reading, and stay warm!