It is my pleasure to announce that two more of our older buds had their stories published in the latest issue of Milestones Newspaper, and you can read Joe and Ann's stories right here. And while you're looking for more Best Day themed publications, why not check out Norman's work here and Eugene's work here? And for even more stories from your favorite older buds, why not buy a copy of the Best Day of My Life So Far book right here?

In honor of our published authors, we posted two brand new stories from Joe and Ann right below:

Right after World War II, it was standard procedure to play the National Anthem at games.  It was just standard for us to show our Nationalism or pride in our nation.  I used to be a big fan of what they call the Friday Night Fights, and they’d play the National Anthem before the fight as well as at baseball games too.  Aside from Canada and maybe Britain, no other countries plan the National anthem at the beginning of a game.

I’ve been hearing about the controversy with athletes kneeling and refusing to salute the flag during the National anthem at the NFL.  I think the easiest solution, the way to stop the protests and make it not a big deal, is to stop playing it at games.  At this point, its old hat, it doesn’t need to be done.  We know that we are a mighty country and we’re comfortable with who we are.  Now it’s just turned into something you do at games, nobody is paying attention to it anymore they are too busy hanging on their cell phones and crap.

Nobody needs the anthem at games anymore.  Just get rid of it and focus on the game.

When I was about 7 years old, my older sister, Ellen, was walking home from Sunday school when our neighborhood babysitter pulled up and asked if we wanted a ride home. Though we were only a few blocks from home, we were excited to ride with Carol who had just gotten her license.

When we got in the back seat, my door did not close and often we had drive a short time, it flew open causing my sister to yell, “Carol, Ann’s door flew open!!” Being a new driver, Carol forgot she was driving and turned around to close my door as the car crashed into a tree.

In the days before seatbelts, my sister and I flew into the back of the front seat. I hit my mouth bashing my front teeth into the roof of my mouth and Ellen, my sister being taller, ripped her chin open. We looked at each other and screamed. Bloodied, but not seriously hurt.

The local cop who arrived at the scene thought it best to drive us home to our pa parents. As we pulled up to our house, my father was calm as he mowed the lawn, was shattered at the sight of his 2 bleeding daughters running out of the car and into his arms. The cop kept yelling, “They’ll be okay, they’ll be ok. They were in an accident.” My shaken father led us to the back door where my mother was in the kitchen cooking Sunday dinner. She too was shocked and badly shaken, but as the adrenaline kicked in, she was able to sit us down and tried started cleaning us up.

Suddenly, it seemed that neighbors appeared out of nowhere giving us all comfort. At one point, someone said, “Get Jean (my mom) a cup of coffee” and someone else said “Get Paul (my father) a stiff drink!”

It was obvious that we needed medical attention so a neighbor volunteered to drive my mother and Ellen to the emergency room for stitches. Another neighbor called D. Cowan, a dentist who lived a few blocks away. He agreed to open up his office. In the city and appeared in our driveway a few minutes later. His teenage daughter was in the backseat surrounded by stuffed animals and children’s books. She cuddled me all the way to the city alternately reading me stories and singing me songs. I don’t remember much about having 6 teeth extracted as I guess they used laughing gas. When my father and I arrived home, my sister was seated at the table with a heavily bandaged chin after receiving 20 stitches. Neighbors still buzzed around us preparing soft meals, mashed potatoes, pastas, etc.

As Ellen and I recovered over the next few days we were treated to milkshakes, popsicles, and visits from neighbors bearing gifts of comic books and coloring books. We both decided our ordeal wasn’t that bad after all. As our bruises and swelling improved, my mom burst our bubble and sent us back to school. There too, we were greeted with kindness.

These events took place during a time when kindness, compassion, love of family and community were nothing unusual or unexpected. Unfortunately, it sometimes seems to me that these qualities are often the exception rather than the rule. I hope I am wrong. 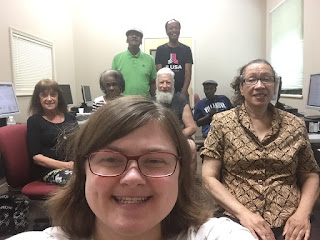