One Book, One Philadelphia (Nouria) 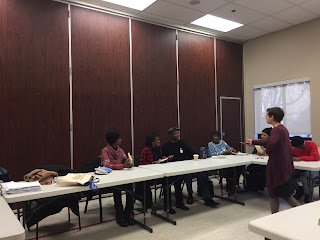 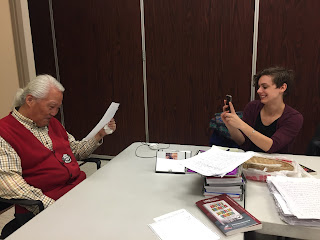 Then she read a few excerpts from Another Brooklyn about the mutability of memory and what people choose to remember. It fit Best Day pretty well, because we know how powerful another person's memories can be; in written or oral form. After that, each older bud read Brittanie one of their most recent stories and we took a senior selfie. And I took a picture of Benita taking a selfie of us, and Benita took a picture of me taking a picture of her taking a selfie of us! 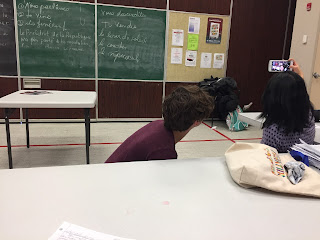 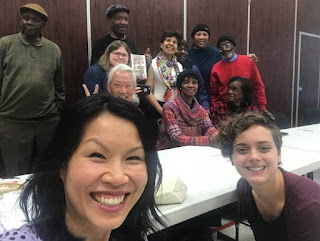 So thanks a billion to Brittanie and the people of the Free Library of Philadelphia for checking us out, sharing their books, and listening to our stories. Brittanie, if you're reading this then you've heard the following story already. But I wanted to share one of the stories that were read aloud but not yet featured on our blog.

Back in 1999, my oldest daughter (Ghada) graduated from highs school in Casablanca, Morocco, and she wanted to come to the United States, Florida for the university. I came with my three other kids to prepare for her arrival.
One time I was driving with my youngest daughter (Emma) by a church and I saw that they were giving classes. I stopped and began to write the schedule at this time a minister (Gary) came. He told us that they didn’t give English classes (what I thought) but bible classes. Then he asked where we ere from, what language we were speaking. When he knew we spoke French, he was excited because his daughter (Heather) who was the same age as my oldest daughter Ghada, just began a French class in high school. He then called her and asked her to come meet us. She came and after that, he invited us to have dinner in his house, he called his wife Tammy and told her to make dinner. "We have guests" he said. He came with me to the motel to tell my other daughter (Sanaa) and my son (Amine). We had a good time at dinner, he took us to visit every corner of his big and beautiful house. Downstairs, they had attached to the house, a little apartment where his mother-in-law used to live.
After dinner, he asked me how long I’m going to stay in the US. I said two weeks. Then he said, what do you think about living with us these two weeks in the little apartment. I was very happy and accepted his suggestion. He gave me the keys of his house and we went the same night to the motel to take our stuff. We spent two weeks with them.
After dinner the 2nd or 3rd day, I asked him, how did he know to trust me at this point, to give me his house keys the same day we met, even though he didn’t know anything about me or my family. He didn’t have any proof of my background. He said that he worked with a lot of people and could know the sincerity of someone after talking with him.

Brittanie also wrote about her visit to Best Day on the Free Library of Philadelphia's blog. You can read her post here. 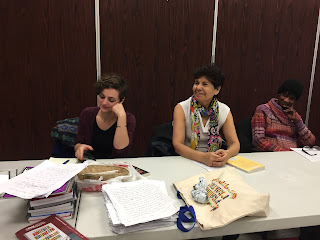