The Philadelphia Senior Center is closed for today's Broad Street parade. And even if they hadn't, I'm pretty sure all the older and younger buds will be too busy celebrating this historic win anyway. So here's a collection of some Eagles and football themed stories to get you all in the spirit! We weren't wearing silver and midnight green in these pictures because they were taken last week. And just because we were wearing red and blue didn't mean we were rooting for the Patriots, either! ;) 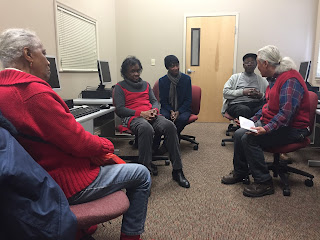 
I Had A Lovely Day Today And The Snow Had Left (Thank God For That.)


I had a lovely day today and the snow had left (thank God for that.) And I had fun sitting with my young teacher and we had so much fun talking with her. And I am so glad that she was chosen to be the teacher of this workshop. God chose her to be the leader of the workshop; it was a good choice. She’s much less nervous too. And I’m glad Benita was my teacher too and she made a good choice for a new teacher. Maybe one day she’ll visit us today.


It was a pleasure to have my son drive me to the center today. He’s my power of attorney and my nurse’s aid and a good son. There must be something wrong with my apartment, because my son’s going around and taking pictures. And the manager came up to inspect the apartment, but my son showed him the pictures so he knew I kept it clean. The manager of the complex where they fix things lied to me more than once. He said he got his work done, but he didn’t fix anything in my place since 2013. And I prayed to get everything sorted out, and it did! Now the manager doesn’t speak to me anymore and he got caught. I hope I’ll get moved to a better apartment soon.


Whenever we write, I hear the music from the other room, while they were doing their dance class. And I loved listening to music while I write so I just dance in my chair.


I was a Black Panther when I was a young girl. Loretta Gorham, yes I was. You can look down at the website at the Black Museum downtown, look up Loretta Gorham. You know Morona Africa? She came out of Munchie Prison and she was a friend of mine. And I was with many more and (I’m laughing because my writer can’t hear so well!) You don’t believe me, look in the Black Museum in Black History.


I put God first and me second. I’m laughing with these people in the class. May God bless the readers.


I have a dead man taking care of me and this is what I get. My late husband Rob Gaither, related to Omar Gaither who went down south with the Sixers, with the Eagles. You always get caught when you try to get wise.


I always laugh with them in the class. And teacher, always be aware of people who laugh. I smile upside down, I’m going downstairs to wait for my ride. Over and out, God bless the readers. Signing off.

All through my life, I have heard about how kids can’t stand school, they want an endless summer holiday.
When I was 10 years old, I also started counting the days before the beginning of the school. I always thought that I had enough holidays and began to look forward to going to school. I usually enjoyed going to school.
Even during summers, I dreamt – amused in school at my class with my classmates. I missed them. I became a football fan when I was 17 years old. We used to play “kicking the ball” without running.
There was a show on the radio named “Children’s Hour” which came on Sunday morning during summers. Thy used to sing certain songs about certain seasons of the year. Right around the fall, they would sing this song “Mr. Touchdown USA” and another one as well. The only reason I remembered the other song was because it went like this “You have to be a football hero to get along with girls.”
Football is the only game I used to think about during autumn. I liked the smell of air and think about the smell of burning leaves.
Just like in spring, I can always identify the season because of the smell of DDT.
I guess autumn is the favorite time of the year and my birthday is also in autumn, October.
I guess even Humpty Dumpty’s favorite time is autumn because he says he had a great fall. Ha Ha Ha.

Years ago, when my husband and I were working full time jobs, Saturday was always welcome.
Although it meant grocery shopping, house cleaning, and family time, there was a “toss-up” as to who would have time off for fun.  Would it be him or me?
This particular day, I was able to join my card playing club for a few hours.  After which we proceeded to enjoy a fantastic repast at a restaurant.
Returning home at early evening, as I opened the door, the television was blasting.  My three-month-old son, securely wrapped under his dad’s arm, was sound asleep in the easy chair.  A squad of about five empty nursing bottles was on the floor by the chair.
I grabbed my child and let the popular football game continue to traumatize my husband.

Twenty-five years ago, I had a store in Center City. A young woman came into my store.
I said, “You remind me of another girl that came into my store.” She said, “You say that every time. My husband plays for the Eagles and I live across the street. Here is my phone number. Call me when she comes in.”
When she came in, I called her and she came in.
They started to scream. I found out they were roommates in college and didn’t know where they were located after school. They looked nothing alike and could not believe I put them together. 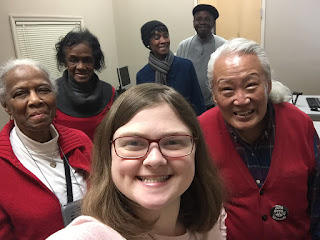