If you live in or near Philadelphia, then you know that we've had some nasty storms lately. Nasty enough to close down the PSC because the streets and sidewalks would be that unsafe. But while I don't have any new stories this week, I do have some older ones. Sometimes after an older bud finishes their story, they'll either go into more detail or a conversation will pop up around it. Either way, it'll be so interesting that I write it all down and save it for a rainy day. Here's a few of those stories to warm you up during the winter storms.
Fair warning, Joe's stories uses the word "Negro" to describe Black people. It's in the context for the 40's when that word was commonly used, but I figured I'd give a heads up just in case. 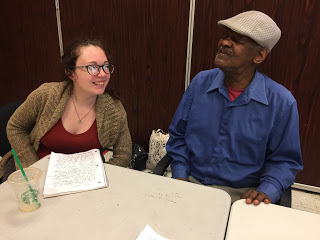 
Joe: And the reason why I chose Jackie Robinson is because, well number one I like sports. Number two, I used to like baseball, I used to follow baseball when I was younger. We call baseball America’s Pastime, and ever since I read that the game was invented in 1869, but the first organized baseball leagues were started, believe it or not, in 1883. And up until 1947 it was an all white sport. You didn’t have any, any people of color playing. Oh, they played but they weren’t accepted into the organized um baseball leagues that we know today; that is the National American League. Then in 1945, Branch Rickey, who was president of the Brooklyn Dodgers, had gone down to watch the players from the—what’d they call it—the Negro leagues back then. And there was some very, very famous Negro ball players that participated in that league. There’d be like Josh Gibson, Satchel Paige—In fact, Satchel Paige played baseball, believe it or not, all the way up into his mid-fifties.


Well, Branch Rickey discovered Jackie Robinson and he liked his style of play, and he came back that year and he told some of the other owners about this great find. And he would’ve liked Jackie to play for the Brooklyn Dodgers. In 1947, Jackie finally did break the color barrier, and he was the first Black American to play in the national leagues. But his first couple of years that he played, there was a lot of ill will against him, a lot of prejudice against him. In fact there was particular instance that I don’t remember but I heard about it, and I really believe that it actually happened. That somebody in the stands released a black cat onto the field and yelled out to Jackie Robinson, “Come get your brother.”


Elliot: That would be in Philly.


Elliot: That person was right here.


Joe: Yeah, because the Phillies were a very prejudiced team back then. However, one of the first baseball players to really accept Jackie Robinson as an equal was Peewee Reese, a White ball player. But he encouraged Jackie to keep the faith and keep on with his dream. And he did and in fact, everybody who knows baseball knows Jackie Robinson’s number, they know what he did on the baseball field, and he is revered by most baseball players. And again I say I decided to do a piece of Jackie Robinson because he really was a part of Black History. 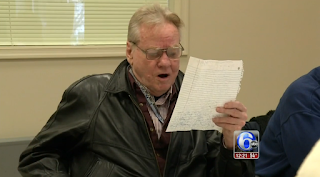 
Mo: Thinking of having a young lady in there just was considered too dangerous. Even a tomboy like Joanie couldn’t have…Well, you know.


Anyway, you girls have gotten some short shift…shrift, I guess is the word. And um you’re still getting some in a sense. And it’s changed, but not enough.


Frances: Well, not all of us even had any desire to ride in the back of a truck.


Mo: Well, that’s because you hadn’t seen me and my cousin Johnny or Frankie! (laugh)


Frances: Well, they would deal with the…in the back of a pick-up truck maybe.


Mo: They had more fun! Every time we passed a car, we’d holler, “Get a horse!” We thought we were big shots. But there was a certain freedom being back there.

Thanks again for reading, and I hope you're enjoying the snow when it's safe to do so, and warm and cozy indoors when it's not.
Curated by Caitlin Cieri
Newer Post Older Post Home