Days of Service (Nouria and Elliot)

Martin Luther King Day has passed this week and the second Women's March will be happening this Saturday. It only makes sense to use today's post to encourage the feelings of empathy and dedication that define both days. Between the cries of "Me Too," "Black Lives Matter," and all the other groups rallying for justice, it's easy to forget how much of a problem ageism is in our country. It's easy for people to ignore the elderly or dismiss them as senile or curmudgeonly or old-fashioned. It's easy for people to lose touch with an older relative when they're in a retirement home. It's easy for people to treat their complaints as part and parcel of old age, even when their concerns turn out to be valid. A few of my older buds have to leave Best Day before it's barely begun, just to accommodate their shuttle service's schedule. I heard it used to be the other way around, but the older buds put up with it because "It's better than nothing." Every older bud deserves much better than "better than nothing."

For today's post, I wanted to pay tribute to both Martin Luther King Day and the Women's March by featuring a Black writer and a female writer. Of course, we have plenty more to choose from than just Nouria's and Elliot's writing, and we encourage you to read the writings of Joe, Norman, Eugene, Frances, Loretta D., Dolores, Joan, and Hazel in honor of both days. 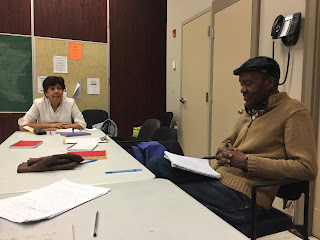 Back in 1999, my oldest daughter (Ghada) graduated from highs school in Casablana, Morocco, and she wanted to come to the United States, Florida for the university. I came with my three other kids to prepare for her arrival. One time I was driving with my youngest daughter (Emma) by a church and I saw that they were giving classes. I stopped and began to write the schedule at this time a minister (Gary) came. He told us that they didn’t give English classes (what I thought) but bible classes. Then he asked where we ere from, what language we were speaking. When he knew we spoke French, he was excited because his daughter (Heather) who was the same age as my oldest daughter Ghada, just began a French class in high school. He then called her and asked her to come meet us. She came and after that, he invited us to have dinner in his house, he called his wife Tammy and told her to make dinner. "We have guests" he said. He came with me to the motel to tell my other daughter (Sanaa) and my son (Amine). We had a good time at dinner, he took us to visit every corner of his big and beautiful house. Downstairs, they had attached to the house, a little apartment where his mother-in-law used to live.
After dinner, he asked me how long I’m going to stay in the US. I said two weeks. Then he said, what do you think about living with us these two weeks in the little apartment. I was very happy and accepted his suggestion. He gave me the keys of his house and we went the same night to the motel to take our stuff. We spent two weeks with them.
After dinner the 2nd or 3rd day, I asked him, how did he know to trust me at this point, to give me his house keys the same day we met, even though he didn’t know anything about me or my family. He didn’t have any proof of my background. He said that he worked with a lot of people and could know the sincerity of someone after talking with him. 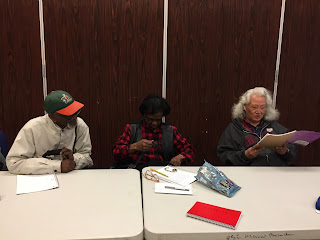 Elliot Doomes
11.16.2017
Beulah May
My grandmother was strong too. Everybody called her Miss Beulah. That’s how strong she was. She weighed two hundred and forty-four pounds and she wasn’t fat neither. She was broad in the shoulders and powerful. She worked when she was eight and there wasn’t easy work for her back in the day. They wouldn’t even let you go to school until after the farm work was done. She could read and write and count.
You couldn’t cheat her out of money, that’s for sure. They just didn’t let kids go to school much in the South. She was next to the youngest out of four daughters, but she was the leader of the family. All the ones who migrated to Philadelphia went straight to her, that’s how I knew them. I never would’ve met them otherwise; I didn’t know anything about the South. 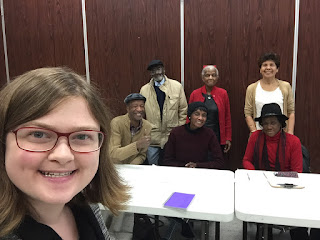 If you want to keep our older buds visible and audible, especially older women and Black seniors, please take a moment to visit our front page and see all the different ways you can keep Best Day going. You can buy our book here, make a monetary contribution here, spend some time at one of our workshops, or even just share our stories with friends and family. Thank you, and good luck.
Curated by Caitlin Cieri
Newer Post Older Post Home